A little fun with tournaments (graphs).

Assume $G$ is a tournament, i.e. a (finite) directed graph such that between any two vertices, $a$ and $b$, there is at least one edge in one of the two directions, $a\rightarrow b$ or $b\rightarrow a$. 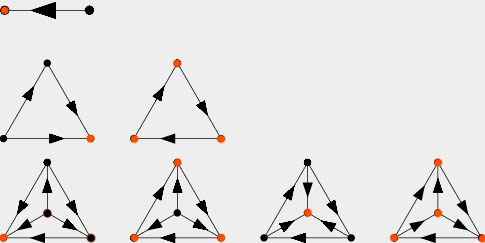 these are all tournaments and the $\color{red}{\text{red}}$ dots are the losers. Notice how there is always a cycle joining them.

This question was mostly answered in my answer to this other question. Instead of typing it all over again, I will quote from that answer. A digraph is strongly connected if there is a (directed) path from every vertex to every other vertex.

Proposition I. A tournament $T$ on $n$ vertices ($n\gt1$) has a Hamiltonian cycle if and only if it is strongly connected.

Proof of the nontrivial direction, quoted from my previous answer:

In this case, the cycle $C$ contains all vertices of $T$; so $m=n$ and everything is fine. We shall see that each of the other cases leads to a contradiction.

If $u\in C$ and $v\in W$, then there is no path from $u$ to $v$, contradicting the assumption that $T$ is strongly connected.

If $v\in W\cap L$, then we can insert $v$ between two consecutive vertices of $C$ so as to obtain a cycle of length $m+1$, contradicting the assumed maximality of $m$.

Since $T$ is strongly connected, there must be a directed edge $uv$ for some $u\in L$, $v\in W$. Then the vertices $u,v$ can be inserted in the cycle $C$ so as to obtain a cycle of length $m+2$, contradicting the assumed maximality of $m$.

Proposition II. Every tournament has a Hamiltonian path.

The easiest way to prove this is to consider a longest possible path in $T$ and show that, if it does not contain all the vertices, then we can construct a longer path. Another way (Rédei's theorem) is to use the in-and-out principle (aka inclusion-exclusion) to show that the number of Hamiltonian paths in $T$ is an odd number, therefore nonzero. Yet another way is to prove the Gallai-Milgram theorem which has Proposition II as a special case. A very silly way is to derive Proposition II from Proposition I about Hamiltonian cycles, which is what I will do.

Proposition III. The subtournament on the set of all "losers" is strongly connected; hence it has a Hamiltonian cycle, provided there is more than one loser.

[Theorem 2 of my previous answer is essentially equivalent to this, but stated in terms of "winners" rather than "losers".]

Proof. Let $T$ be a tournament. Let $S$ be the set of all vertices $v\in T$ such that, for each vertex $u\in T$, there is a (directed) path from $u$ to $v$. (I will show that $S$ coincides with the set of all "losers" as defined in the question, i.e., the last vertex of some Hamiltonian path; this is just a simpler and more natural way to define them.)

17
Prove that every tournament contains at least one Hamiltonian path.
0
finding number of unique outcomes of round-robin tournament with cycle
1
A directed bichromatic tournament