On finding the nondominated set of vectors. How to understand this algorithm?

I found the following recursive algorithm to find all the nondominated vectors in $S$.

What am I missing here? Did I misunderstand the algorithm in some way?

The original article is:

Algorithm presented here is a paraphrased Algorithm 3.1 in the article. The only major difference is that they use the term "maximum" and I use "nondominated" 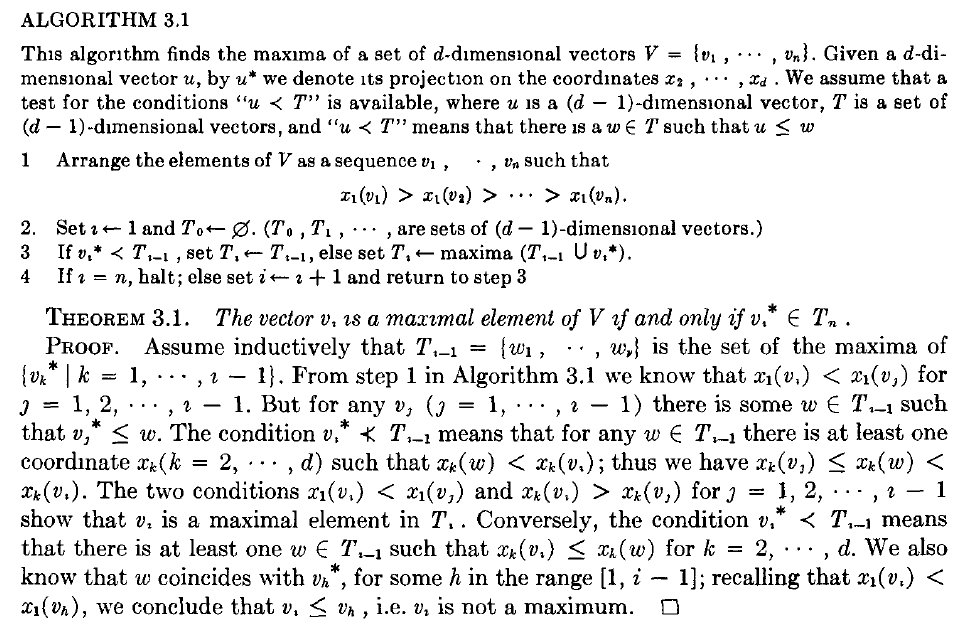 It may happen that $v_i^*$ gets dominated by $v_j^*$ for some $j>i$ in subsequent steps, as in your example. But vectors $v_j$ with $j>i$ cannot dominate $v_i$ since they are smaller on the first component.

Not the answer you're looking for? Browse other questions tagged geometry algorithms computational-geometry recursive-algorithms or ask your own question.

6
Is there an efficient algorithm to find a length maximizing combination?
2
Volume of n-dimensional convex hull
1
Finding the major and minor axes of an $n$-dimensional ellipse
1
Is the following algorithm to check if a point is on a line correct?
2
Sort vectors according to their distance between them
2
Number of diagonals in $n$-hypercube perpendicular to the diagonal.
0
how many linearly independed vectors combinations may I extract from a set of vectors
3
Algorithm for Finding the Extreme Rays of a Polyhedral Cone
2
Finding a vector orthogonal to n n-dimensional vectors