Parallel transport on the Group manifold

We think of the group as a manifold G (called a Group manifold), whose points are the elements of our Lie group. More generally, we could think of any manifold H on which the elements act as smooth transformation

The infinitesimal group elements are to be pictured as particular vector fields on G (or, indeed, H). That is, we think of ‘moving G’ infinitesimally along the relevant vector field $\zeta$ on G, in order to express the transformation that corresponds to pre-multiplying each element of the group by the infinitesimal element represented by $\zeta$. 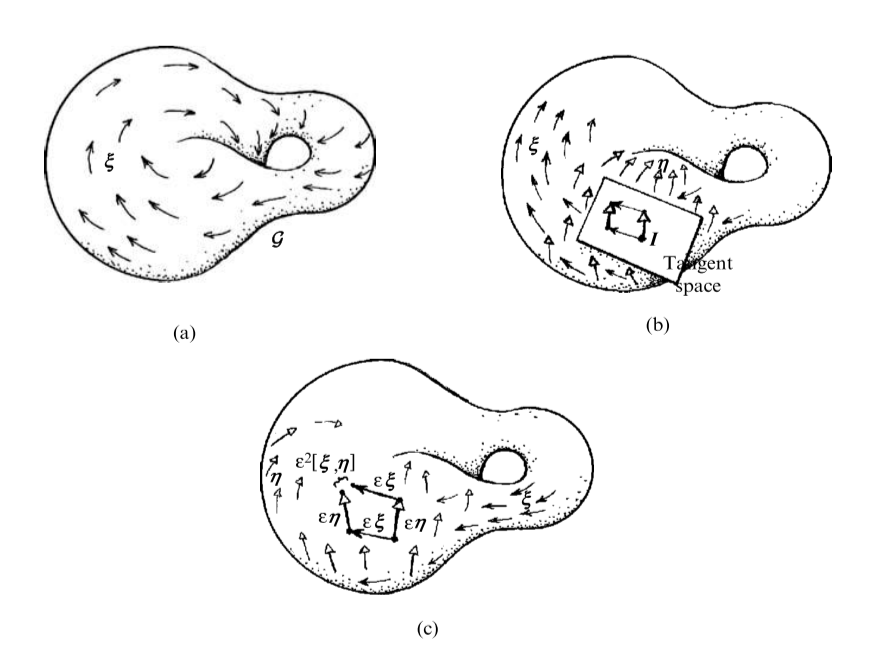 Could someone explain what Penrose is meaning by the bolded part? I understand the group action is to move the points under flow of vector field but what does mean for the parallelism to come from it?

I have read these answers but found the discussion to be too algebraic. Could a more visual understanding of what's going on be provided?

The connection that Penrose is referencing is called the Maurer-Cartan connection, defined by the Maurer-Cartan form $\theta\in\Omega^1(G,\mathfrak{g})$. The assertion that the connection has no curvature is known as the Maurer-Cartan equation, which states that $$d\theta+\frac{1}{2}[\theta,\theta]=0$$ Edit: The Maurer-Cartan form is defined in the most natural way you could imagine, since we have a group structure on $G$. Denote left multiplication with $g$ by $L_g$, which is a map $G\to G$. We define the $1$-form as $\theta_g(v):=dL_{g^{-1}}v\in T_eG=\mathfrak{g}$, which gives rise to a Lie algebra valued $1$-form. This allows us to identify the fibres of the tangent bundle with one another, which is equivalent to the data of a connection which we denote $\nabla$. A vector field $X$ is called "parallel" or "horizontal" along a curve $\gamma:I\to G$ if it satisfies $$\nabla_{\dot{\gamma}}X=0$$ The way in which one might think about this geometrically, is as follows. On Euclidean space, it is quite clear when we should call a function flat in a certain direction: when its directional derivative vanishes. However, on vector bundles over manifolds, there is generally no canonical way to choose a directional derivative, i.e. a way to differentiate sections along vector fields. This is what a connection does. The way we can think about parallel sections, then, is by thinking about them as being constant with respect to the chosen connection.

In Riemannian geometry, we add a Riemannian metric to $M$ (i.e. a certain two-form with some conditions imposed on it) to allow us to measure the angles and distances between vectors in the tangent space to $M$. We can go even further by equipping $M$ with an affine connection $\nabla$, and an associated parallel-transport map $P_{x\to y}:T_xM\cong T_yM$, which we remember is determined by the extra data of the connection $\nabla$. The parallel-transport map is a canonical isomorphism of tangent spaces, but only up to the choice of a connection $\nabla$. It would be especially nice if there were a natural canonical choice for a canonical isomorphism of tangent spaces.

Any Lie group $G$, which is a smooth manifold with a smoothly compatible group structure, does have a natural notion of parallelism (i.e. natural identification of tangent spaces) which is described nicely in the other answer.

18
Lie bracket is a connection?
10
Why do we need a Lie derivative of a vector field?

5
Manifold of fixed points
18
Lie bracket is a connection?
1
Vector field invariant under transitive action: restricts to free transitive action?
31
Meaning of Exponential map
3
Relation between the Lie functor applied to a Lie group action, and the fundamental vector field mapping?
4
Infinitesimal Generator of Local Group of Transformation
1
Difficulties understanding one-forms
4
Tangent bundle of a manifold as more than a vector bundle