How do we formally and precisely specify a directed angle?

I haven't been able to find a precise explanation of what a directed angle is. I encountered the concept in Chapter 15 of Spivak's Calculus, where he simply says

I googled and found this document, which sort of sheds a bit of light. We specify a directed angle as an ordered pair $(\vec{OA}, \vec{OB})$ plus a direction. However, they specify the direction with a picture, as in 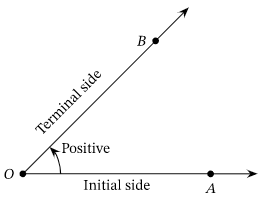 Also, apparently it is by convention that if the direction is counterclockwise, then the angle is positive, and if clockwise then it is negative.

When I think about it, in common usage, it seems we say $50^{\circ}$ or $-70^{\circ}$, and this is a measure of magnitude of an angle. We associate the magnitude with a particular angle. We know that if the magnitude is negative, for example, then the angle is being measured counterclockwise.

Is this in fact the notation to specify a directed angle, ie the magnitude?

I found the following definition of a directed angle here

Definition: Given any two non-parallel lines $l$ and $m$, we defined the directed angle $\angle(l,m)$ to be the measure of the angle starting from $l$ and ending at $m$, measured counterclockwise.

Proposition: For any lines $l$ and $m$, $$\angle(l,m)=-\angle(m,l)\tag{2}$$ (In other words, measuring the angle clockwise instead of counterclockwise corresponds to negation).

I'm not sure I follow the calculations. I'm not too familiar with modular arithmetic.

But as far as I can tell

Also, are these calculations general in the sense that they explain why when we measure angles in a clockwise direction they are negative? I would guess not.

Is the reason rather just convention? The convention being that when we specify a directed angle as an ordered pair $(l,m)$, by default we mean counterclockwise?

A directed angle is defined by a base ray, and and another ray sharing the vertex. The angle is measured from the base ray in the counterclockwise direction to the secondary ray and may exceed 180.

The angles in calculus and trigonometry are directed angles where the base ray is understood to be contained in the $x$-axis with the vertex at the origin and the ray directed in the positive direction.

In Euclidean geometry, an angle is just a vertex and two rays.

However, "angle" is also used to designate the measure of a Euclidean angle, where measure is just the ratio of a circular arc centered at the vertex to the radius of the circular arc. This is, however, ambiguous because there are two possible circular arcs.

The size of a geometric angle is usually characterized by the magnitude of the smallest rotation that maps one of the rays into the other.

Angles that have the same measure (ie the same magnitude) are said to be equal. 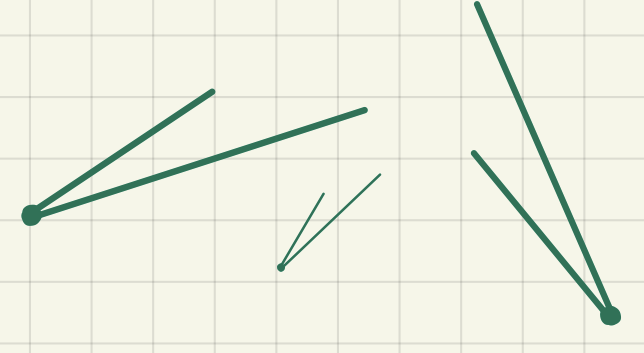 It is possible for two angles to have the same Euclidean angle specification (same vertex, same rays), but to have a measure that differs by an integer multiple of a turn of the chosen circular arc used to measure the angles. These angles are called coterminal, and any angle has an infinite number of coterminal angles.

A convention is used to allow positive and negative angular values to represent orientations and/or rotations relative to some reference. In a 2D Cartesian coordinate system, this reference is the positive x-axis.

Note that the notions of clockwise and counterclockwise depend on the x-axis being positive to the right.

I've been wondering all along what exactly is the specification of a directed angle?

Consider the five examples below 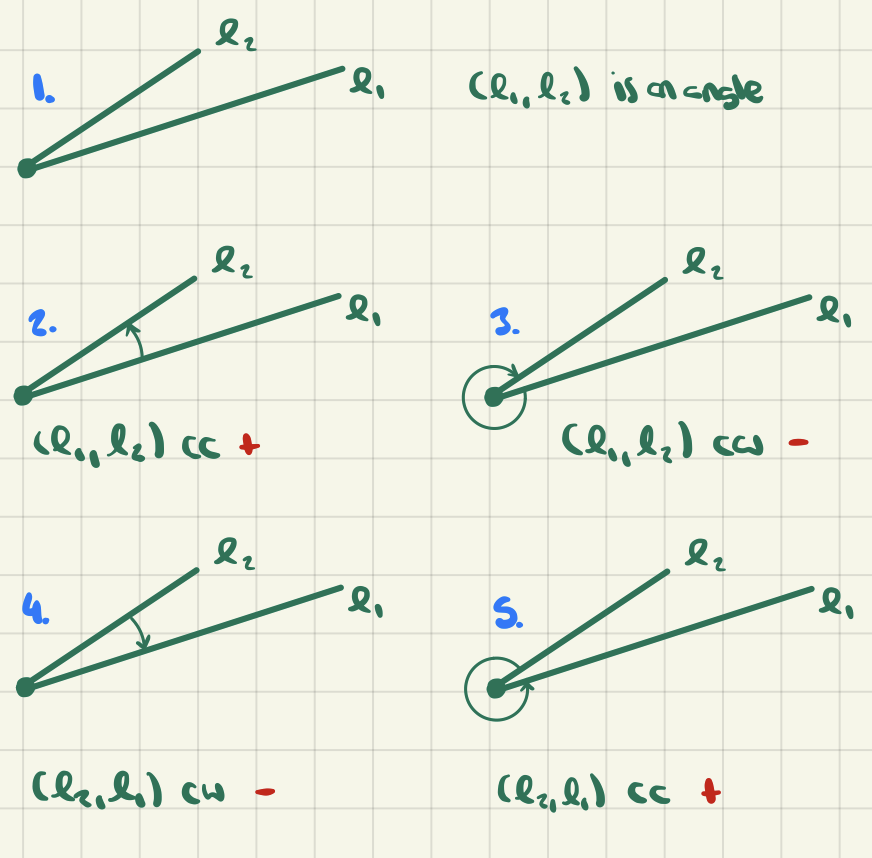 If $l_1$ and $l_2$ are rays (and I am assuming that however we specify the rays it includes the specification of the vertex), then $(l_1,l_2)$ specifies the Euclidean angle $1$.

If we make it a convention that if we omit the orientation then the default is counterclockwise, then $(l_1,l_2)$ specifies $2$.

On the other hand, when we use angles in, say, calculus, we simply write things like

and we know the directed angle being referred to. It seems that this is the case because to a specification such as "$(l_2,l_1)$ clockwise" we attach a number, namely the measure of the angle.

Spivak sort of says this in Ch. 15 of his book Calculus

Despite the aura of precision surrounding the previous paragraph, we are not yet finished with the definitions of $\sin$ and $\cos$. Indeed, we have barely begun. What we have defined is the sine and cosine of a directed angle; what we want to define is $\sin{x}$ and $\cos{x}$ for each number $x$. The usual procedure for doing this depends on associating an angle to every number

Anyways, my point is that there does seem to be an actual underlying concept of a directed angle that comes before measuring it and assigning a number to it.

To my knowledge, the best way to define directed angles goes through the following steps.
Since you are requesting for the conceptual definition I am just pinpointing the conceptual steps waving (yet not compromising) on rigorousness.

Note that this is the same conceptual step as that of passing from the segments $\overline {AB} ,\overline {BC}$ along a given line, to the directed segments $\vec {AB} ,\vec {BC}$ upon having fixed a direction along that line.

Again, this is conceptually the same as that of passing from the segments $\overline {AB} ,\overline {BC}$ on a $2$-d plane, to the directed segments $\vec {AB} ,\vec {BC}$ upon having fixed a sign and direction (a unit vector) to each.

e) Passing to a general $n$-d space, the cross-product generalizes to a wedge product and the association dot and cross product to the geometric product.

The analogy with the undirected / directed line segments continues .

Not the answer you're looking for? Browse other questions tagged calculus geometry derivatives trigonometry angle or ask your own question.

2
Direction of x-axis with respect to y-axis in Cartesian coordinate system?
0
Help needed in understanding following geometrical statement.
1
How to measure an angle in a polygon that is more than 180?
0
Negative Angles
3
How to prove the directed angle cyclic quadrilateral theorem?
0
how do I prove that $∡ (ℓ, m) + ∡ (m, n) = ∡ (ℓ, n)$
2
Understanding $\tan\theta=\left|\frac{m_1-m_2}{1+m_1m_2}\right|$
0
Why is this angle taken as negative?