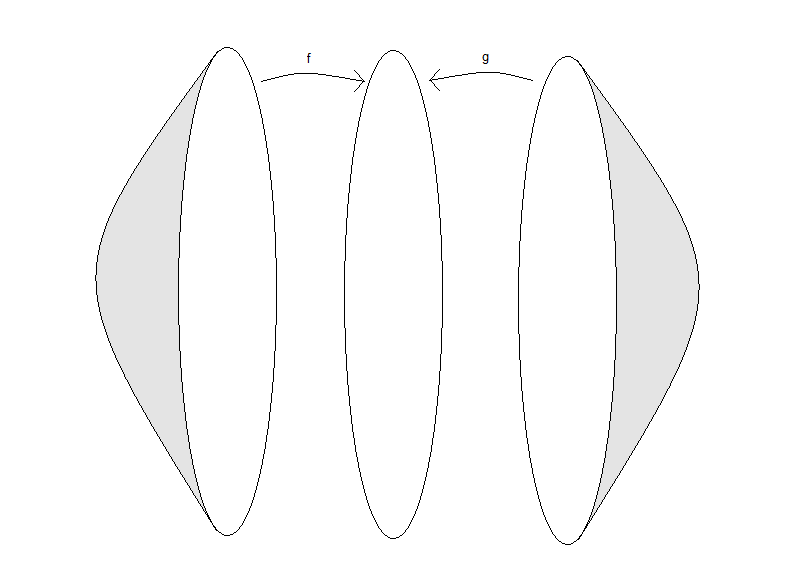 I want to show that $M$ is homotopy equivalent to the sphere $S^2$. How can I go about doing it?

Intuitively I can sort of see what's happening. On the left side, we're identifying points along a $p$-gon around the border of the disk, and on the right, we're doing the same for a $q$-gon. When we're gluing them together, since $(p,q) = 1$, I can see how everything gets identified to itself, and results in a $pq$-times folded circle $S^1$. But this is not at all a formal solution, and I don't even know if it's correct (because it's not a formal solution).

van Kampen implies that $\pi_1 \text{Cone}(f,g) = \Bbb Z/(p, q)$, where $(p,q)$ denotes the ideal generated by these (equivalently, the ideal generated by their greatest common denominator). In your case, this is the trivial group. I disagree with the commenter that the result is $\Bbb{RP}^2$ for $q = 1$ (in fact, in that case the result is homotopy equivalent to $S^2$ simply by collapsing the right-hand disc).

4
Hatcher - simplicial and quotient representations of spheres
2
Let $X$ be the complex obtained by gluing two discs to $S^1$ via maps of relatively prime degree. $X$ is simply connected.
6
Is this space $S^3$?
3
How to prove (rigorously) that these spaces are homotopy equivalent?
3
10-gon as connected sum of tori or projective plane
2
Punctured torus with antipodal boundary points identified
1
Fundamental group of two copies of $S^2$ joined (separately) at their north and south poles