You are probably familiar with "mirror anamorphosis," the rendering in a painting of a distorted figure that can be undistorted by viewing in an appropriately tilted or curved mirror. The skull in the Hans Holbein painting (the streak at bottom center) is perhaps the most famous example: 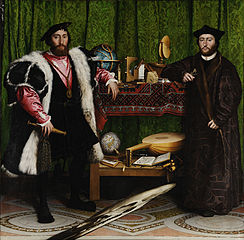 (Image from Wikipedia article.)
My question is: Is there a mirror which "undistorts" an Escher Circle Limit engraving? Here is Circle Limit IV: 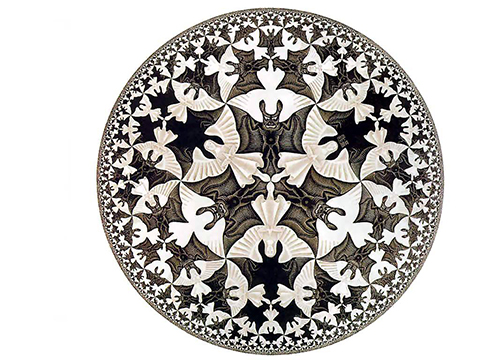 (Image from here.)
"Undistorting" would render the angels and devils the same size, off to $\infty$. The figures would still shrink in distance, but as if they were on a plane, rather than in the Poincaré disk. In other words, the mirror view would give the illusion that the figures are on a plane.

Well, you know that the Euclidean and the hyperbolic planes are not conformally equivalent, so it’s not clear to me what you’re asking. When you say “render the angels and devils the same size, off to $\infty$”, you aren’t asking for them to appear to the viewer as if they lie on a plane in such a way that they’re the same size on the plane, are you?

EDIT in response to your clarification:

It’s quite, quite, impossible, for any number of reasons. First, the devils are, or should be, congruent to each other in the Poincaré model of the hyperbolic plane, and thus would have appear to be congruent to each other in the apparent Euclidean plane. But the groups are wrong. You know that there are only the 17 groups of wallpaper patternings, and the group here is not one of these. If you don’t like that reason, think of a two-step map from the Escher to the Euclidean plane, first by your mirror, then from your eye to the apparent Euclidean plane. This would again be a conformal isomorphism, more exactly anticonformal because of the reflection, between the plane of the Escher and the Euclidean. And finally, figure out a fundamental domain in the Escher, not making use of the reflections that exist in the pattern. So, a domain that can be moved rigidly to exactly tile the whole. I think it’s one devil plus one adjoining angel, but when I look closely, my eyes start to cross. Anyhow, you’ll be far better at this than I could hope to be. Then convert it to a fund. domain that’s polygonal in the sense that its sides are segments of geodesics. Then count up the sum of the angles. Alternatively, persuade yourself that such a domain can’t tile the Euclidean plane.

Not the answer you're looking for? Browse other questions tagged geometry transformation art or ask your own question.

1
Number of bounded volumes in M C Escher's Woodcut Waterfall
2
comparing angle in measurement for concave mirror
0
How to enlarge a circle?
2
mirror reflection
4
Cylindrical Mirror Anamorphosis – Development of a System of Equations