How to find a random axis or unit vector in 3D?

I would like to generate a random axis or unit vector in 3D. In 2D it would be easy, I could just pick an angle between 0 and 2*Pi and use the unit vector pointing in that direction.

But in 3D I don't know how can I pick a random point on a surface of a sphere.

If I pick two angles the distribution won't be uniform on the surface of the sphere. There would be more points at the poles and less points at the equator.

If I pick a random point in the (-1,-1,-1):(1,1,1) cube and normalise it, then there would be more chance that a point gets choosen along the diagonals than from the center of the sides. So thats not good either.

But then what's the good solution?

You need to use an equal-area projection of the sphere onto a rectangle. Such projections are widely used in cartography to draw maps of the earth that represent areas accurately.

One of the simplest such projections is the axial projection of a sphere onto the lateral surface of a cylinder, as illustrated in the following figure: 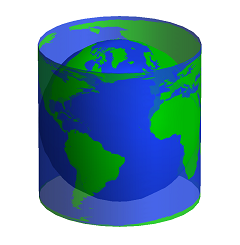 This projection is area-preserving, and was used by Archimedes to compute the surface area of a sphere.

The result is that you can pick a random point on the surface of a unit sphere using the following algorithm:

This works because the standard multivariate normal distribution is invariant under rotation (i.e. orthogonal transformations).

This has the nice property of generalizing immediately to any number of dimensions without requiring any more thought.

You can also do this. Generate three random numbers $(a,b,c)$ in $[-1,1]$; if $a^2 + b^2 + c^2\le 1$, then normalize them. Otherwise try again and pick triplets until you have a usable triplet. The volume of the cube we pick from is 8. The volume of the unit ball is $4/3\pi$, so typically you will choose roughly two triplets to get one good random vector on the sphere.

Courtesy of the total Compendium from computer graphics: 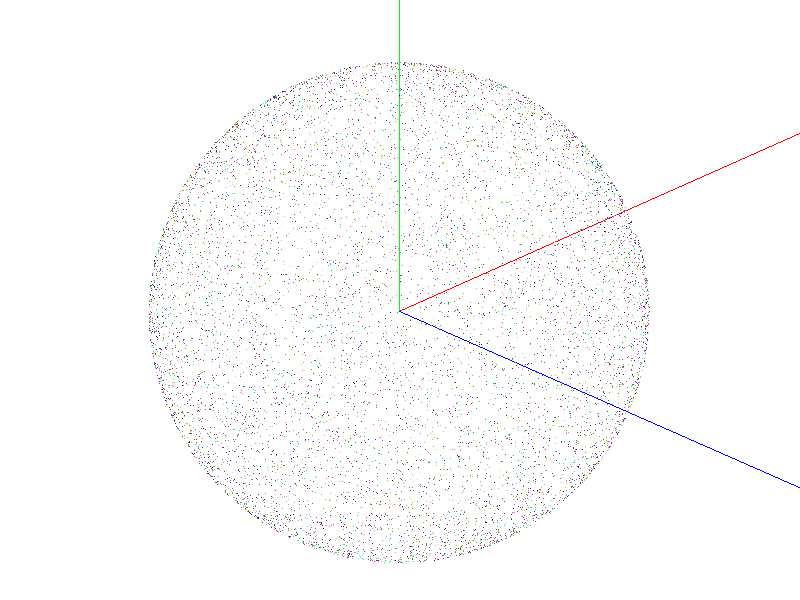 George Marsaglia, in this paper, gives the following proposal:

See the paper for details on how it works.

Not the answer you're looking for? Browse other questions tagged probability geometry random or ask your own question.

2
Return an array of evenly distributed points on a sphere give Radius and Origin.
56
How to generate random points on a sphere?
32
“Random” generation of rotation matrices
32
Generate a random direction within a cone
22
3 random numbers to describe point on a sphere
6
Can this expression be simplified? (double integral over a sphere in $\mathbb{R}^3$.
3
Trying to pick a random point on sphere end up picking from a lune
2
How to test if vectors are equidistributed on the unit sphere
1
Angular probability distribution between 3D vectors?