$\require{AMScd}$If in a regular category a square, whose sides $f,g,h,k$ are regular epis, is cartesian, is it cocartesian too? I would say yes, but I'm not sure that the proof below holds only under the hypothesis in italics; in particular I'm not convinced of the second paragraph. Do you think my (sketch of) proof is ok? Thank you

Looks good to me! You can find a similar argument (albeit a much terser one) in an old answer here.

It seems like your main worry is with the claim that the kernel pair $r_0, r_1$ of $f : a \to b$ really is the pullback of the kernel pair $s_0, s_1$ of $k : c \to d$, so in the interest of providing a slightly less trivial answer, here's another way you might see that:

We meditate on the following commutative cube: 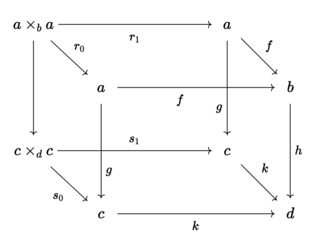 Our task then, is to show that the left and back faces of this cube are pullbacks using the fact that the front, right, top, and bottom faces are all pullbacks. As you might expect, this is a "well known" generalization of the usual pasting lemma for pullbacks. But for completeness, let's prove it here:

A symmetric argument using the front and top faces, followed by the back and bottom faces shows that the back face is a pullback too. 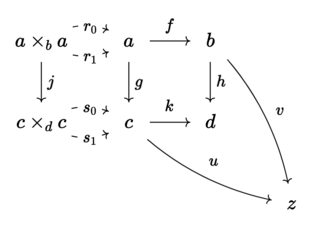 This gives us a unique map $d \to z$ making the diagram commute, which shows that our original square was indeed a pushout.

6
pullback square of regular epimorphisms is a pushout