I have learnt that if a regular, second countable space is normal(Theorem 32.1 of Munkres's Topology), and that a regular, second countable space is metrizable(Urysohn metrization theorem, Theorem 34.1). So, I want to analyize these four properties using a Venn diagram, and I would like to know if the diagram is correct, and examples for each part. 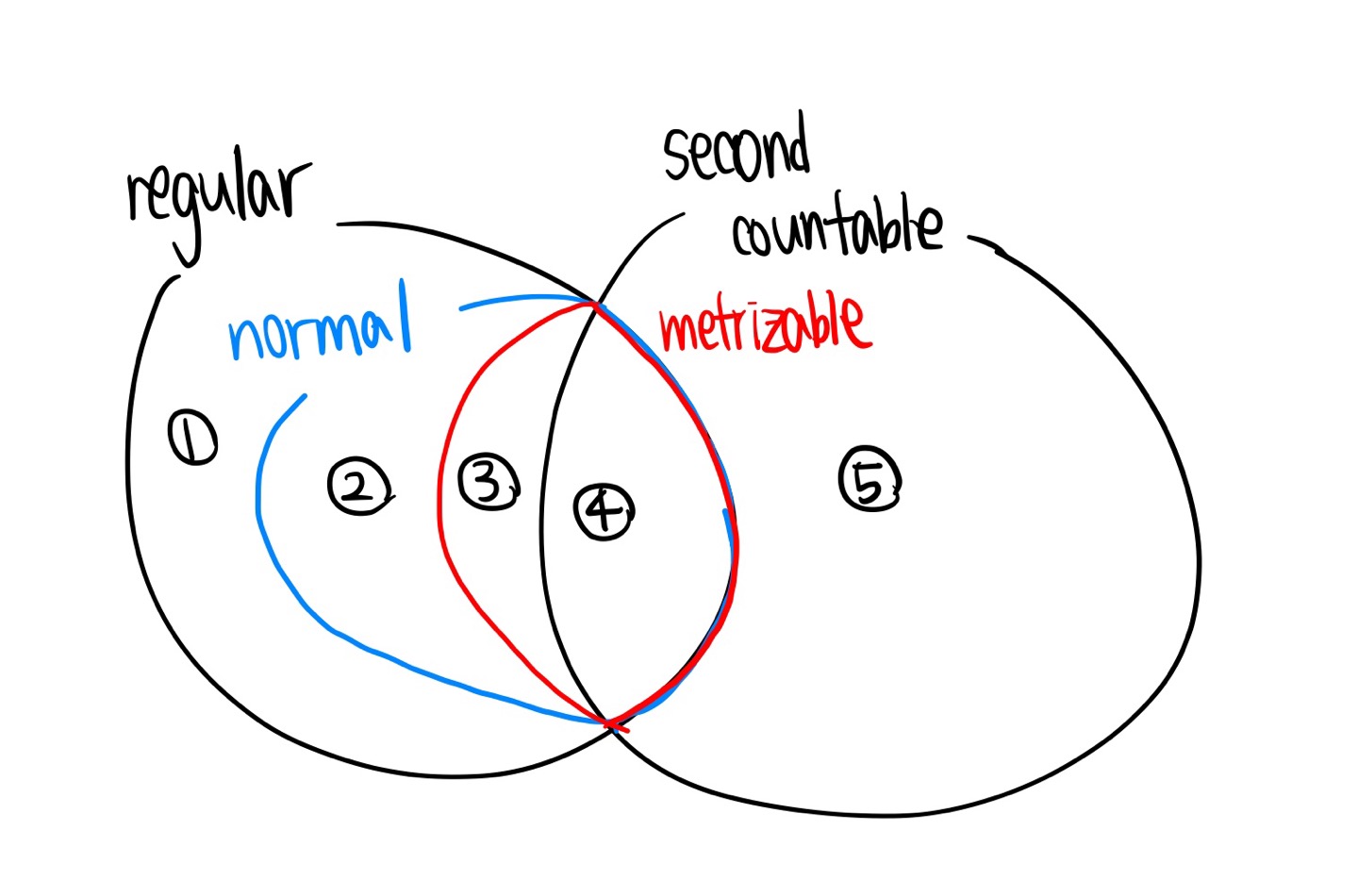 Normality implies regularity, so there is no space that is normal but not regular. Also, metrizable space is always normal. I would like to know some examples each in 1, 2, 3, 4, 5 of the diagram. Here are some of my thoughts:

To expand on Sourav's excellent answer. You missed a crucial point in Uryshon Metrization theorem that the space must be Hausdorff.

1.An uncountable discrete space is metrizable given by the discrete metric. It is regular as given any point $x$ and a closed set $C$. we have $\{x\}$ and $C$ are disjoint open neighbourhoods of $\{x\}$ and $C$. Similarly it is normal as given two closed sets $F,C$ they themselves are open disjoint nbds of itself. Also these are $T_{1}$.

2 .The cofinite topology on $\Bbb{N}$ is not Hausdorff as given two points $x$ and $y$. Then any open set $U$ containing $x$ is of the form $U=\Bbb{N}\setminus F$ where $F$ is some finite subset of natural numbers. Then any open set containing $y$ say $V=\Bbb{N}\setminus C$ where $C$ is some finite set must have non-empty intersection with $U$. This is because $V\cap U= \Bbb{N}\setminus(F\cup C)$ which is infinite (because $F$ and $C$ were finite). In fact you could have worked with any infinite set.

This set is second countable as the set of all finite subsets of a countable set is countable. Hence you can just take $\{N\setminus F\}_{F\subset\Bbb{N}\,,\text{finite}}$ to be a countable basis.

Then $(X, \tau_{discrete}) $ is metrizable (generated by discere metric ), normal , regular but it is not second countable.

Then it is second countable but not metrizable, regular, normal.

8
About Countable Basis
1
scattered line is not metrizable
1
What is a necessary conditions for Urysohn Metrization theorem?
1
Converse of the Urysohn metrization theorem
2
Additional condition for normal space to be metrizable
2
A space is metrisable if and only if it admits a countable basis
0
Measure Space without any form of metric
1
Locally metrizable, completely regular space that is not normal?