Understanding a 'geometrical proof' of irrationality of √2

I had been having trouble understanding a proof of the irrational nature of √2.

I found this proof in the first page of the foreward to 17 theorem provers of the world where a 'geometrical proof' (is that a right term?) of the irrationality of √2 is mentioned (page 2 of the pdf).

Reflect ABC around AC obtaining the congruent copy ADC. On AB position E so that BE = q. Thus AE = p − q. On CD position F so that BF = p. Thus DF = 2q − p. The triangle BF E is congruent to the original triangle ABC. EF is perpendicular to AB, the lines EF and AD are parallel. 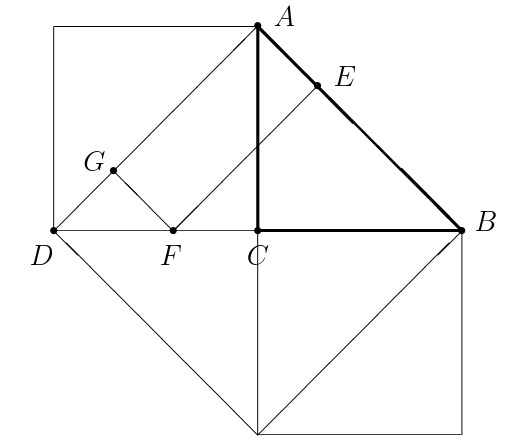 What I understood was, we assume that we have got the smallest possible isosceles right triangle: ABC.

ie, p and q are smallest pair integers for which ABC would be a right isosceles triangle.

Then we derive a smaller isosceles right triangle (DFG) with hypotenuse 2q-p and leg p-q.

Thus, the assumption that ABC was the smallest right isosceles triangle was wrong.

But how can that be used to say that p and q are not commensurable?

(p and q being commensurable means p/q is rational, right?)

My level of math knowledge is very basic.

Could you help me understand this?

This is an example of argument by contradiction. The key idea is to take a fact that you hope to eventually show is false, and instead assume that it is true, but that the assumption of truth leads you to a contradiction.

The classic example of this style of argument is the proof that there's no largest prime; if there was, then that would mean I could make a finite list of all primes, such as $\{2, 3, \dots, p\}$, where $p$ was the largest prime. But if that were true, I would notice that the expression $2 \cdot 3 \cdots p + 1$ would not be divisible by any of my primes -- hence, it must be prime itself, and it's necessarily larger than $p$, which leads me to a contradiction. This implies that my assumption ("there exists a largest prime") must have been incorrect.

If there are integer isosceles right triangles, then by looking at the length of the shorter sides we see that there must be a smallest integer isosceles right triangle (this is an application of the well-ordering principle). But, the argument above shows that we could find a smaller one than the one we had, which contradicts that we had the smallest one.

If $\sqrt 2$ is rational, it can be expressed as $p/q$ where $p,q$ are integers. (Is this what you were missing?) The proof then goes on to construct a rational representation of $\sqrt 2$ with smaller integers in the numerator and denominator. But if this were possible, you could repeat this process indefinitely, which would lead to an infinite sequence of decreasing positive integers -- a contradiction.

Not the answer you're looking for? Browse other questions tagged geometry proof-explanation triangles radicals irrational-numbers or ask your own question.

5
Find 2nd leg of right triangle with known leg and perimeter
4
A challenge geometrical
1
Geometric proof with a isosceles triangle
1
Proof that rectangle triangle is isosceles
1
Right Triangles and a Circle
1
Proof Verification: Show that sides AC = AB
3
Understanding proof why there can only be one triangle for $a^2 + b^2 = c^2$
1
The perimeter of an isosceles triangle $\triangle ABC$
2
Given $\triangle ABC$ isosceles with base AB, M and N the midpoints of the equal sides. Show the reflection of C is the midpoint of AB