Issues with the Fourier Transform of $f(t)=(1-t^2)^4$ on $[-1,\,1]$, should be analytical but looks like having a singularity with noise-like rippling

Issues with the Fourier Transform of $f(t)=(1-t^2)^4$ on $[-1,\,1]$, should be analytical but looks like having a singularity with noise-like rippling

Both which can be seen here: 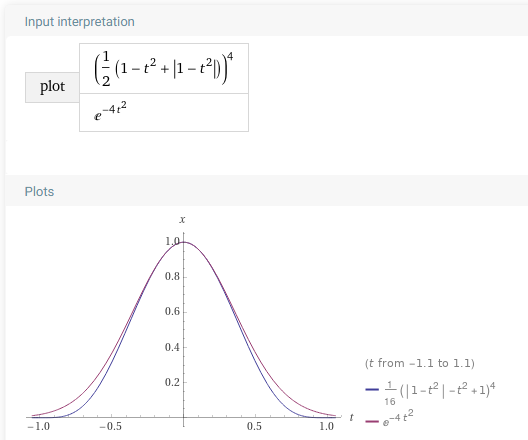 As is shown in the image, at "my taste" the match "looks good", but accurately speaking, it fulfill that:

So with all these point the approximation $f(t)$ look quite "well-behaved": note that is not a "smooth function", but same analysis of point $(4)$ could be done successfully for $f''$ also.

From now on I will continue labeling the observations so you can accurately point where I am having a misconception.

Using Wolfram Alpha I calculate the Fourier Transform (under the "electricians" definition), in 3 different ways showing each of them the same result so I believe is right calculated -way 1, way 2, and way 3:

So far so good, since \eqref{Eq. 4} looks like the classical Fourier Transform made by a polynomial mixed with some trigonometric functions, but when trying to calculate $\|\hat{f}\|_1$ and $\|iw\hat{f}\|_1$ the integrals get stuck on Wolfram-Alpha, so I decide to plot it to see what is going on. 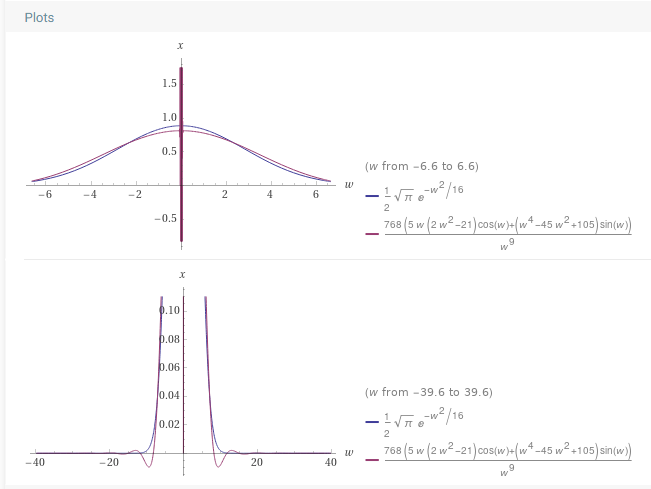 They look similar, but something "weird" is happening near the DC component $w \approx 0$ for the solution $\hat{f}(w)$ of \eqref{Eq. 4}.

To have a better insight I plot $\hat{f}(w)$ also in Desmos and there exist an "horrible noise-like rippling" that also "looks" to be diverging as a singularity! 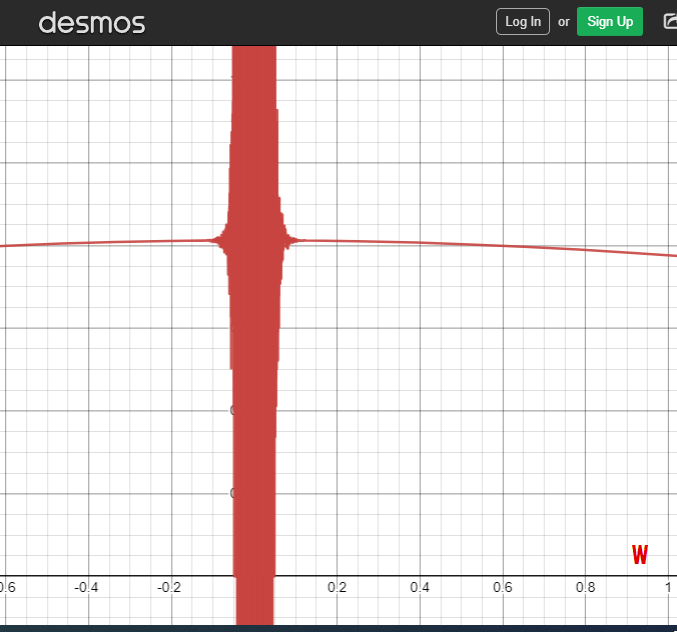 I tried to find the value of $\|\hat{f}\|_\infty$ with Wolfram-Aplha but I believe are numerical errors since the value change when changing the domain limits, but are numbers of the order of $10^{93}$!!!.

So the main questions are:

Q2: If right, Why is this "rippling" happening? It is right? or is a miscalculation of the graphic software? or a numerical issue? Actually its looks like "Brownian" or "White Noise".

Q4: Is this rippling a known result like the "Gibbs' Phenomenon? How is called? If it is a known phenomenon I would like to search for any references - maybe the is a way to avoid it.

Q5: Where I am misleading my analysis? (since this singularity shouldn't exists under my assumptions and my actual knowledge - which is quite basic by the way)

After seeing this video about the absorption of light, temporal dispersion, and Kramers-Kronig relations, required for the complex-valued modeling of the refraction index to preserve causality (is quite a good video, simple and short), I see why dispersion must happen or other way the absorbed frequency will lead to a "time-wide" signal which will become non-causal in the analysis (it will be entering the absorptive medium before the frequency-component subtraction had happen on the first place). But since a Gaussian Envelope is used, the "causality-issue" where already present since this function only vanishes at infinity, but since spectra decays faster than $1/|w|$, the Kramers-Kronig relation still holds "hidding" this issue.

This is why I was trying to find another envelope but with an accurate compact-support, since it is multiplied by a trigonometric function it Fourier Transform is only a displaced version of the Transform of the Envelope function, and here is where I found the "problem" since the approximation I take has this "issue" in the spectrum - don't knowing now if its a "real-life issue" or just a numeric problem of the calculation algorithms.

Hope you find it has interesting I am, beforehand thanks you very much.

I have noted now another interesting thing:

And following Wolfram-Alpha its Fourier Transform is:

and suddenly the problem is gone... it is kind of ridiculous that "just" for the exact numbers the problem happen. 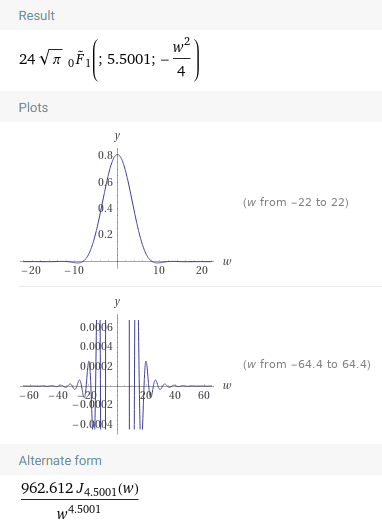 Unfortunately, I wasn't able to find $\|\hat{f}\|_1$ under any of these approximations (both shown on the last image), "as it where diverging" (I don't know if this is the case), even when $\|\hat{g}\|_1=2\pi << \infty$, which is counter-intuitive for me giving its similarity (the lobes should be adding even less area than a Gaussian in principle), but comparing their graphs shows that the compact-support function has lobes much more spread than the Gaussian, as is shown here. 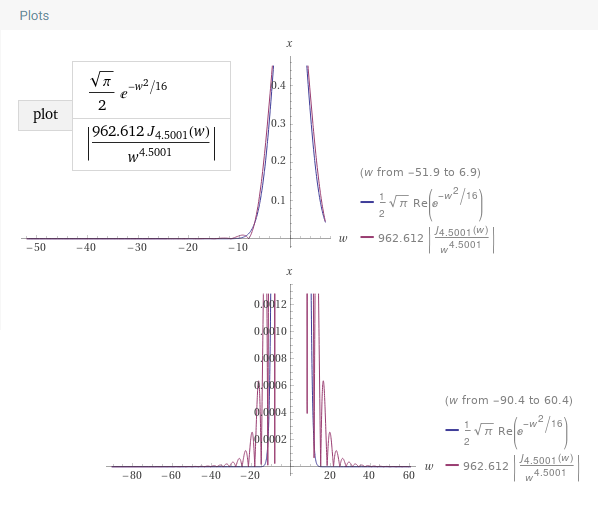 But nevertheless, the tails are decreasing faster than $|\frac{1}{w^2}|$ so I don´t know why the result is not finite (see here). 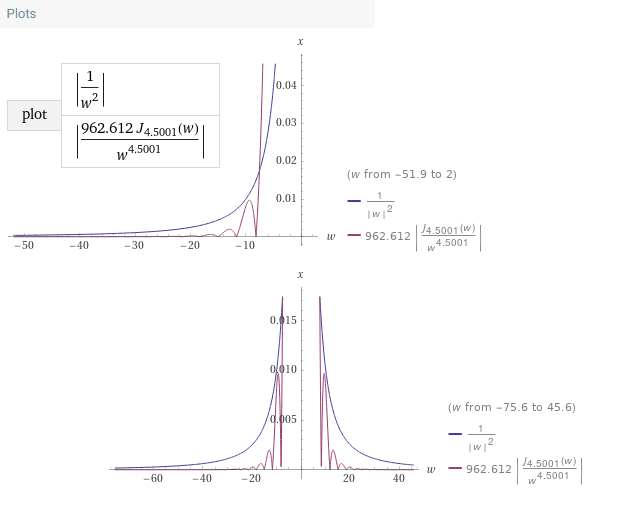 Computation by hand of the Fourier transform

Verifying the behaviour near $0$

Of course, using more terms will give a more impressive bound, but this is enough to rule out the spiky behavior you saw.

You have to zoom in quite far in order to even notice that they don't exactly match at $x=0.2$: 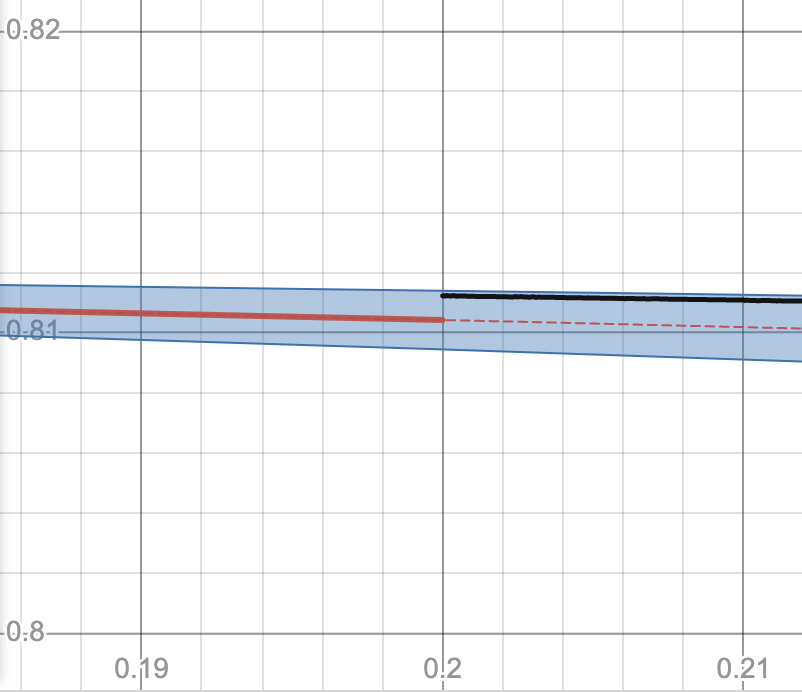 Your $\hat f$ is correct. The graphing programs are not able to give accurate graphs of that $\hat f$ function near $x=0$, at least not from that formula.

The most common form of representing real numbers in computer languages is floating-point arithmetic, where a possible value is an integer times a power of two. The double type lets the integer part use up to 52 bits, so relative errors from operations like multiplication tend to be a few times $2^{-52}$ in magnitude relative to the value. But when addition or subtraction should result in a number much closer to zero, many of the higher-order bits cancel out, and a small proportion of the value bits could be accurate.

We can see similar errors asking Wolfram to plot

If I convert your $\hat f$ to its Taylor expansion

Wolfram still gets the same bumpy graph, possibly by doing symbolic analysis to get back to the sines and cosines. (Take off the word "plot" from the input, and it shows the equivalent formula in terms of sine and cosine, then the same plots again. So at least this tells me I got the series right.)

But then if I limit that Taylor sum to a finite number of terms like $k \leq 20$, instead of asking for the infinite sum, Wolfram can give a more accurate plot, which is indeed smooth near zero. With terms up to $w^{36}$, that should be plenty of accuracy enough as long as $|w|$ isn't huge, and of course a Taylor expansion is at its most accurate near zero.

5
Confusion with the Fourier Transform and Complex Differentiability: example with compact-supported function