Question regarding calculus, graph of functions, point of inflection.

We're studying the application of derivatives in mathematics right now.
This refers to a question which arose in my head while solving a particular problem. The problem was: 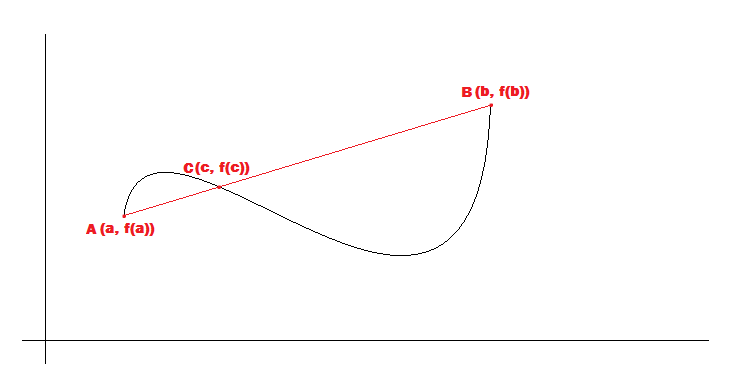 Now this part is easy enough.
There will exist a point in the interval $(a,c)$ such that the slope of the tangent at the point will be equal to the slope of the line segment $AB$. Similarly, another point with the same condition will exist in the interval $(c,b)$.
We know that the concavity of a graph changes between two extremas (for a continuous and differentiable curve), and therefore there will exist a point of inflection $\big(t, f(t)\big)$ around which the second derivative $\frac{d^2y}{dx^2}$ $\big(= f''(x)\big) $ changes its sign and thus the value of $f''(t)$ will be $0$.

Now my confusion starts. A student raised a doubt, saying that although there HAS to be a point $t$ such that $f''(t) = 0$ it is possible that there is no point of inflection. He said that this may happen when there is a 'm'-shaped graph: 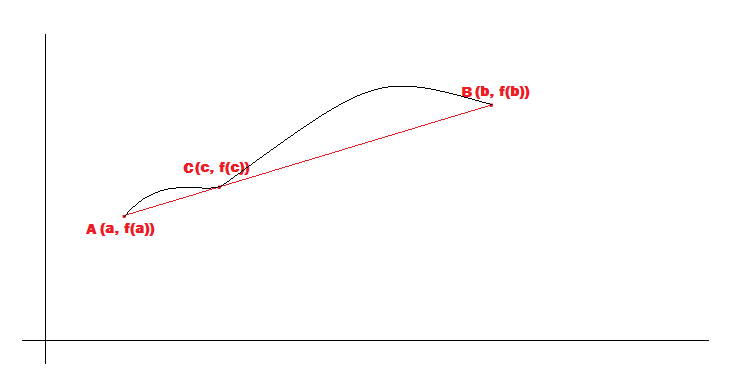 To my surprise, my professor accepted the argument!

I felt that it could not be true, since there ARE existing points between A and C and between C and B where the concavity IS changing!
The portion of the graph just about C is concave upwards, while the other parts of the graph are concave downwards.

When I pointed this out to the professor, he disagreed, saying that if the graph narrows to a point at C, then there won't be any portion facing upwards.

I have a problem with this too.

I'm not going to meet this professor for another week, and I need this cleared. Can anybody confirm whether I am correct or my professor is?

There are many pieces to this question that you've asked, so let's answer them in turn.

Firstly, your reasoning about your question is very good. I'm going to reference it, so allow me to go through the argument once more.

Proof: If $f$ is a line, then we are done since every point on $f$ has zero second derivative (Remark: but no inflection points).

Otherwise, the derivative of $f$ will be nonconstant. This means that the second derivative will be either or positive or negative somewhere. As you show, the second derivative will actually be both positive somewhere and negative somewhere. Since $f$ is twice-differentiable, $f'$ exists and is continuous. By the extreme value theorem, $f'$ will have a max or a min in the interval $[a,b]$. And since we know $f'$ is not always increasing/decreasing, there will be a $t \in (a,b)$ where $f'(t)$ is a max or a min (and therefore an inflection point of the graph of $f$). $\diamondsuit$

This is a slight reparsing of your proof, but it's solid. I think one good thing to clarify with your professor is what you mean by concavity. I'm going to assume that you define concave up and down along these lines:

Note that these definitions rely most fundamentally on a well-behaved first derivative, since tangents are properties from the first derivative. Since our first derivative exists and is continuous, we can expect nice and reasonable behavior from concavity.

If these agree with your definitions, then it's easy to see why the M-graph above cannot have no change of concavity if its first derivative is continuous. Since the first derivative exists, we can talk about tangents at all points of $x$. And since it's continuous, there can be no jumps in the slope of the tangents. In your proof, you used the mean value theorem to find a point $a' \in (a,c)$ where the slope was the same as the slope of the initial line. For ease of argument, let's suppose there is exactly one such point (i.e. I don't want to worry about many oscillations right now, but it all works), and that $f$ is above the line in $(a,c)$, for ease of description.

Even in non-simplified cases, this style of argument (looking at the behavior of tangents to $f$ as they intersect and go above/below the line segment) shows that there will always be concavity changes. But behind the works we are using that they behave reasonably - if we don't know that $f'$ is continuous, then all bets are off.

Finally, $f(x) = \sin^2 x$ has many points of inflection. I'm going to guess that either your professor accidentally misspoke or had something else in mind (happens to me in front of my classes all the time).

Not the answer you're looking for? Browse other questions tagged calculus derivatives graphing-functions or ask your own question.