What are some good, elementary and maybe also interesting proofs by induction?

I am hosting a one-time class/talk on the concept of infinity for some (talented) high-school students. I want to teach them about proof by induction and I want them to do some exercises (you learn math by doing!). I am therefore looking for easy, elementary and maybe also intersting exercises for someone with little to no experience in proving statements. Some examples that came to mind:

I have looked at the thread Examples of mathematical induction but most if not all of the examples given here I think are too difficult for the audience.

Any inputs are welcome and appreciated! The result and its' induction proof need not be 100% rigorous, the point is to illustrate the induction proof in simple settings.

My favorite Induction proofs were always the more "real life" proofs. For example, here's one I have always been a fan of-

And here's another one-

First: I still think you can scrape some fairly simple examples/proofs by induction from that thread that you are linking, e.g tiling with trominoes or Towers of Hanoi. So carefully go through that list and there really are some suitable ones that are not too difficult

If you're doing mix of weak and strong induction, here are some of my favorites: 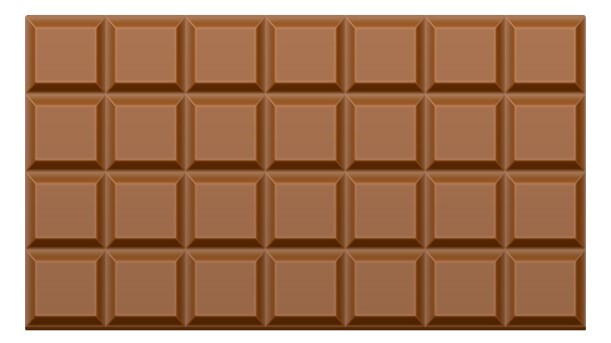 You can first give this problem to your audience, and kind of play with them by suggesting that first making a break in the middle of the bar to get two somewhat evenly sized chunks might be a more efficient strategy than breaking off one column at a time and breaking that into little pieces one by one, since with larger chunks you can cover more individual breaklines with a single break than with smaller chunks ... But of course it doesn't matter how you do it: it will always take $n-1$ breaks to get $n$ pieces, since each break will only increase the number of chunks by one. And that insight really requires no induction, but you can use strong induction to really drive this home: first break will divide bar with $n$ pieces into a chunk with $m$ pieces and a chunk with $n-m$ pieces. By inductive assumption, the first will take $m-1$ to completely break apart, and the second takes $n-m-1$ breaks, for a total of $1 + (m-1) + (n-m-1) = n-1$ breaks.

If you are looking for some more traditional algebraic weak mathematical induction ones: there is of course the sum of all numbers $1$ through $n$ ... but I would start with the algebraically somewhat simpler sum of the first $n$ odd numbers ... though both of those results have some nice proofs by picture as well which doesn't require any induction at all. Can you tell I like visuals? :P

When I first studied Proof by induction in highschool, the very simple but interesting proof of $\sum_{i=1}^ni = \frac{n(n+1)}{2}$ was presented to me. I thought this to be very intuitive and quite straightforward. I believe this is quite well suited for your audience.

A few problems I often use when teaching induction:

This result impacts the factorization of $2$ into prime ideals in quadratic domains, and therefore the class field of said domains. It also makes binary representation a relatively good "filter" for identifying squares, for we end up with five-sixth of terminal-bit patterns never corresponding to squares. Other prime bases do little better than one-half.

you can prove, by induction, Legendre's theorem on the highest power of a prime $p$ that divides $n!$ for some $n \geq p.$ I answered with that, once, let me go look

Understanding the proof of a formula for $p^e\Vert n!$

Not the answer you're looking for? Browse other questions tagged induction examples-counterexamples or ask your own question.

7
Mathematical Induction: how do we know what applies to one thing also applies to another?
25
Illustrative examples of a phenomenon in the logic of mathematical induction
4
What is a good example to show high school students why a proof for induction is a reasonable kind of proof?
37
Examples where it is easier to prove more than less
21
Concrete examples and computations in differential geometry
0
Examples of Induction over Sets Lacking Natural Well-Orderings?
4
What are some good examples of _Proof by Mutual Induction_?
3
Proof verification that $t(n+1)=t(n) + \pi$ using mathematical induction