Can the lion protect the sheep from three wolves?

Generally, in pursuit-evasion games, there's one prey and one or many pursuers. I'd like to know how extending the food chain would change the dynamics of such games.

Specifically, let's consider a closed, circular shape arena in $\mathbb{R}^2$. Three wolves are uniformly distributed at the border. The sheep and his lion friend are at the center. 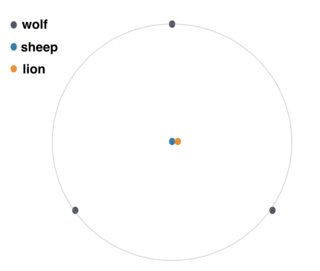 If $d(w(t),s(t))=0$, the wolf eats the sheep, if $d(l(t),w(t))=0$, the lion eats the wolf, where w(t), s(t) and l(t) are the trajectories of the animals, and $d$ measures euclidean distance. The pack of wolves work as a group, their goal being to eat the sheep. The goal of the lion-sheep team is to prevent the sheep from being eaten, indefinitely. All animals move continuously in time at equal speed and are intelligent.

This is a puzzle I originally asked here on puzzling.stackexchange. I know already that

See here for the proof of those claims. I'm interested in knowing whether $N-2$ or less lions can fend off $N$ wolves.

4
Maximize the Area of a Quadrilateral given Three Sides
4
The Lion and the Man Puzzle - Can the Man Escape, Or Is the Proof I Read Incorrect?
17
Understanding the solution of a riddle about lions and sheep.
7
Can eight circles be constructed from three circles?
6
The Three-Cornered Duel
1
Optimising profit from a three way bet
0
Points equidistant from three lines .