What percentage of a population that has survived one standard deviation will survive two?

This is a problem I had in school that I think I remember how to solve except my son does not agree with me.

Given a population with a life expectancy that fits a normal distribution, mean of 75 and a standard deviation of 5. What percentage of the people that live to age 80 will live to age 85?

As soon as I'll figure out how to produce suitable graphics to answer the question but I'll post it now in case anybody can come up with a good explanation.

If the random variable $X$ represents the age at which a randomly selected person died, you want to compute $P(X>\mu+2\sigma | X > \mu+\sigma)$ where $X$ follows a normal distribution of parameters $\mu=75$ and $\sigma=5$.

By definition of conditional probability, we have

The way I remember this as being presented by my teacher in Probability and Statistics class is:

The explanation part, First, The area under the curve shows the probability of an event. If we say that everybody dies with an age greater than

Next, 50% of people die before they reach the mean value and 50% die after. (Since that is the definition of the median (which matches the mean for a normal distribution), again, not very profound.)

Where this gets interesting is when we want to see for specific values.

We all remember that 68% or so of the population dies within one standard deviation of the mean. We can see this, if I go into Excel and type the magic formula:

or 68%. When arg4 is true, we get the cumulative value from 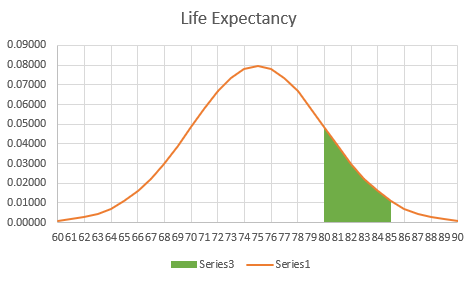 If we want to know what percentage of people that reach age 80 will reach age 85, we can take as 100% the area under the curve from 80 to

. The population that lived to age 85 is represented by the nonshaded area under the curve from 85 to