Klein bottle immersion in 3 space with gaps - why

I watched this video https://youtu.be/q8Umr0BLMiU?t=143 which shows a glass Kleinbottle where the self-intersecting part is "cut out". The professor says that this is a valid immersion into 3 space.

I understand that if we take a 4d Kleinbottle and take an intersection with 3 space, then pieces can go missing. In the shown example, the cut-out portion is where the handle takes a detour through the 4th dimension to avoid self-intersecting the body of the bottle and therefore is no longer visible in that specific 3 space.

However, I understand that an immersion is not an intersection. It's an injective mapping and so I would assume that all points of the surface of the Kleinbottle in 4-space would definitely be mapped to some point in 3-space (potentially multiple times to the same point in 3-space).

In 3 space, parts could become obscured but since the Kleinbottle is made of glass, there is no reason for parts to actually go missing completely.

Where did I go wrong in my thinking?

I saw the video and squirmed a bit when he kept saying that these cut-out bottles were "immersions" of the Klein bottle. As you say, an immersion of the Klein bottle $K$ is a certain kind of map $K \to \mathbb R^3$ that, in technical terms, has an injective derivative map at all points. The important thing though is that an immersion is indeed a map, so every point of $K$ should have an image in $\mathbb R^3$.

One way in which you could interpret these glass models as indicating immersions is to think of them as knotted surface diagrams. If you're familiar with knot theory, you'll recognize pictures like this that we call knot diagrams: 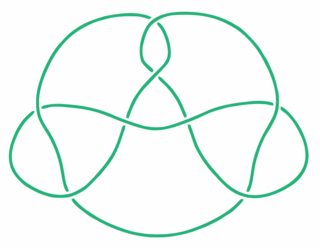 This diagram is supposed to represent a knot, which is a map from the circle $S^1$ to $\mathbb R^3$. In particular, a knot is connected. But this diagram is not connected, it has all of those breaking points! The problem is that the knot cannot be projected to the 2-dimensional image without intersecting itself. Rather than letting the curve intersect itself, we retain some information about how the knot was embedded in space by choosing which strand to break at each crossing point. This tells you which strand went "over" and which went "under". The diagram can then be used to reconstruct the full, 3-dimensional knot.

You can play out the same story one dimension up. Surfaces can be put into 4-dimensional space in interesting, knotted ways. When you project to 3-space, the surface may end up intersecting itself several times. You can break the surface at these crossings so as to avoid self-intersections, and your choice of which branch of the surface to cut gives you the information about what was going on up in 4-dimensions. Carter and Saito develop the theory in their book "Knotted Surfaces and Their Diagrams". Here's a figure from the book. Look familiar? 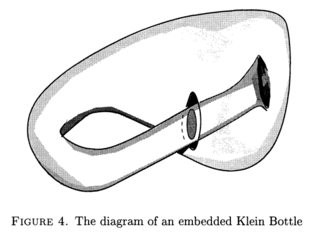