However, I was wondering if this another algorithm I thought of would work (and with the same complexity of $O(|V|)$

My reason was the longest path of the graph has to contain the edge with the heaviest weighting. Is that a correct assumption? Also, the algorithm is still of complexity $O(|V|)$ since step 1. is $O(|V|)$, step 2 for DFS on $a$ is $O(|V|)$ and DFS on $b$ is $O(|V|)$. That probably isn't so efficient compared to the standard algorithm but it should adhere to the said requirements I guess?

Your assumption is false, this is a counterexample: 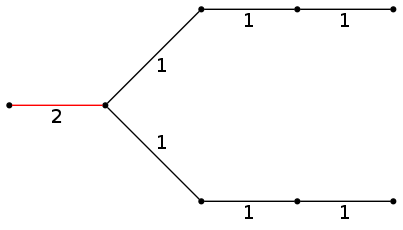 Check, that the longest path (all black edges) has weight $6$, while any path containg the red edge has at most weight $5$.