In a certain sense, can "Piecewise Linear" be Interpreted as "Non-Linear"?

I was looking at the following function (called "ReLU") : 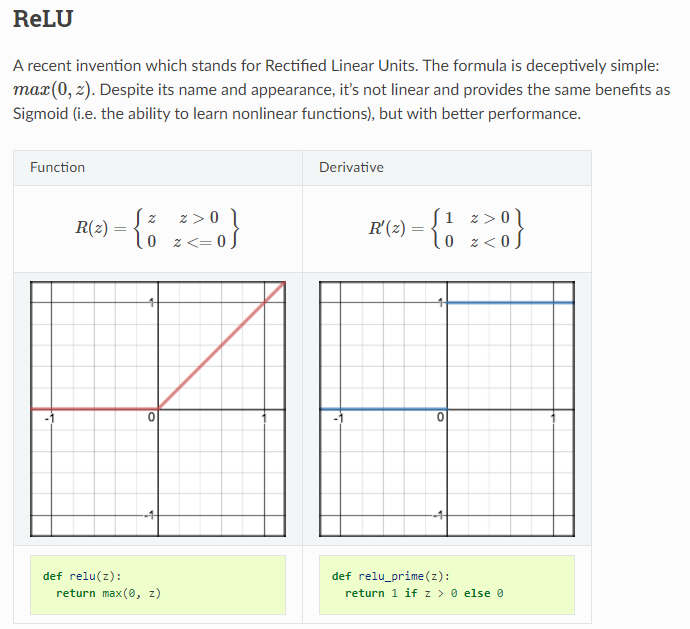 I am trying to understand why this function ("ReLU") is considered to be non-linear, when it appears to look "piecewise linear" (and even contains the term "linear" in its name):

There are two competing definitions for a linear function $f:\Bbb R\mapsto\Bbb R$, but neither of them would allow ReLU.

The first definition most are exposed to is that a linear function is polynomial of degree 1, i.e. a function in the form

(as Brian Borchers points out in the comments, this type of function is usually called affine beyond elementary algebra to avoid conflict with the second definition below)

The second definition comes from linear algebra, and is a restriction on this class of functions. We say a function is linear iff

for all such functions.

So, to directly answer your question, "piecewise linear" should not be interpreted as "nonlinear" in general, but there are piecewise linear functions which are nonlinear (and those which are linear).

As with linearity, we can discuss convexity in both global and piecewise contexts.

A function is called convex on some domain when every pair of points $x,y$ in that domain has

Linear functions (in both senses) are convex, and so piecewise linear implies piecewise convex. Thus, ReLU is (at least) piecewise convex. However, we can directly verify that ReLU is globally convex as well by substituting the definition into the above inequality.

Not the answer you're looking for? Browse other questions tagged functions derivatives convex-analysis machine-learning or ask your own question.

9
Minimize the number of points in a piecewise linear approximation
2
When a Piece-wise convex function is convex?
0
Can we tell if ANY Function is Convex or Non-Convex?
1
Can we Take the Derivative of a Function over a Non-Convex Set?
5
How can the Loss Functions of Neural Networks be Non-Convex?