An artist needs help from mathematicians! Angles of reflections: should I paint these distant trees in the water's reflections? 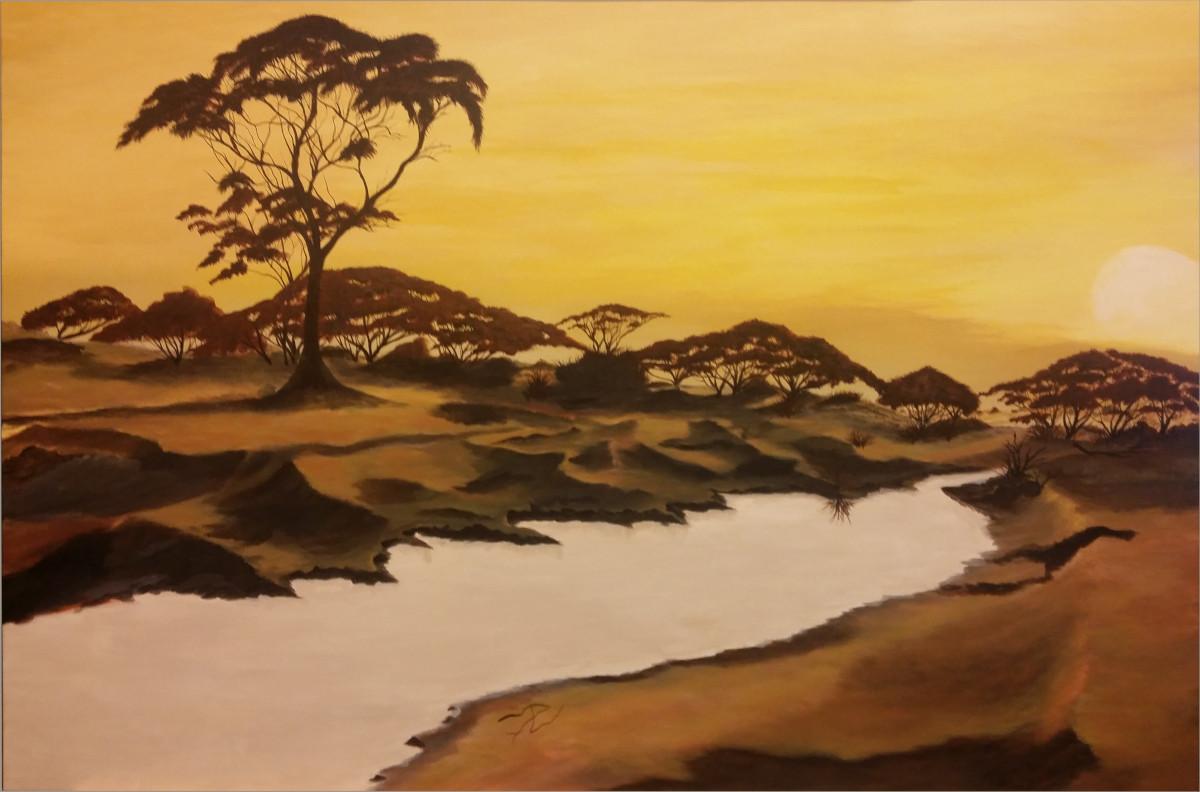 But, I find myself wondering if I would see the reflections in the little pond I'm getting ready to paint.

Now some of them seem obvious, the shore line maybe. The little clump of grass I added as a simple test seems right. But what about the distant bigger trees? I assume that some assumptions need to be made on distances and heights. Heights of the observer etc.

I'm not even sure what math I'm missing.

Please feel free to add your own dimensions if necessary to help in answering my question. I would think that it's more of a ratio issue rather than discrete sizes.

This is almost a "What's my question?" question. But I'm sure it's a MATH question!

I love you guys and thank you!

In a simple mathematical model, the surface of the pond is a plane $P$; the viewer's eye is a point $E$ "above" $P$. A point $S$ in the scene is visible to $E$ as a reflection in the pond if the following conditions are met: 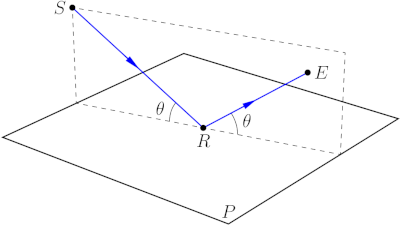 The angle in the diagram is exaggerated for clarity, and it varies for different points in the scene. It may help to imagine yourself being at a point on the surface of the water looking up at angle $\theta$ toward the tall tree; do you see the top of the tree, or just the bank?

Imagine that the surface of the water is part of a large flat mirror that extends through the earth and up to the horizon.

For each object you want to reflect, such as the large tree in the foreground, decide how high the base of it is above the level of the water, and imagine where the level of the mirror would be if it was underneath it.

Then the object is reflected in that mirror.

The basic reasoning in Andrew's answer is what you'd get for a perfect mirror. There are a few more physical effects which may be worth thinking about to get it just right.

One is that water is much less reflective to light coming straight down at it than to light coming at a shallow angle. If, for example, you are looking down at it at an angle of 20 degrees from the horizontal, it reflects less than 15 percent of the light. This means that your reflection should be dimmer than what it's reflecting.

A second effect which may make a bit of a difference, things which are further away look smaller. If you really did all of Andrew's maths for each point on the tree, this would happen anyway. But as a shortcut rule of thumb, if there's a significant difference between the length directly to the tree and the length down to the water and back up to the tree, your reflected tree would be appropriately that much smaller.

The last two minor effects I'd mention are that water is not perfectly flat (so ripples distort reflections) and that water is transparent at steep angles (so close to the viewer where they're looking down, any reflection would be merged with whatever is in or under the water. (the last effect may just be a blurry brownness though, because of silt as much as because of optics.)

For all of these, I'd suggest that you go with whatever looks right in the art, but it's worth knowing what to expect to look for.

Not the answer you're looking for? Browse other questions tagged angle reflection or ask your own question.

0
How can I place points at equal angles on a range starting from 0 and not repeating if the range is 360?
1
Can we reconstruct a subspace from its angles to the coordinate axes?