There is a famous example of a function that has no derivative: the Weierstrass function:

But just by looking at this equation - I can't seem to understand why exactly the Weierstrass Function does not have a derivative?

I tried looking at a few articles online (e.g. https://www.quora.com/Why-isnt-the-Weierstrass-function-differentiable), but I still can't seem to understand what prevents this function from having a derivative?

For a finite value of $n$, is the Weierstrass function differentiable?

Nothing is preventing us from taking the derivative of any finite partial sum of this series. This is a trigonometric polynomial and it has derivatives of all orders.

And once again, this fact alone isn’t enough to show that the function is nowhere differentiable. To show that, you have to roll up your sleeves and work out inequalities that apply everywhere and prevent the limit above from existing. This is done carefully here, for example.

Let's look at the convergence at a few select points, arbitrarily chosen

We see it fairly rapidly converges to the asymptotic values. Taking these same points, let's look at the convergence of the first derivative, $f'_m(x)$. I'm going to plot the absolute value so you can see what's going on (note the logarithmic scale on the vertical axis)

Clearly the partial sums of the first derivatives do not converge! In fact they diverge exponentially fast.

In order to calculate the derivative of a function at a given point (e.g. $x=0$), you just need to keep zooming on this point until the curve gets smooth:

The issue is that the function has the nature of a fractal, at every zoom level it continues have sharp changes in direction. So yes, at any finite level you can take a derivative at most points, because a finite level doesn't have the infinite zoom that prevents a local derivative from existing.

Remember, the derivative is a local existence of a limit, $f(x)$ is differentiable at $a$ if for some small neighborhood around $a$,

stays close to a value. But this function will obtain all different kinds of slopes in any tiny neighborhood...you just have to zoom in far enough to see the jagged behavior.

While others have given answers saying that a pointwise limit of differentiable functions needn’t be differentiable, here is a simple example explaining why that is true.
One can find a limit of smooth functions which converge to the absolute value function which is not differentiable at $0$, as shown by the following image: 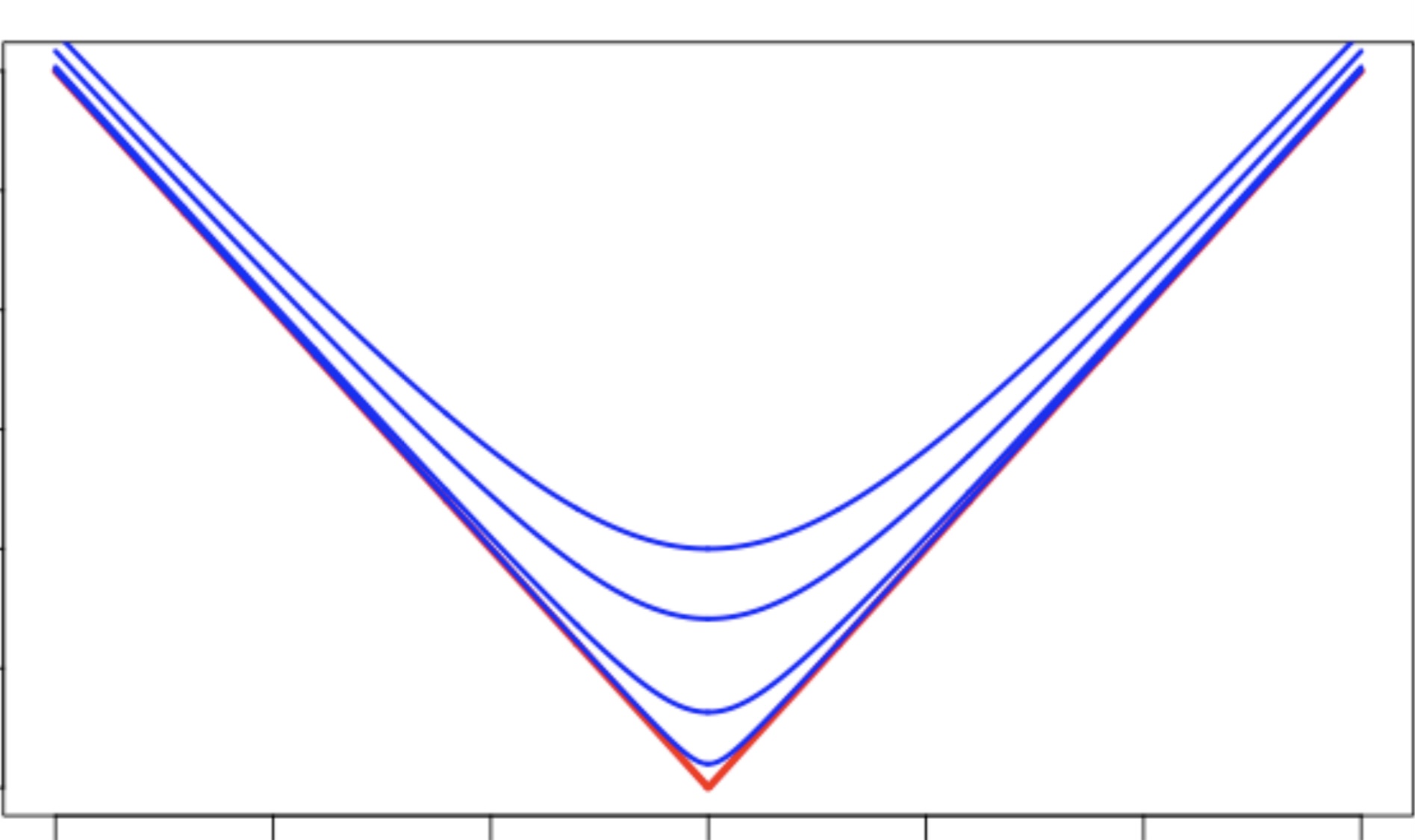 The value of an infinite series is defined to be the limit of the values of its partial sums: $$ \sum_{n=0}^\infty f(n) = \lim_{N \rightarrow \infty} \sum_{n=0}^N f(n) \text{.} $$ so the right thing to do when trying to understand the convergence of the given series and its termwise derivative is to look at what the partial sums do as we add more and more terms.

Before we go to pictures, let's take a second to see what is already present. In $W_N$, the coefficient of the trig function is $(1/2)^n$. Since $0 < a < 1$, successive powers of $a$ get smaller -- successive cosines mix in with smaller and smaller amplitudes. Every time we increment $N$, the new term is dwarfed by each preceding term, so it's plausible that the function given by the sequence of partial sums settles into some limit function by making smaller and smaller adjustments as we add more terms.

However, the coefficients of the sines in $W_N'$, $(13/2)^n\pi $, are increasing faster than the powers of $\left(1 + \frac{3}{2}\pi\right) = 5.7123{\dots}$. This means each new sinusoid has amplitude at least 5-times larger (in fact, $13/2$-times larger) than the preceding one -- every time we increment $N$, the new term dwarfs the sum of all the preceding terms. This means the $W_N'$ do not settle in towards some function; instead oscillating with rapidly greater amplitude and frequency, failing to settle toward a limit. 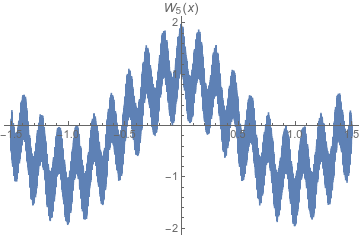 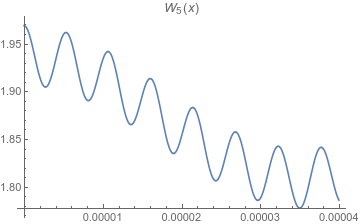 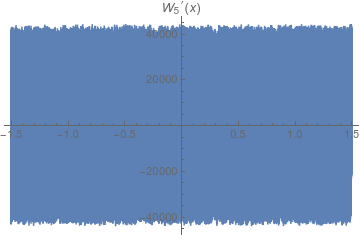 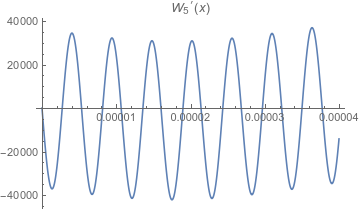 We see that the narrow wiggles caused by the fifth term in the series are producing derivatives that flail from $-40\,000$ to $40\,000$ everywhere, with tiny variations from the previous terms.

Let's get the same four pictures for six terms. 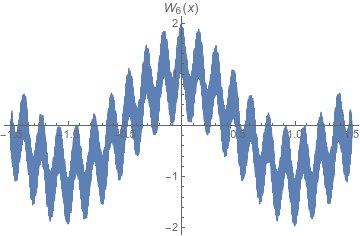 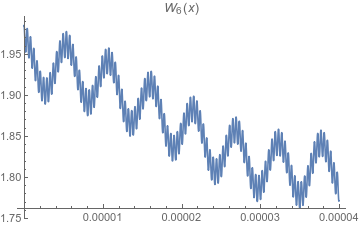 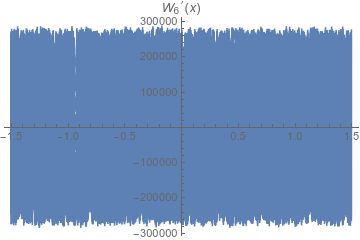 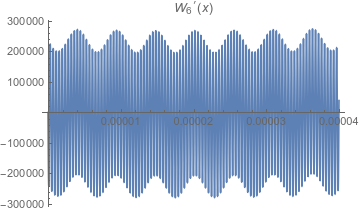 And the pattern continues as we take more terms -- $W_N$ approaches a continuous function and $W_N'$ tries harder and harder to make its graph go through every point on the plane.

The basic concept used in constructing the Weierstrass function is that when you have $\sum r^n$, this converges for $|r|<1$ and diverges for $|r|\ge1$. So if you can get a function that involves $\sum r^n$ with $|r|<1$, and whose derivative increases $|r|$ above $1$, then the derivative will diverge.

8
Why is a derivative defined using limits?