Why is the line connecting the identity point and another point vertical in an elliptic curve?

Addition of 2 points on an elliptic curve is described as follows: 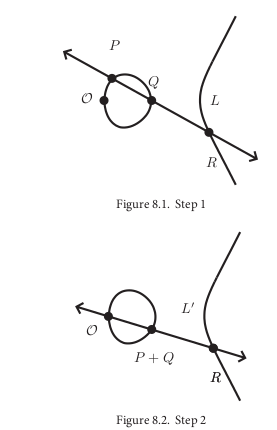 The book describes the algebraic process of adding together 2 points on an elliptic curve.

The line connecting $O$ and $R$ is $L'$ doesn't seem to be vertical. Clearly, in the picture it's slanted downwards.

Does anyone know what's going on?

Going back to the original Cartesian line, we see that its equation must be $ax+c=0$: vertical.

The construction and diagrams you're quoting are in Section 8.1 of the book.

In Section 8.2, the author changes the definition of $\mathcal O$ to $(0:1:0)$, i.e. the point at infinity in the vertical direction. In this new context, $L'$ becomes a vertical line.

This group theoretic construction in 8.1 works for nonsingular cubic curves in general where $\mathcal O$ can be any point on the curve. Elliptic curves are a special case of these curves, and always pass through (0:1:0). This simplifies the construction somewhat, in that the final stage is a simple reflection across the x-axis, rather than the intersection of the curve and a line.

Not the answer you're looking for? Browse other questions tagged elliptic-curves projective-geometry or ask your own question.