This is the Theorem 5.68 of Rotman's "An introduction to Homological Algebra". I found this theorem while studying sheaves. This is the theorem: 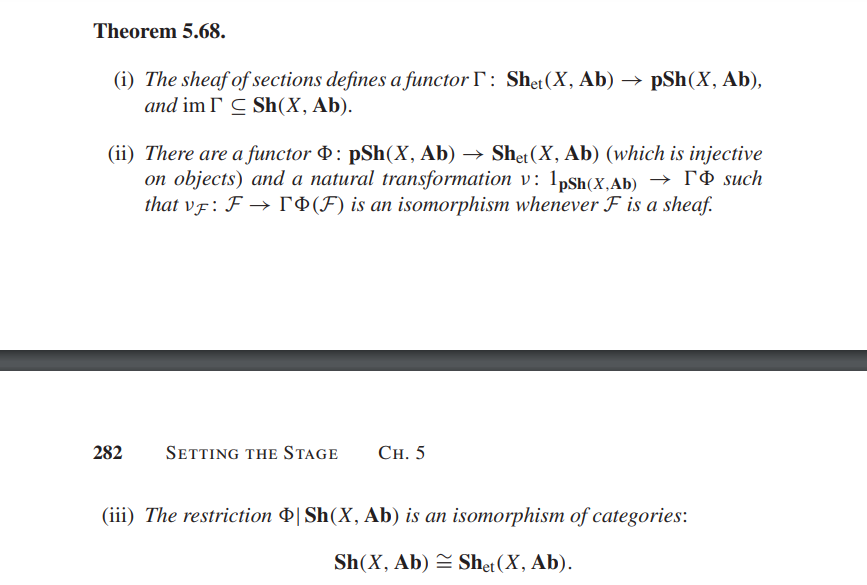 My question is more about category theory and functors than about sheaves. We have a fixed topological space and we consider the categories of presheaves, sheaves and etale-sheaves over this topological space. In the second point of the theorem, is given a functor $\Phi$ which is, in some way, "the inverse" of the functor defined by the sheaf of section $\Gamma$. Here again, we see in brackets this functor is INJECTIVE on objects. In the third point we see the restriction of this functor $\Phi$ to the subcategory of sheaves is an isomorhpism of categories between sheaves and etale-sheaves.

I can't understand how a functor can be at the same time injective on objects and its restriction to a subcategory be an isomorphism. For sure this doesn't work for a classical injective function.

I hope I explained myself. Thank you in advance to those who can answer me.

Browse other questions tagged algebraic-topology category-theory sheaf-theory or ask your own question.

4
Is a presheaf which is a direct summand of a sheaf necessarily a sheaf?
3
Obtaining a morphism of sheaves from a morphism of presheaves
6
'Categorical' definition of surjective presheaf morphism vs. the usual one
17
Introduction to sheaves using categorical approach
1
Defining Presheaves on Categories
0
Equivalence of categories of open sets and sheaves.
2
Does Exactness in Presheaves Imply Exactness in Sheaves?