Why $f(x) = x^2$ has variable derivative but its tangent has constant slope?

I'm taking Brilliant.org's calculus course, and I'm on the section called The Derivative.

A tangent line is a linear function that grazes a point, $a$, on the graph of a different function. The slope of that tangent line is the instantaneous rate of change at $a$. The way you find this is by taking the difference ratio, giving you the slope, and plugging in equal values for the input points. So, for the function $f(x) = x^2$, the slope would be:

Now, considering the case as the difference between $b$ and $a$ gets smaller, or equivalently, as the secant line's two points become one and the same point, thus turning it to a tangent line:

Thus, the derivative of the square function is found, $f'(x) = 2x$. The slope of the tangent is $2x$, but apparently, the derivative isn't the slope of the tangent, it is only so the other way around (see this Math.SE answer). I could define any number of functions of the form $g(x) = ax$, which would be tangent to or intersect the function $f(x)=x^2$, when $x=a$. For any of these functions, $g'(x) = a$, as per the difference ratio. The slopes of these functions would be any arbitrary number $a$, not $2x$. So, it seems we're dealing with the slope of one particular tangent. However, I can't see how this tangent line is linear. If it is linear, its slope is a constant, but $2x$ contains a variable.

All of this leads me to think that we're talking about the tangent line in a very different sense than the one of "a linear line that grazes the function's graph". But I've only been made familiar with the latter sense, and this mysterious sense is very ill-defined in my head. What is it and what does it have to do with tangent lines? The trick with morphing a secant line into a tangent line doesn't really explain this, because one can do that anywhere on the graph and wind up with tangent lines that have differing slopes, none of which are equal to $2x$.

I agree that $f(x) = x^2$ has a lot of tangent lines. In fact, for each point on its graph, there is a tangent line. Let's plot a few of them 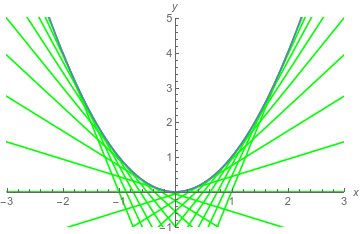 and then pick one out. 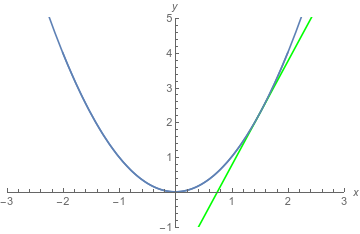 There are several ways to express an equation of a line. One way is point-slope form, $$ y - y_0 = m(x - x_0) \text{,} $$ where $(x_0,y_0)$ is a point on the line and $m$ is the slope of the line. Point-slope form is convenient for tangent lines because we can use the function to get a point on the graph and the derivative to get the slope of the line tangent to that point of the graph.

So, what can we do? For any choice of $x$, we can use the function to get a point on the graph and use the derivative of that function to get the slope of the tangent line to the graph at that point. The first graph (reproduced here)

has the graph of $y = f(x)$ in blue. Pick one of the green lines: it meets the blue curve at one point and is parallel to the curve at that point. Each green line is a line, none of these are not lines. Two things change as we pick different points on the graph: the coordinates of the point and the slope of the line through that point. This means that the derivative has to be a function: for each point on the graph, we need a slope of the line tangent to that point. The function you obtained was $f'(x) = 2x$. And we can see this: for the green lines tangent to the left half of the curve, the slopes are negative because when $x$ is negative, so is $2x$. On the right half, the slopes are positive. Near $x =0$, $x$ is small, $2x$ is small, and the slopes are near zero (meaning close to horizontal). As we run off to the left or right (allowing $x$ to have large magnitude) the slopes become steeper in both directions.

So, yes, the derivative is a function -- it has to be able to tell you about different slopes of lines at different points on the graph of the function. If you draw all the tangent lines, you get a lot of tangent lines. 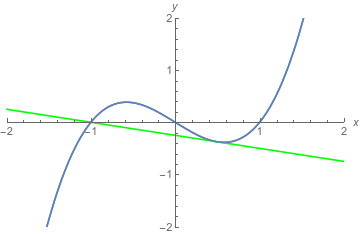 $f'(x)$ represents the slope of a tangent line of a function $f(x)$ at a particular point $x$. Regarded as its own function of $x$, $f'(x)$ need not be constant or linear, i.e. the slope of the tangent line can vary nonlinearly in $x$.

It looks like you're misinterpreting what the derivative is. I'll explain this the way I would have if I was teaching calculus this year.

When we have functions, we may sometimes wish to see how the dependent variable changes. This change can be approximated by secant lines, but we may want to know how quickly a quantity changes at a single point. Think about looking at a speedometer at one moment in time.

which approaches $2x_0$ as $x \to x_0$. This is limit, a fundamental concept you must examine before beginning differentiation.

The derivative is the slope of the tangent line, and itself may not be a linear function. Consider the classic example - let $g(x) = e^x,$ and so $g'(x) = e^x$. Certainly the slope function is nonlinear, but that doesn't matter. The derivative $g'$ gives us how quickly the function changes at a specific point.

I commonly refer to the derivative as the "slope function," since it tells us slope at a particular point. The tangent line is a line, yes, but its slope is determined by the derivative at a point.

I was conflating the function of the tangent line with the tangent line's slope. This is made evident when I said I didn't understand how $2x$ could be the slope of every tangent line grazing $x$ on the curve $f(x) = x^2$, since $2x\neq 3^2$ as an example. However, the tangent line's function, $t(x) \neq 2x$; this is instead true for it's slope, $t'(x) = 2x$. This was obvious, probably too obvious for you guys to spot as my issue, but it slipped past me and caused all this confusion. Thanks for the help.

Not the answer you're looking for? Browse other questions tagged calculus derivatives terminology tangent-line slope or ask your own question.

1
Is it correct to teach the derivative as the slope of the tangent line?