Better Proofs Than Rudin's For The Inverse And Implicit Function Theorems

I am finding Rudin's proofs of these theorems very non-intuitive and difficult to recall. I can understand and follow both as I work through them, but if you were to ask me a week later to prove one or the other, I couldn't do it.

The implicit function theorem proof, while not as bad, also requires one to construct a new function without ever hinting as to what the motivation is.

I searched the previous questions on this site and haven't found this addressed, so I figured I'd ask. I did finnd this proof to have a much more intuitive approach to the inverse function theorem, but would like to see what proofs are preferred by others.

Suppose you want to find the inverse of the mapping $F: \mathbb{R}^n \rightarrow \mathbb{R}^n$ near a point $x_o$ where $F'(x_o)$ is invertible. The derivative (Jacobian matrix) provides an approximate form for the map $F(x) = F(x_o)+F'(x_o)(x-x_o)+\eta$. If you set $y = F(x)$ and ignore the error term $\eta$ then solving for $x$ gives us the first approximation to the inverse mapping. $$ x = x_o+[F'(x_o)]^{-1}(y-F(x_o)). $$ Then, you iterate. The technical details are merely to insure this iteration does indeed converge to the inverse mapping, but at the start, it's just using the derivative to linearize the problem.

I don't know if this helps or not, but really the approach is almost brute force, to invert $F(x)=y$ what do you do? You solve for $x$. We can't do that abstractly for $F$ so instead we solve the next best thing, the linearization. Then the beauty of the contraction mapping technique completes the argument. 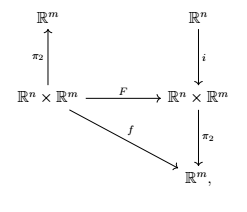 where $F(x,y)=\big(x,f(x,y)\big)$. By the Inverse Function Theorem, it follows that locally we have 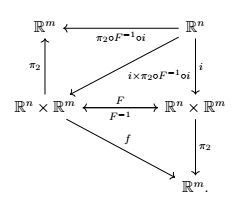 Due to how $F$ is defined, the commutativity of the diagram above is obvious. Due to how $F$ is defined and due to the fact that it is invertible in the given neighbourhood, the existence of $g$ is clear, and $g=\pi_2 \circ F^{-1} \circ i$ is also clear. Since $g=\pi_2 \circ F^{-1} \circ i$, $g$ is $C^1$. The rest of the Implicit Function Theorem follows by using the composition of the diagonal arrows.

As to why take the function $F$ as is, just note that the proof is basically finding a function $F$ making everything commute. The choice of $F$ is the natural one (actually, practically imposed one) to make that happen.

I first studied the proof of the inverse function theorem over 20 years ago, and it seemed opaque. But now I finally understand the proof well enough that it seems clear and almost straightforward.

I like the presentation of Spivak's proof that is given in Jerry Shurman's excellent book "Calculus and Analysis in Euclidean Space". I'll attempt to explain the proof here in a way that provides intuition and emphasizes the key ideas.

Comment: The fundamental strategy of calculus is to take a nonlinear function $f$ (difficult) and approximate it locally by a linear function (easy). In more detail, we have $$ \tag{1} f(x) \approx f(a) + f'(a)(x - a) $$ and the approximation is good when $x$ is near $a$. Since the function $L(x) = f(a) + f'(a)(x - a)$ is invertible, it seems quite plausible that $f$ should also be invertible on some sufficiently small neighborhood of $a$.

Terence Tao refers to the approximation (1) as "Newton's approximation". I'll use this name for it also. It is essentially the definition of $f'(a)$.

Proof: I'll start by proving the theorem in the special case where $f'(a) = I$, the $n \times n$ identity matrix. Later, the general theorem will be an easy corollary of this special case.

Exercise 1: Make the above argument rigorous by keeping track of the error terms when using Newton's approximation. (Hint: You will use the "mean value inequality" at the crucial moment.)

The inequality (2) will continue to be helpful in step 2 and step 3 below.

Comment: If you're familiar with least squares and nonlinear least squares, which are ubiquitous topics in applied math, then introducing this function $L$ feels quite natural. After spending many years doing applied math and solving optimization problems like this, I returned to the proof of the inverse function theorem and realized how comfortable I now feel with the function (3). For example, computing the derivative of $L$ using the chain rule is an effortless one-line calculation.

This completes the proof of the inverse function theorem.

Appendix 1: Solutions to the exercises

Not the answer you're looking for? Browse other questions tagged real-analysis analysis reference-request or ask your own question.