How to statistically describe this set?

Imagine I want to statistically characterise a set of converging points and still get an idea of the converging properties or shape of such set, for example 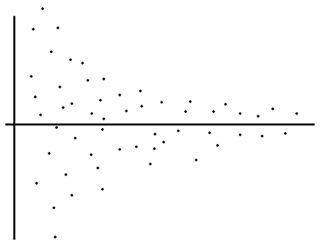 The values of the mean or variance of the $y$ coordinates don't really tell me anything specific about the converging shape of such set and I wouldn't be able to, just by looking at such values, distinguish the previous set from something like 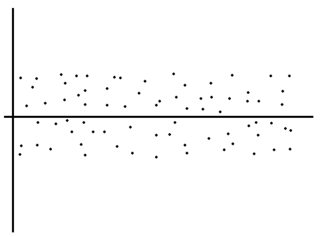 I could, however, artificially build something depending on the $x$ coordinates (the variance, for example). Naturally, in the first set, for points where $x>L$, we expect the variance of the $y$ coordinates to decrease as $L$ increases, but this seems too much, so I was wondering if there is a neater way of statistically characterising such sets and being able to distinguish both previous sets. Any ideas?

Browse other questions tagged statistics variance means descriptive-statistics or ask your own question.

2
Is this a place to use Variance, if so what is the meaning of the value?
2
Combinatorics in ML: Counting Points with co-ordinates from among a set.
1
Contradiction in calculation of barycenter of points with random weight
0
Is there a way to bound expected value with limited information of the CDF?
1
evaluating 'equalness' of matrices. What function to use?
1
I am trying to "scale" one set of data to another set based on minimum, maximum, and means of the latter set.
1
How to interpret when A>C is statistically significant in t-test, but neither A>B nor B>C is statistically significant?