Physical application of vectors on a pulley system question 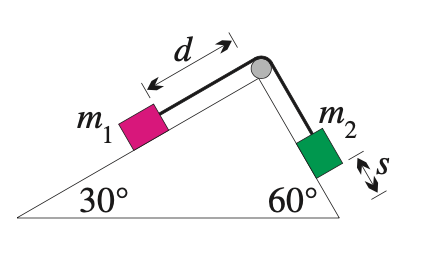 In the image above, objects of mass $m_1$ and $m_2$ are held together on adjoining smooth inclined planes of $30$ and $60$ degree where $d$ is the distance of $m_1$ from the smooth pulley. They are connected by a light inextensible string so there is no tension force.

As the string is inextensible and remains taut, tension with the same magnitude $T$ is also pulling back on $m_2$, and it is also being accelerated by magnitude $a$ (otherwise the string would sag, stretch or break).

We can therefore state:

Adding the two to eliminate $T$, we get:

and this is the equation we are going to use for the rest of the solution.

When the distance travelled by $m_1$ along the ramp is $d$,

Substitute that into the equation for the magnitude of the velocity to get:

But, honestly, part b) is most simply handled by Conservation of Energy. The total mechanical energy of the two mass-string system remains constant because it is being acted on purely by a conservative force field (gravity). There are no dissipative forces like friction (smooth ramp).

Solve for $v$ and you'll arrive at the same result, and far more simply and elegantly.

Not the answer you're looking for? Browse other questions tagged vectors classical-mechanics or ask your own question.

1
Mechanics Question: Where's my mistake?
1
Mechanics - Friction
1
Find lagrangian of a very specific model with two masses
0
How do I find the angular acceleration of a pulley when there one object is hanging from it?
0
Equilibrium from hanging weight and horizontal force
0
How to find the acceleration of a cart sliding over a wire?
1
Find the reaction of the table
1
Simple Statics Force diagram problem using moments.