On which tangent bundles of $\mathbb R^2$ does position, velocity, acceleration live?

I am studying differential geometry, and am unable to align what I have learnt in classical mechanics with how differential geometers describe the situation. Consider a particle travelling in a circle. We draw its position, its velocity, and its acceleration all on the same plane, and are given by the equations: 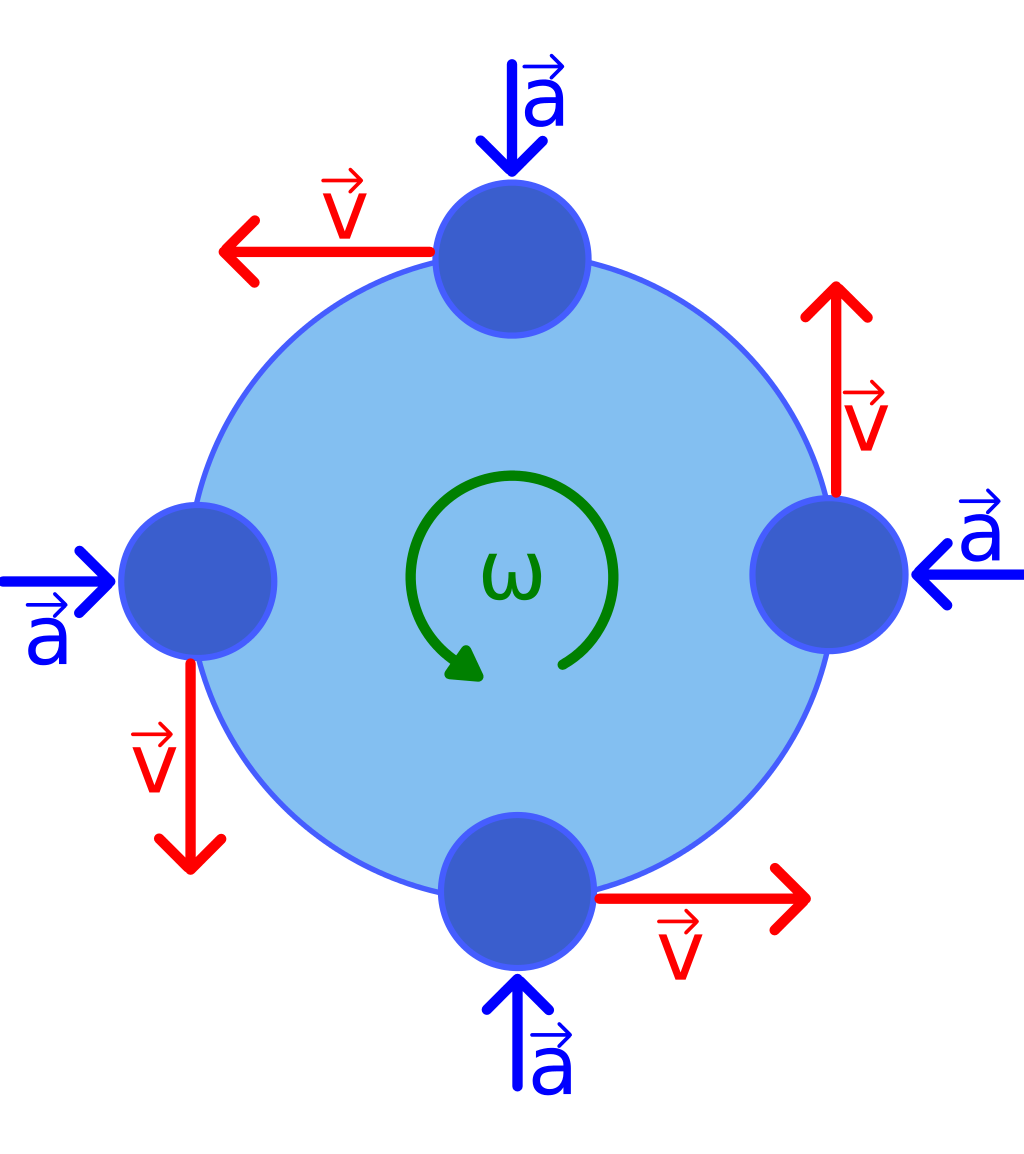 However, at least in the physics picture, there is a "natural" identification between $M$, $TM$, and $T^2M$, since I can "draw" the velocity and acceleration next to each other, and even take the dot product between velocity and acceleration! So where am I missing the link between classical mechanics and differential geometry? In particular, I'd like to understand:

Rather, the acceleration we have in mind comes from Riemannian geometry. We equip $M$ with a Riemannian metric, and equip $TM$ with the Levi-Civita connection. With this connection, we can take covariant derivatives to get $\frac{D\gamma'}{dt}\equiv \nabla_{\gamma'}\gamma':I\to TM$, and this is once again a smooth vector field along $\gamma$.

So, position is $p=\gamma:I\to M$ while velocity is $v=\gamma':I\to TM$ and acceleration (in the manifold $M$) is $a=\frac{D\gamma'}{dt}:I\to TM$. We can look at the higher derivative (I believe it's called "jerk") $j=\frac{D^2\gamma'}{dt^2}=\frac{Da}{dt}:I\to TM$ and so on. This is the nice thing about covariant derivatives: our target space always stays the same; and geometrically it also has a nice interpretation in terms of the parallel-transport defined by the connection.

Linking the Abstractness to the Pictures:

Note that one can never truly identify the tangent bundle with the base manifold; the dimensions just don't match up. So, what's going on with the pictures? Suppose $M$ is an embedded submanifold of $\Bbb{R}^n$. Then, for any point $x\in M$, we have $T_xM\subset T_x\Bbb{R}^n$, and we have a standard isomorphism $\Phi:T_x\Bbb{R}^n\to \Bbb{R}^n$ (this isomorphism is obtained by virtue of the identity chart). The precise definition of this isomorphism depends of course on the precise definition of tangent spaces you're working with. But in any case, the way to think of this is as "a copy of $\Bbb{R}^n$ attached to the point $x$". So, if we want to heuristically draw a vector in $T_xM$, we draw an arrow emanating from the point $x\in M$, and we draw it "tangent to $M$".

The picture which you posted is thus doing two things simultaneously. We have one copy of $\Bbb{R}^2$, which we think of as $M$. Here, we're thinking of $\Bbb{R}^2$ as a manifold; this is where the blue curve lives. Next, we come to the red arrows. Notice how the red arrows are emanating from points on the curve; this is keeping track of the base-point of the vector. The arrow keeps track of the vector aspect; refer to the previous paragraph about $T_x\Bbb{R}^2\cong \Bbb{R}^2$. This time we think of $\Bbb{R}^2$ as a vector space. So, really it's like there are several copies of $\Bbb{R}^2$ lying around. The first and primary one is $M=\Bbb{R}^2$, the base manifold. Next is for each $x\in M=\Bbb{R}^2$, we have the tangent space $T_x\Bbb{R}^2\cong \Bbb{R}^2$, which we think of as the vector space "attached to the point $x$", and so that's where all our arrows emanate from. Of course, since everything was just $\Bbb{R}^2$, we are able to condense all of these subtleties into a single picture.

Covariant derivatives take maps (with values in a vector bundle) and differentiate somehow to still give us something in that same vector bundle (unlike the usual tangent mapping, which requires us to look at a bigger target manifold). This is part of why we like it so much. Also, covariant derivatives allow us to "differentiate along maps". This is very important for us, because going back to your picture, we wish to be able to differentiate vector fields (or more generally tensor fields, or maps into vector bundles) defined along the particle's trajectory.

The usual descriptions of connections and covariant derivatives proceeds rather algebraically (using the Koszul definition for a connection). While this algebraic method is very slick and efficient, I never understood the basic "geometry" in "Riemannian geometry".

Instead, I find that thinking of connections as a specification of Horizontal vectors (i.e Ehresmann's definition) is much more intuitive (more abstract yes, but the idea is simple enough); see the picture at the bottom of this question of mine. So, the connection $C$ specifies horizontal vectors. Now, coming to the part about how to differentiate along maps. Suppose $(E,\pi, M)$ is a vector bundle with a linear connection $C$, and suppose $N$ is a smooth manifold, $f:N\to M$ a smooth map, and $\phi:N\to E$ a smooth lifting of $f$ (this just means $\pi\circ \phi=f$, i.e that for each $x\in N$, $\phi(x)$ is an element of the fiber $E_{f(x)}$, so this generalizes the notion of a vector field along a map).

If you open up a book in Riemannian geometry and look at the coordinate formulas, you'll see that the covariant derivative of vector field is given by first taking partial derivatives of components of the vector field and then correcting by an additional term involving $\Gamma^i_{jk}$. These Christoffel symbols are part of the chart-representative of the connection map $C$, and they offer a "correction term" which classically people describe as saying that it gives rise to the correct transformation law. Well, now geometrically, you can see this as taking the usual tangent mapping $T\phi$, and then subtracting off the excessive horizontal part. Once we subtract, we're only left with the vertical part, i.e something tangent to the fibers, and hence can be identified with an element of the fiber.

Another Subtlety Regarding the Definition of Acceleration:

Suppose we have a Riemannian manifold $M$ and an embedded Riemannian submanifold $N\subset M$ (meaning if $\iota:N\to M$ is the inclusion and $g_M$ is the RIemannian metric of $M$, then $g_N:= \iota^*g_M$). Suppose we have a smooth curve $\gamma:I\to N$. Then, the velocity is $\gamma':I\to TN\subset TM$. When we talk about "what's the acceleration of the curve $\gamma$", this is really an ambiguous question. We should really specify the manifold with respect to which we wish to calculate the acceleration. i.e if $\nabla^M$ and $\nabla^N$ are the Levi-Civita connections on $TM$ and $TN$, then we have to decide whether we calculate $\frac{D^N\gamma'}{dt}=\nabla^N_{\gamma'}\gamma'$ by thinking of $\gamma':I\to TN$, or whether we calculate $\frac{D^M\gamma'}{dt}=\nabla^M_{\gamma'}\gamma'$ by thinking of the velocity as $\gamma':I\to TM$, mapping into the larger tangent bundle.

Not the answer you're looking for? Browse other questions tagged differential-geometry curves classical-mechanics or ask your own question.

23
What does the integral of position with respect to time mean?
6
Defining Connection in Hom Vector Bundle without Coordinates, using Dieudonne's Definition
0
Local representation and christoffel symbols

0
Mechanics: Newtons Second Law
1
How to solve mechanics problem when acceleration depends on position.
3
Question regarding Energy Conservation
1
Angle between position and velocity vectors is constant?
1
Figuring out velocity,acceleration, work of a particle given that we know its position vector.
2
Let $M$ be a $n$-dim manifold. If $f : M \to \mathbb{R}$ then does $\ker(df_p) = T_p(f^{-1}(c))$ for some $c \in f[M]$
0
Are the velocity and acceleration vector perpendicular at points of zero curvature
3
Find the equation for the angle in which the particle abandons the hemicircle. No friction.