Is the solution to picture on the left correct? [closed]

I know that h and h'' have to be one of those curves due to the concavity of f(x) at f''(x). However I am having difficulty understanding how am I supposed to know what is h and what is h''.

I think h and h'' should be switched in picure on the left. Or is the solution correct? 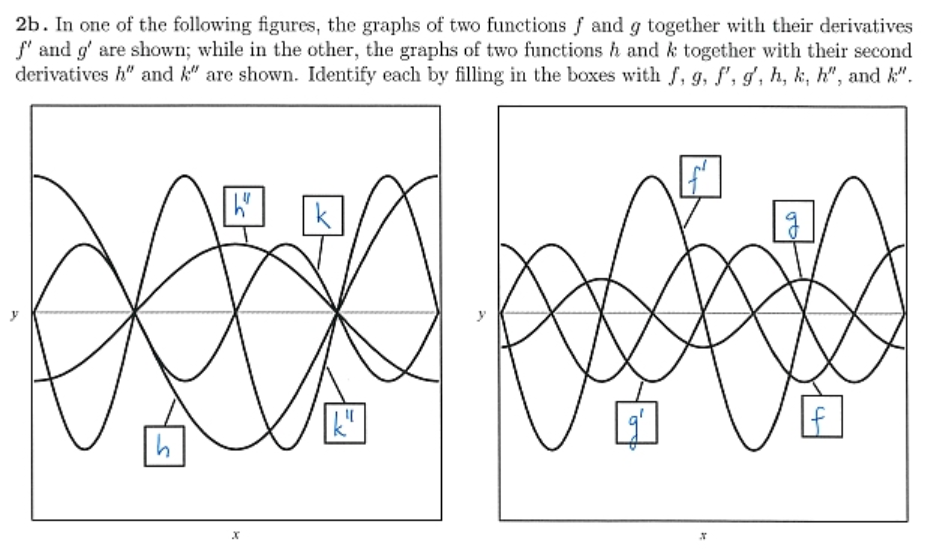 As already noted in the comments, without scale marks on the coordinate axes, it is actually impossible to tell.

Notice how the second derivative has amplitude less than the original function.

10
Proving double derivatives with the chain rule (I think?)
0
Finding the Equation of a Line Using Horizontal Tangents and Derivatives
0
Find particular solution to nonhomogeneous DE $y'+y=x^2+\sin{x}+\cos{x}$
1
Tangent line at point P
4
Why does differentiating $-\frac{2}{x+1}$ or $\frac{2x}{x+1}$ result in the same function $\frac{2}{(x+1)^2}$?
0
Naive turning point question
2
Why is it necessary to take the 2nd derivative to determine concavity?