I have created a $3$-dimensional visualization of the Central Limit Theorem in Mathematica...

However, when flipped upside down, from below it looks suspiciously like light being emitted from a flashlight...

Common sense might suggest to write this off as a coincidence. However, I recently stumbled across a link between probability distribution and physical behavior in this video on the heat equation and this video on the Fokker-Planck equation. I was kind of surprised by this, because probability distributions are abstract, mathematical concepts, while heat evolution and gas diffusion exist in the physical world.

This is not maybe a full answer, but it could be and interesting start for answer your questions.

For example, in the case of laser light, a first order laser beam have a profile very similar to a Gaussian function, and actually there is a full theory of laser beam propagation using Gaussian beams approximation, which success can be explained in two ways:

For the question related with the general physics phenomena, I believe it would depends more in which phenomena are you seeing, since the probability explanation given by the second law of thermodynamics is related, but very different from its genesis, from quantum mechanics, as example.

From the quantum nature I will no talk because I quite ignorant, but there are different sources of "randomness" that will guide how it is going to look your physics model and how to include it or not: maybe are random effects because there are variables you don´t know, maybe because of random noise in your measurements, maybe there is a chaotic deterministic phenomenon driving the noise where knowing "everything" will become it deterministic but since is impossible it looks random to you (chaotic dynamics have initial conditions defined in the phase diagram by fractals so there is no way to physically guess them), or even knowing "everything" about the problem as if you were God is not enough because the phenomenon is random in its very nature like in Quantum Physics (God part is an exaggeration, but a good intuition about how weird it is hahaha).

But from the classical physics perspective, I believe something interesting related to your question can be seen, for example, in the Galton Boards toys: here, many balls are let fall through tiny pins where chaotic crashes split the balls in different paths, but the random ordering of the balls in the bins were they lands after these tiny pins, always resembles the Gaussian shape. This is a classical example for the law of big numbers, but I believe is better explained by the second law of Thermodynamics and Information Theory by the following: assuming that the variance of processes is finite (or equivalently, have finite mean and power), the distribution which maximizes the entropy of the process is the Gaussian Distribution, so said in an intuitive way, the Gaussian shape is indicating that the information that each ball is carrying about the path it have takes for ending in each specific bin have been totally lost during it fall.

These maximum entropy principle is very general, so many physical processes shows its effects.

Hope it helps you to think of answers to the other specific questions you made.

This is not a complete answer, but too long for a comment.

The second picture is a result of two very simple facts. Firstly, the "center" of your beam is the expectation of the distribution in question, i.e. $x = y/2$, a straight line. Secondly, the "width" of the beam is proportional to standard deviation of this distribution, i.e. $\sqrt{y}/2$ (it you look closely, the beam does not resemble a straight angle, but rather a parabola).

You will observe a similar behavior with any (nice) distribution (family) whose mean and variance are proportional to its parameter. For example, here is a Poisson beam: 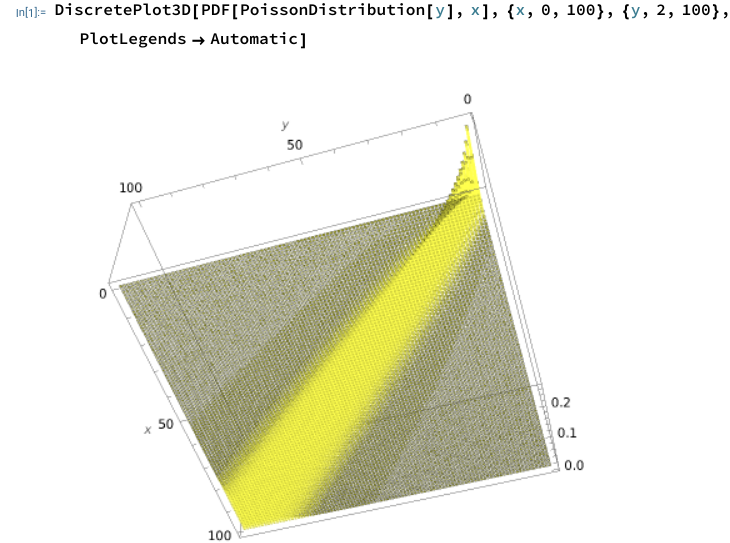 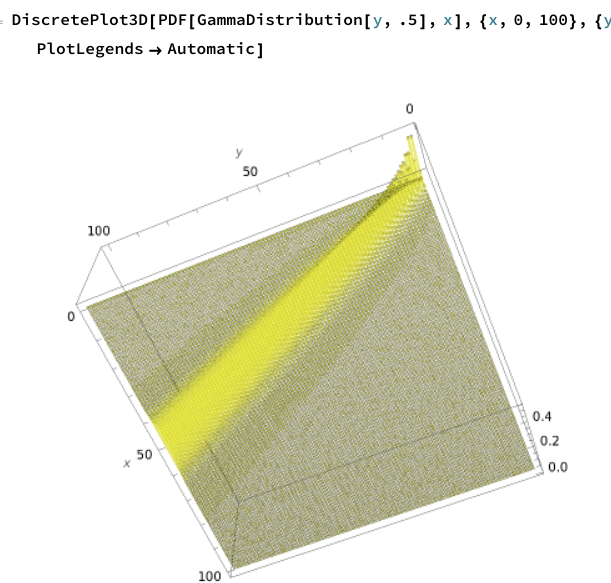 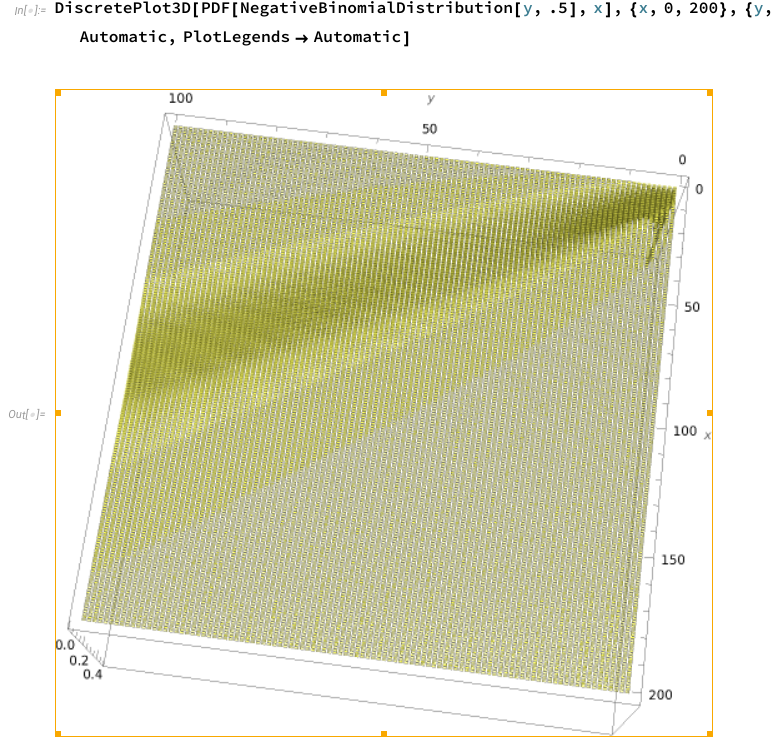 I recommend taking a look at a book called Probability Theory: The Logic of Science by E.T. Jaynes (2003), which is freely obtainable online.

You will find clues for your first and second questions on p. 205 and p. 428, respectively.

More generally, the book basically answers the question why certain probability distributions (such as Gaussians) are highly effective in predicting physical phenomena.

Not the answer you're looking for? Browse other questions tagged geometry probability-theory probability-distributions partial-differential-equations physics or ask your own question.