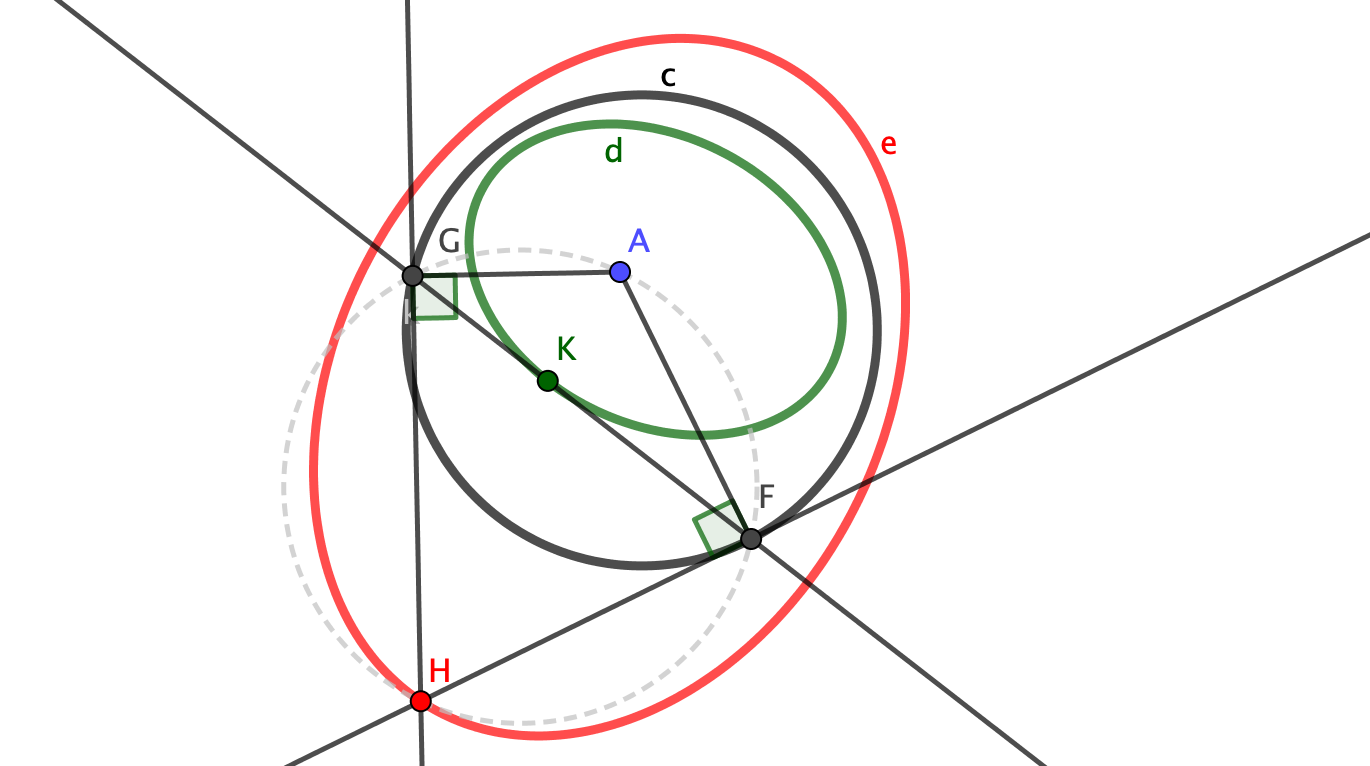 An observation: the points $A,G,F,H$ are concyclic. This suggests that the construction can be run in reverse. Start with conic $e$ instead of $d$. Let $H$ be a point on $e$ and let $G,F$ be the intersection of circle $c$ with the circle whose diameter is $AH$. Then the line $GH$ envelopes a conic as $H$ runs through $e$.

I've unsuccessfully tried a few things, such as

The problem/question given here is a simplification of an earlier math.SE question about a circumcenter locus. That question is answered with a (self described) brute-force vector proof. Although that proof should easily translate to address the present question, I was hoping for something simpler.

I'd prefer a synthetic proof, but new analytic proofs are welcome. Also welcome is any reference to a similar or identical problem and its proof (most likely in a text published in the period 1875-1925).

Starting with an observation: If $A$ were the center of $c$, then $H$ would be the pole of line $FG$ with respect to that circle. In that case, the fact that conics map to conics could be easily seen in an analytic description from the fact that a polar-to-pole transformation is only a matrix multiplication.

Maybe that is something we can show in general? I'm afraid my way of doing so has a lot of analytic brute-force aspects to it, so it might not be exactly what you were hoping for, but perhaps it can still be of some use.

Now we need to construct $H$ from these $G_i$. Start by connecting $G_i$ to $A$ using a cross product. Take the point at infinity in the orthogonal direction by multiplying with

Connect that point at infinity with $G_i$ again to get the perpendicular line in that point. And last intersect the two lines you obtained in this fashion. In formula:

If you feed this to a computer algebra system of your choice, the result may look massive at first glance. But there is a lot of common factors in there. Specifically I was able to identify a common factor of

The fact that this term must not be zero can be seen as a non-degeneracy constraint, requiring your line to be neither a tangent to $c$ nor the line at infinity (or some other line with complex coordinates passing through one of the ideal circle points). You can cancel that factor (and remove the non-degeneracy constraint) since we are dealing with homogeneous coordinates. The result can then be expressed as

Remember that the above is w.l.o.g. assuming $c$ to be the unit circle. For other circles, the entries of $M$ would need to take your choice of circle into account.

So we can confirm that the map from $g$ to $H$ is a simple matrix multiplication. For the special case discussed initially, where $A$ is the center of the unit circle $c$ you get $A_1=A_2=0$ and $M$ becomes the matrix of the unit circle, which is exactly what you multiply with to convert polar to pole.

You can obtain $g$ from $K$ by multiplying with the primal matrix of $d$, so this shows that the map $K\to H$ is just a matrix multiplication as well and as such will preserve conic cross ratios, concluding one of your attempts for a solution.

And to be extra clear, here is how $M$ helps you to get one conic from the other. If you write $D_d$ as the dual matrix of conic $d$ (i.e. a line is tangent if the quadratic form becomes zero), and $P_e$ as the primal matrix of conic $e$ (i.e. a point is incident if the quadratic form becomes zero) then up to a scalar factor you get

For non-degenerate conics you can use matrix inversion to convert between primal and dual representation of each conic.

Not the answer you're looking for? Browse other questions tagged geometry reference-request euclidean-geometry conic-sections locus or ask your own question.

8
A locus problem related to circumcenters and conic sections

29
The locus of the intersection point of two perpendicular tangents to a given ellipse
1
Locus of a point
1
A locus problem related to conic sections
0
finding the locus?
2
Locus of right circular cone vertices resulting from constant conic intersection
1
A Conic Locus Problem
8
A locus problem related to circumcenters and conic sections
2
Prove the locus of $M$ is a conic passing though $I$ and $J$.