I am having trouble accepting the reasoning behind the implication's truth table.

When P is False, why do we define P→Q to automatically be true, when the statement doesn't even apply to this situation? Why do we allow it be true without being proved true?

If possible I would love to see some mathematical examples of why this holds?

Certainly this definition of material implication in classic and intuitionistic logic has been controversial from the beginning and prompted C.I. Lewis developed alternative strict conditional (modal logic) in the early 20th century and many other logics pursued by many other people such as Church's relevance logic and Kripke's pure entailment logic.

Similar discrepancies have been observed by psychologists studying conditional reasoning. For instance, the notorious Wason selection task study, less than 10% of participants reasoned according to the material conditional.

But if you stay within the simplest classic logics for most cases, this definition is perhaps the best to track our usual logical implication. Like most math theorems, any resultant conclusion is conditional. The two vacuous truth cases you're apparently concerned about are there to let you always express true sentences. Otherwise if your antecedent is false in some cases, then your conditional sentence as an argument will need to be false and we certainly don't like this to occur. The way $p \to q$ is actually defined is nothing but $\lnot p \lor q$, usually this formula will explain things better...

It is a form of argument rarely if ever used in daily discourse. We don't usually give much thought to the implications of a proposition that we know to false. In mathematics, however, it is a legitimate method of proof.

You can prove from "first principles" that $\neg A \implies [A \implies B]$ using a form of natural deduction as follows. (Screenshot from my proof checker) 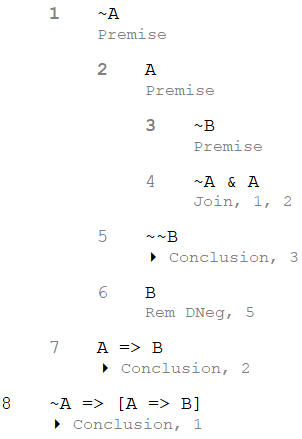 2
Relationship between conditional logic and truth table values
2
When is implication true?
1
Why a truncated table for logic implication $(p\wedge q) \implies p$ verification?
0
Confusion with Implication
4
Motivating the Implication Operator
1
Mathematical Induction and implication
2
What does implication actually mean?