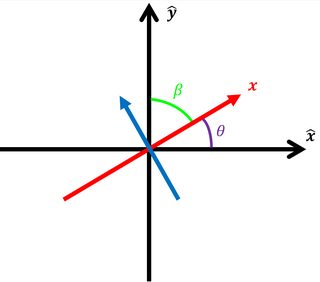 In the figure above, the red and blue vectors are the eigenvectors with the larger and smaller eigenvalue respectively. Working with the largest one, I can write the equation above the figure as \begin{align} \frac{c-a}{b} &= \tan{\theta}-\tan{\beta} \\ &= (1+\tan{\theta}\tan{\beta})\tan(\theta-\beta) \\ &= 2\tan(2\theta-\pi/2) \\ &=-2\cot(2\theta), \end{align} where to write the second equality I have used the trigonometric identity for the tangent of a difference. The third line follows from writing $\tan \theta \tan \beta = 1$ and $\beta = \pi/2 - \theta$. Lastly, I used the trigonometric relations between complementary angles to write the last equality, which can be recasted as \begin{equation} \tan(2\theta) = \frac{2b}{a -c}. \end{equation}

As you may have noticed, I absorbed the eigenvalue $\lambda$ in the equation right before the figure. This means the rest of the derivation should hold for both eigenvectors of $A$. However, I have tested the calculation with multiple cases and magically the angle which $\theta$ measures is always that between the $x$-direction and the eigenvector with largest eigenvalue.

Can anybody provide me with an explanation of why the ambiguity in the eigenvector that $\theta$ is describing seems to fade away somehow? I'd really appreciate it!

Apparently, changing the sign of the x- and/or y-arguments and swapping their positions can create 8 possible variations of the $\mathrm{atan2}$ function and they, interestingly, correspond to 8 possible definitions of the angle, namely, clockwise or counterclockwise starting from each of the 4 cardinal directions, north, east, south and west.

I think this brings me closer to the answer to my question but I need some help putting everything together.

Let me call the eigenvectors with larger and smaller eigenvalue $\mathbf{L}$ and $\mathbf{S}$ respectively. Let's look at how a few eigenvectors might look like in the $(a-c,b)$ plane. Consider the sketch that follows. The eigenvectors $\mathbf{L}$ and $\mathbf{S}$ are drawn in red and blue respectively, and the angle they make with the $x$ axis is called $\theta_l$ and $\theta_s$ respectively in the top subplot. As you can see, traversing the $(a-c,b)$ plane clockwise leads to the direction of the eigenvectors in the $xy$ plane rotating clockwise too. The arrow heads indicate the side of the vectors which falls in the range $(-90,90]^\circ$. 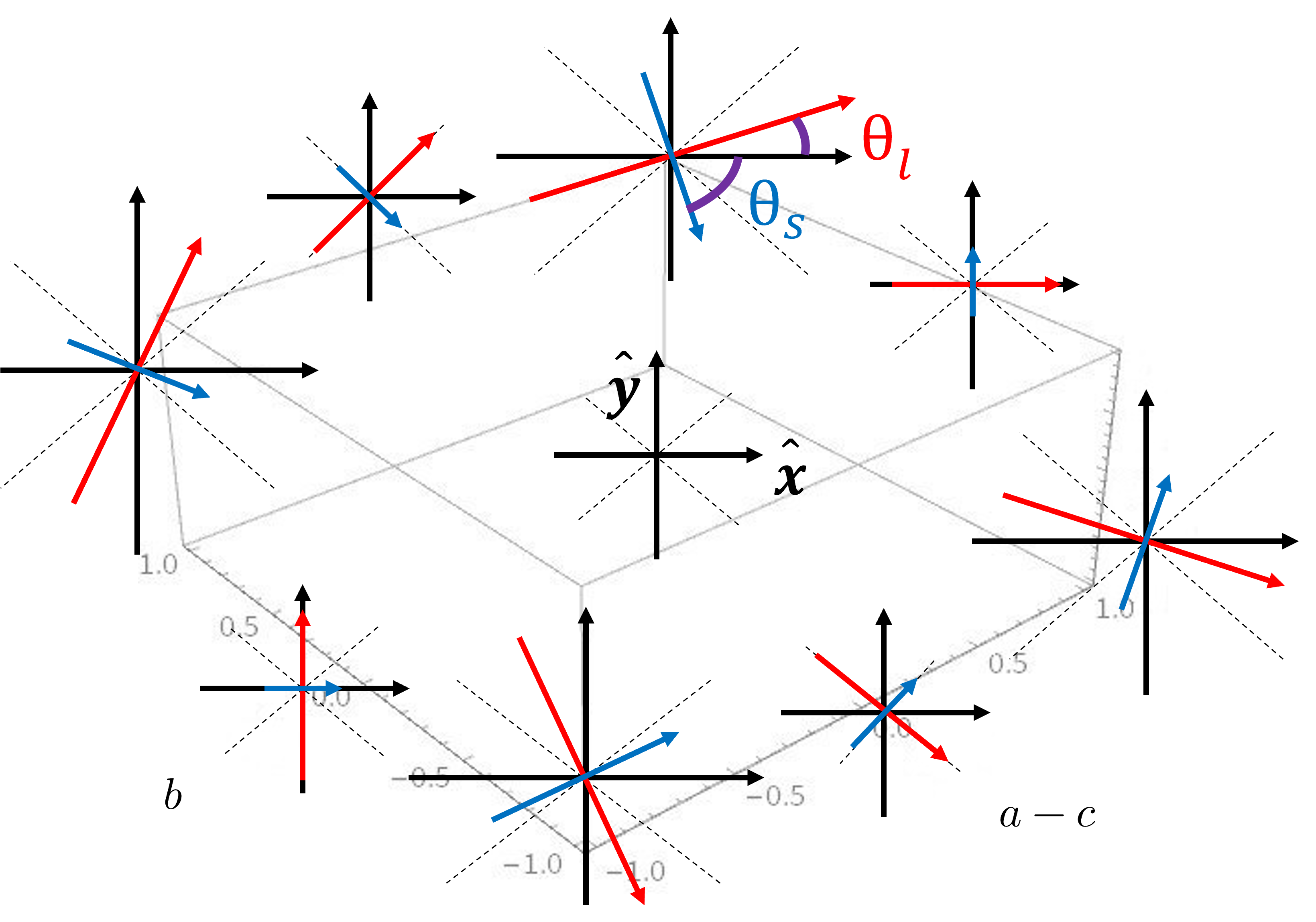 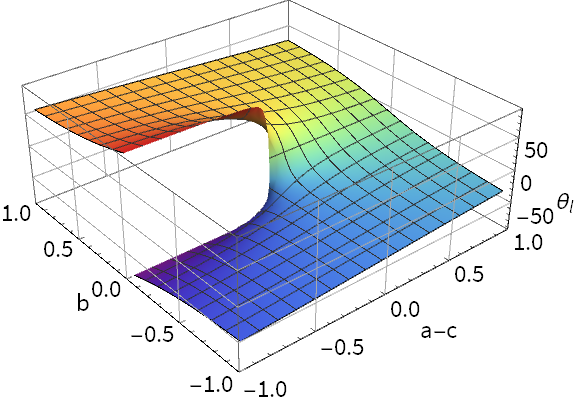 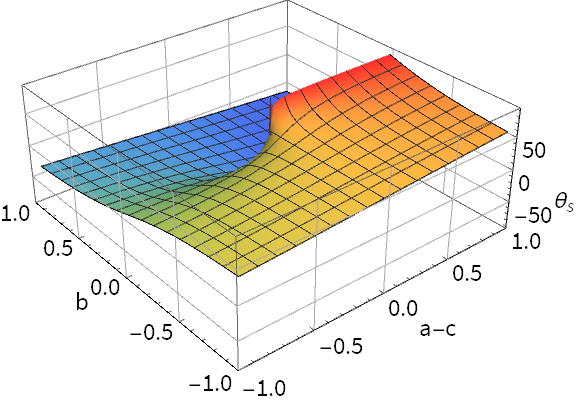 If you check the surface values you can see they match what my sketch described.

Let's come back to what was described in the wikipedia link.

But again, I don't know what is special about $\mathbf{L}$. From the derivation of the angles, either equation could have corresponded to either eigenvector. There is still a missing piece of the puzzle which I believe must lie in the derivation of the equation for $\theta_l$. Can anybody give me a hand? Any insights would be greatly appreciated.

It turns out using the first equality we get $$2\theta_l=\gamma_p=\textrm{atan2}(2b,a-c),$$ where $\theta_l$ is the angle between the $x$ axis and the eigenvector with larger eigenvalue, $\mathbf{L}$.

Now the question remaining is why does that happen? How could I have predicted that $\mathbf{p}$ and $\mathbf{n}$ would always have an azimuth that is twice that of $\mathbf{L}$ and $\mathbf{S}$ respectively?

I have found this derivation from Howard E. Haber from his Physics 116A class of Winter 2011. He obtains the same equation for $\tan(2\theta)$ by diagonalising the matrix $A$ (note the difference in notation: he uses $b$ in $A_{22}$, and $c$ in the off-diagonal terms). He then proceeds by setting constraints in the angle $\theta$. When he plugs his eq. 1 in his eq. 8 he makes it explicit that $\theta$ is measuring the angle between the positive $x$ axis and the eigenvector with largest eigenvalue. The conclusions drawn are the same as mine, but I somehow bypassed all that when I decided to use the function atan2 (unjustifiably, but it works). The question remains: why does my approach of using atan2 work?

Assuming that $b\neq 0$, the equation

However, you then go from that final equation to the equation $\theta=\frac12\arctan2(2b, a-c)$, and that is where you are making the selection.

Basically, you don't know that you can use $\arctan2$ to calculate your angle $\theta$. Taking this function means picking one of two possible $\theta$ values, and the one you discard belongs to the other eigenvectors.

5
Property of elements of a positive definite matrix