Intuition behind equation of line in Vector form

It is difficult for me to imagine how this works. Why do we have a $λ$ here? What I can think of is that $\vec{r}=\vec{a} + λ(\vec{b}-\vec{a}$) means that if we draw a line passing through $A$ and $B$ and we plug in different values of $λ$, we will get the position vector of different points that lie on that line. Am i right in thinking so? So this is a bit different from the stuff we use in $2D$ geometry or other forms like expressing the line in terms of $x,y,z$?

In general, $\lambda$ can be anything, so there can be any number of $\vec{b}-\vec{a}$'s, including fractional amounts, added to $\vec{a}$. This traces out the entire line. 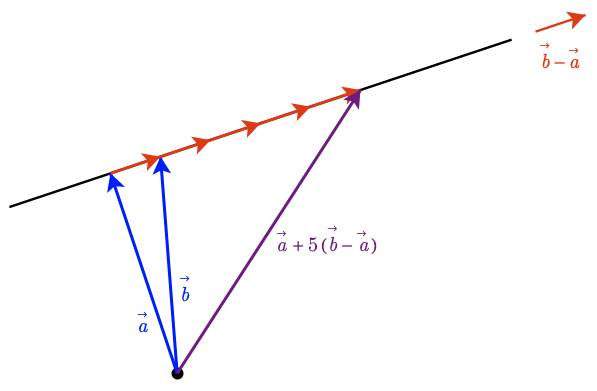 Remember, Euclidean vectors are not points; $\begin{pmatrix} 1 \cr 1 \cr 1\end{pmatrix}$ is neither the point $(1,1,1)$ nor affixed between the origin and $(1,1,1);$ rather it is "portable" and represents a particular translation in space.

The parametric equation$$\vec{r}=\vec{a} + λ\vec{u}$$ of a line is actually very intuitive: it is saying that to land on any point $(x,y,z)$ on the line, start at the origin and move directly to point $A$ (after all, $\vec{a}$ is just $A$'s position vector), then move along $\vec{u}$ by a $some$ (negative/zero/positive) multiple of its length.

Then, the position vector $\vec{r}=\begin{pmatrix} x \cr y \cr z\end{pmatrix}$ of that point is given by the vector sum of these two movements/translations.

There is one parameter҂, $\lambda,$ because a line has one degree of freedom҂: the real-valued multiple that I mentioned above is the value of $\lambda$ that lands us on that particular point (and which gives its particular position vector $\vec{r}$). As $\lambda$ varies over $\mathbb R,$ every single point on that line will have been covered.


҂ Lines (including curved lines) in $3$-D space are nonetheless $1$-dimensional objects in the sense that when constrained to the line, a single number (parameter) is sufficient to fully specify the position of each point. This is why their parametric equations (whether in $2$-D space or $3$-D space) contain only a single parameter. Planes, on the other hand, have two parameters in their parametric equation $\vec{r}=\vec{a} + λ\vec{u}+\gamma\vec{v}$.
Share
edited Oct 20 at 16:31
answered Oct 20 at 15:09

Rather than looking at a line lets examine a line segment beginning at the point represented by a position vector $p$ and in the direction of some other vector $x$ that tells us the orientation and length of the segment. Geometrically this means we simple add $p + x$ to find where the line segment ends, but what if I want to label every position on the line segment? Well, looking at the half way point along the segment we see that it's at position $p + \frac{1}{2}x$ and a quarter is $p + \frac{1}{4}x$. Examining other points on the segment we see that as long as we pick some scalar multiple of $x$ between zero and one it represents a point on the segment. This gives us the geometric intuition as to why we can now parameterize the line segment as $p + \lambda x$ for some real number $0 \leq \lambda \leq 1$. Now that we have the segment parameterized all we have to do to get the entire line is let $\lambda$ take on any real value. Note that the dimension of the space was irrelevant here as everything was happening in the plane containing $p$ and $x$ so the two dimensional case is sufficient for geometric purposes.

Not the answer you're looking for? Browse other questions tagged geometry vectors intuition 3d or ask your own question.