If two curves only touch, do they technically "intersect"?

I was playing sprouts with a few friends the other day, and one of them tried to be clever by "squeezing" their line next to another player's line to effectively prevent any passthrough play: 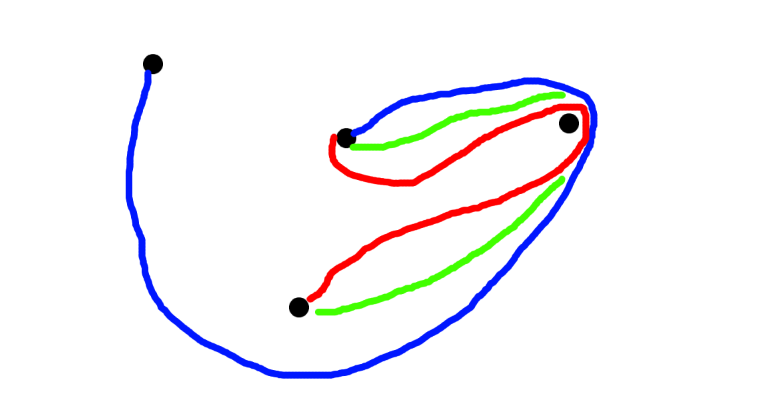 Now, I'm pretty terrible with the trackpad in paint, so bare with my low quality art here. The focus is the upper right area where the red and blue lines look like they're intersecting (just imagine they aren't as it's a side effect of my terrible paint skills). The idea the red player had was to shrink the playable region between their line and the blue player's line as much as possible, effectively closing the area off.

However, this annoyed both myself (green) and the red player. Since none of us could truly determine if the rules permitted this movement, we all agreed at the time that since the rules prevent intersection, the space between the red and blue lines was just really small. As such, pass through could still occur with the understanding that the line passing through would "shrink" into the space and expand back to normal size on the other side, effectively simulating a pass through without intersection.

Unfortunately though, my curiosity is getting the better of me and now I'm wondering if it's wrong to assume this since two objects must overlap to be considered an intersection, by definition:

(of two or more things) pass or lie across each other.

Or not? If the outermost edges of two objects only touch, is it technically an intersection?

Edit: For close votes related to this being off-topic due to not being about mathematics; my question isn't focused on the game of sprouts, but rather something I encountered during play that I was looking for clarification on. That something is terminology related to intersection and is mathematics related.

In the game of sprouts, you draw "lines" between "spots". The lines do not have to be straight, so we might call them arcs or curves instead. But let's continue to call them lines, just realizing that we do not mean "straight line".

The question is, does a line in sprouts have a thickness?

On the other hand, a mathematical curve between two points has no thickness and covers no area on the plane.

If the lines have a minimum thickness (as your drawings of them do), there is not enough space between the red and blue lines to draw another line. The green line must intersect the red or blue line (or both) because it will necessarily overlap one line or the other if you try to draw a green line through that space.

On the other hand, if we consider the lines as mathematical curves on a continuous plane, then the drawings you make are only approximations of the curves; the actual curves run somewhere down the middle of the drawings of them. In that interpretation, we can assert that the red and blue lines do not intersect (the actual lines pass somewhere close to, but apart from, the place where the drawings of them intersect). If two curves run alongside each other like this without intersecting, it is always possible to pass a third curve through the space between the two curves. Your drawing of the green line could be seen as a schematic of how the ideal curves actually will be arranged. Viewed that way, the move should be considered legal.

By the way, in that interpretation even the fact that the drawings of the red and blue lines touch would be considered an artifact of the drawing and not an actual intersection.

Since this game was invented by mathematicians, I would tend to think that they meant the "lines" to be mathematical curves rather than objects with a thickness and an area on the plane. Another argument for this viewpoint is that the game is apparently meant to be a game of logic rather than a game dependent on drawing skill. There are mathematical statements about the length of a game that would seem to depend on this interpretation; in particular, I think the formula for the minimum length is not true if you consider the lines to have thickness.

As a practical matter, good etiquette in the game would seem to require that when drawing a line, you leave enough space for additional lines to be drawn. The blue player should have drawn the line much further away from the spot, and the red line should have been drawn midway between the spot and the blue line.

A technical term for "just touch" is "tangency". In common usage of the word "intersect" and also the English Wikipedia page for "tangent", this would still count as an intersection. I also don't think this sort of move is allowed in Sprouts, just based on how the game has been analyzed.

Here are two circles that touch (they have exactly one point in common). When seen as sets of points on the plane, they "intersect" in the sense that the set of common points is non-empty. However, they do not intersect in the sense of "crossing": The smaller circle is entirely inside the larger one (it could equally well be entirely outside). Straight lines cannot touch without intersecting in this stronger sense (except at the ends, but then they are technically "line segments"), but non-straight lines can.

Not the answer you're looking for? Browse other questions tagged geometry terminology combinatorial-game-theory or ask your own question.

3
A game involving points in the integer plane - who wins?
3
Flatland analogy of a hypersphere passing through our space
2
Algebraic solutions for Poincaré Disk arcs
2
Connection of two objects in coordinate system
0
Finding the closest point on an edge
6
Area of Shaded Region Inside Quadrilateral
1
intersecting lines in the projective plane
3
Proof of conformal property for circle inversion