Dandelin, the geometer who discovered the celebrated Dandelin spheres, came up with a beautiful proof using "3D lifting" technique that is analogous to the 3D proof of Desargues' theorem. The proof makes use of the property that for every conic section we can find a one-sheet hyperboloid which passes through the conic.

I managed find the source of this, that is, Dandelin's paper "Hyperboloids of revolution and the hexagons of Pascal and Brianchon", translation available for example here. However, it seems that the paper in question and its structure and language are rather old and partly due to that I find it very hard to follow.

I am familiar with the basics of hyperboloids but I am not quite sure what Dandelin's proof of Pascal's theorem in section 16 is trying to convey. Taking that into account, could anyone help me understand the proof better? Maybe rephrase it or guide me in the right path?

A good place to start is this blog post on Dandelin's proof of Brianchon's Theorem.

A single sheeted hyperboloid is a ruled surface containing two sets of lines. The blog post calls them A-lines and B-lines, but we may as well call them red and blue lines. Any given pair of red and blue lines will either meet or be parallel to one another.

Pick six lines, three of each color. They will meet up to form a non-planar hexagon, called a skew hexagon.

The diagram below, taken from the blog post, shows such a skew hexagon with alternating red and blue edges and the three yellow diagonals. The diagonals are shown to be concurrent, mainly because three planes intersect in a point. 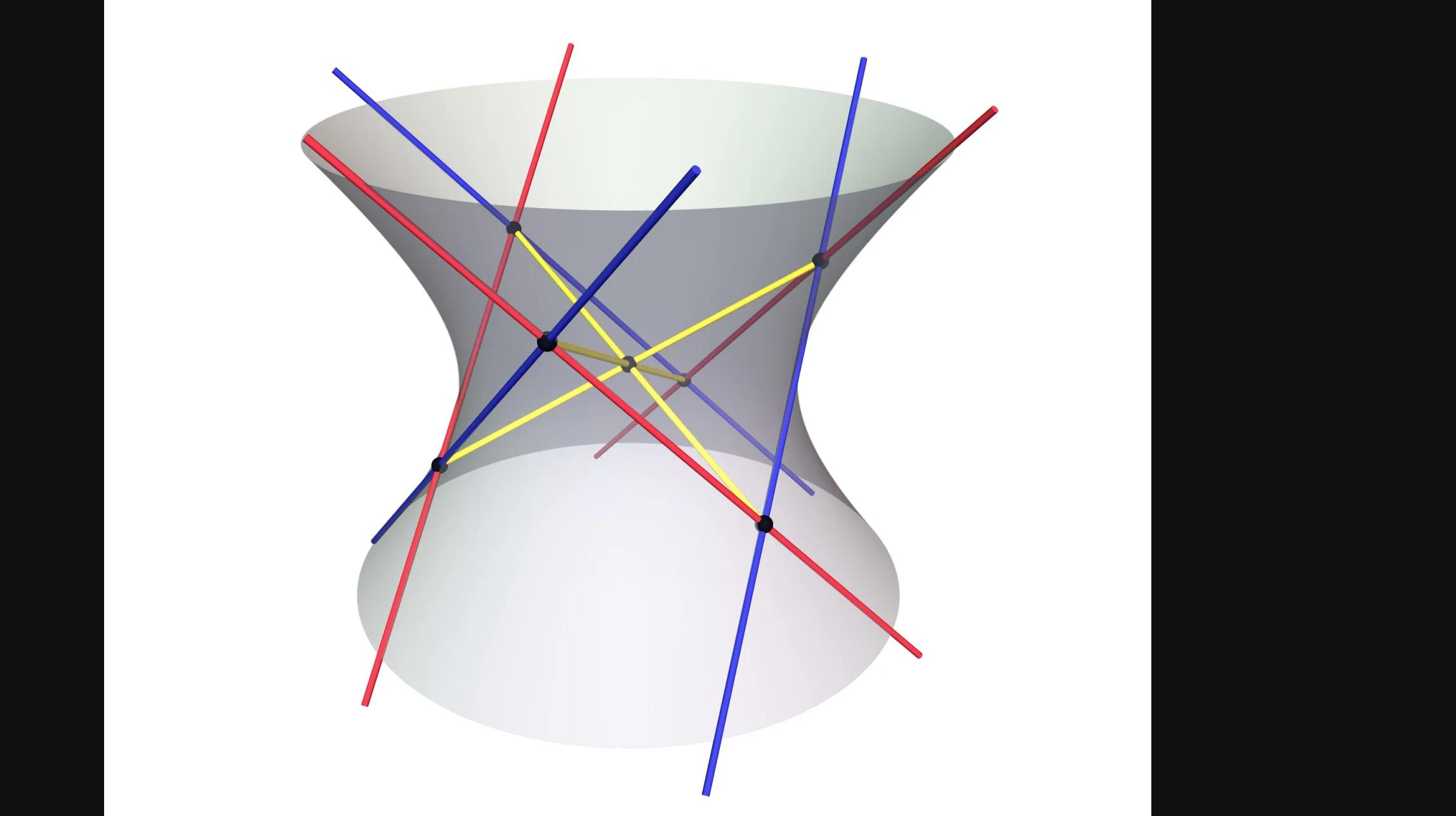 In sections 13-15 of the translation Dandelin defines an angle plane as the plane formed at a vertex by its incident edges. He shows that, for a skew hexagon, angle planes of opposite vertices meet in a line, and that these three lines lie in a common plane $p$.

He won a prize for this (from Ruff, An Extension of Pascal's Theorem)

In 1825 the Académie Royale de Bruxelles proposed as a prize topic the extension of Pascal's theorem to space of three dimensions. The prize was won by Dandelin, who showed that a skew hexagon formed of three lines from each regulus of a hyperboloid of revolution has the Pascal property that pairs of opposite planes meet on a plane, and the dual, or Brianchon property, that the lines joining pairs of opposite vertices meet in a point.

Hopefully, pondering this answer, along with the blog post and the Dandelin translation, will clarify what's going on. (The original 1826 paper is here.)

Not the answer you're looking for? Browse other questions tagged geometry proof-explanation conic-sections or ask your own question.