What exactly are the differences between real multivariable limits and complex limits?

where the real limit definition of real multivariable applies.

2.1. UPDATE 1: While I've found a textbook outside our syllabus that talks about $z \in G$ (by $G$ i mean domain of $f$), I've just checked out a textbook in our syllabus (Brown Churchill) that doesn't seem to have $z \in G$. What's going on please? 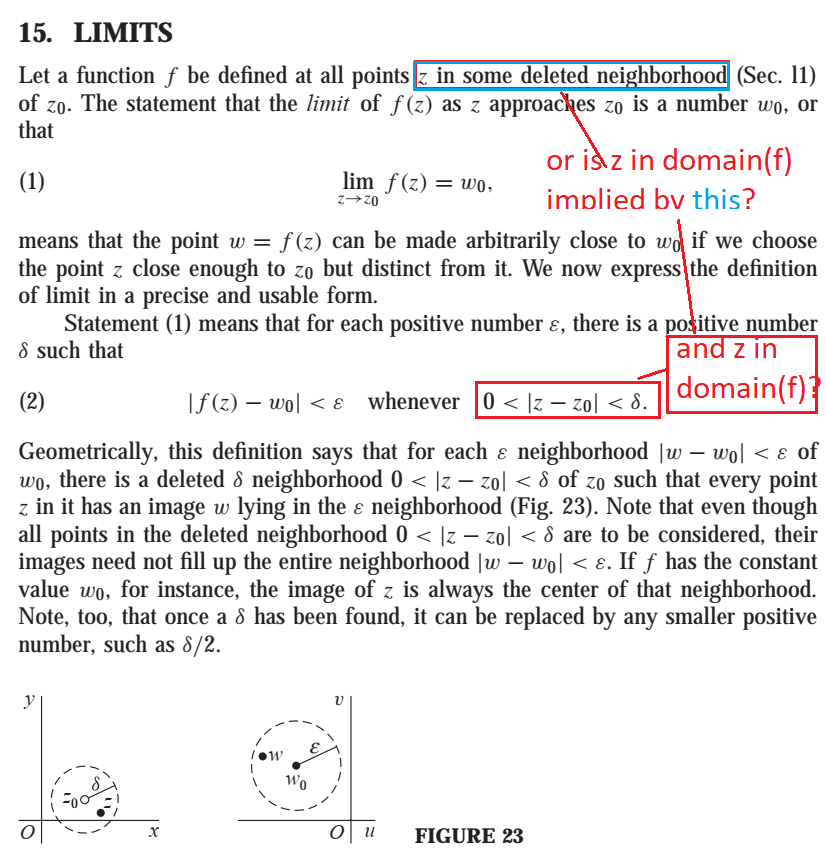 If there's such a difference then I think the 2 $\lim$'s are actually different like we ask for the 'complex limit' vs the 'real limit'. I guess both the complex and real limits are equal if they both exist, but apparently the complex limit has stricter requirements or something. So the only difference in output is whether they exist or not.

Note: This is the correct version of the incorrect question I asked previously.

There is no difference between the "real limit" and the "complex limit". In the definition (2), you must always take $\delta$ sufficiently small so that the punctured disc $0 < |z-z_0| < \delta$ lies entirely in the domain of $f$. This is possible because of the condition (1.1).

Not the answer you're looking for? Browse other questions tagged real-analysis complex-analysis limits analysis multivariable-calculus or ask your own question.

2
What exactly is the relationship and are the differences between multivariable limits and complex limits?
0
Is it legit to put a condition under a limit like $\lim_{\substack{(x,y) \to (0,0) \\ y=0 }} \frac{x}{x^2+y^2}$?
0
Differences in domain for definition of real multivariable limit