Given is an arbitrarily oriented ellipse in $\mathbb{R}^3$ that is by parallel projection mapped onto $xy$- and $zy$-planes. How can I derive the directions and lengths of the semi-axes of the original ellipse from the $2$ projections? (There might be $2$ solutions that are related by reflection. Knowing a single solution is sufficient.)

What is known? (see here)

Consider all conjugated diameters (i.e. tangential parallelograms) of the $2$ planar ellipses to find that combination that is the projection of semi-axes of the original ellipse.

where $r = [x, y, z]^T$, and $r_0$ is the center of the original ellipse which can be found directly from the centers of of the two projections, and,

Now we simply subtract the two equations, this leads to,

Hence, the vector $p$ can parameterized as

Hence $p$ lies in a plane spanned by $v_1, v_2$. (Actually, from the above expression, it is evident that there are two such planes).

Back to the expression for $r$, we have

One last step, diagonalize the $2 \times 2$ matrix $(W^T Q_1 W)$ into $R_w D_w R_w^T$, then the eigenvalues $(W^T Q_1 W)$ which are the diagonal elements of $D_w$ are simply the reciprocals of the semi-major and semi-minor axes lengths of the original ellipse. And the direction of the axes can be found using the rotation matrix $R_w$, this is because

Remark: $\text{rank}(Q_1-Q_2)$ can also be $1$ in the special case where the plane of the original ellipse is perpendicular to the $xy$ plane or the $yz$ plane, resulting in a projection that is a straight line segment and not an ellipse in the normal sense. In this case, the plane of the original ellipse can be determined from the line segment, in the $xy$ plane and $z$ axis, or the line segment in the $yz$ plane and the $x$ axis, , and the solution method described above still applies.

In any case, having found two conjugate diameters, the original ellipse is fully determined. Its axes, if needed, can be found with the geometrical construction explained here. 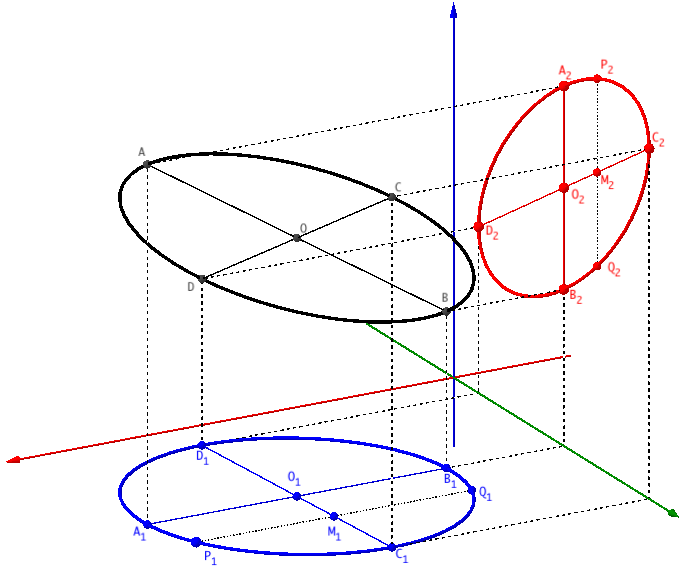 To help visualise the solution, I added another figure with both possible ellipses. Note that they have diameter $CD$ in common. 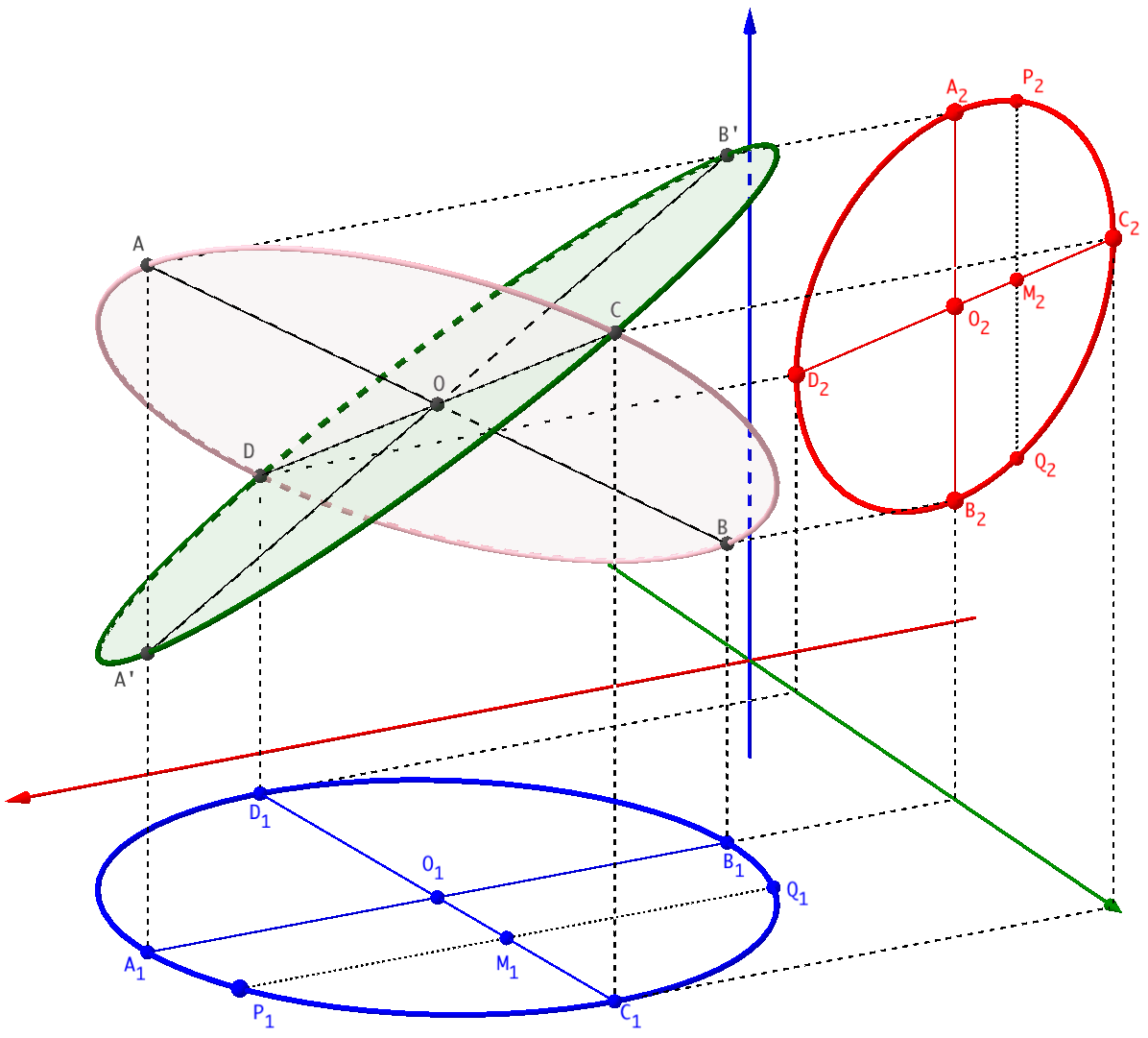 Not the answer you're looking for? Browse other questions tagged geometry trigonometry conic-sections or ask your own question.

12
Passing an ellipse through 3 points (where 2 two points lie on the ellipse axes)? [Updated with alternative statement of problem and new picture]
7
To construct an ellipse, being a projection of a great circle, given two points on it
3
Finding equation of an ellipsoid
1
Calculation method for a British Standard based on finding an ellipse given tangents?
1
Eccentricity is invariant for ellipse defined by intersection between plane and ellipsoid [can't be correct]??
0
Projecting a point from an ellipse onto an analogous circle
1
How to project the position vector of an ellipse onto a plane?
8
When is the intersection of a cone and a cylinder is planar?