For a triangle $ABC$, prove that for a point $P$ on the angle bisector of $\angle BAC$,$|PL|=|PK|$ where $L,K$ are intersections of circles with sides

In a triangle $ABC$, the point $P$ lies on the angle bisector of $\angle BAC$. We define a circle $\alpha$ with diameter $AP$, circle $\beta$ which passes through $B$ and is tangent to $\alpha$ at the point $E$, where it intersects $AB$, and circle $\gamma$ which passes through $C$ and is tangent to $\alpha$ at the point $F$, where it intersects $AC$. Then the points $K,L$ are defined as the intersections of $BC$ with $\beta$ and $\gamma$ respectively. The task is to prove that $|PL|=|PK|$. 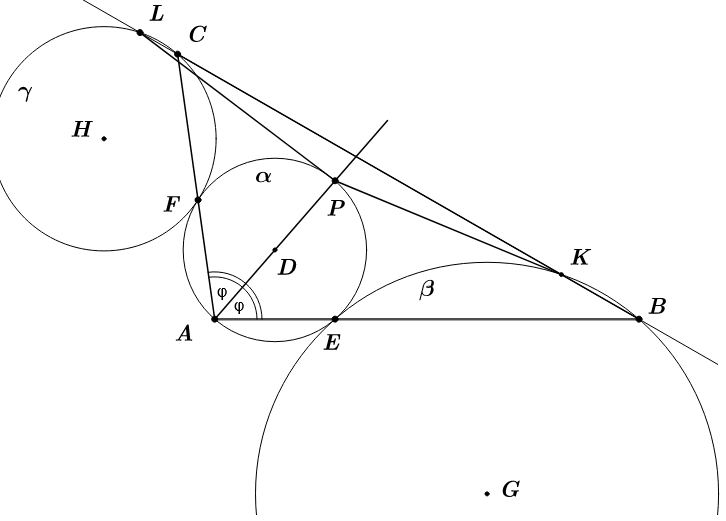 I have not been successful with generalising this proof to all triangles, however. It certainly cannot make use of symmetry in a similar manner. How should I approach this?

The point where circle $\alpha$ intersects $AB$ is the foot of the perpendicular from $P$ on $AB$, call this point $D$. Circle $\beta$ is tangent to $\alpha$ at point $D$ and thereafter the midpoint of $AP$, $D$, and the centre of $\beta$ are collinear. By similarity, the centre of $\beta$ lies on the line parallel to $AP$ through the point $B$. Extend $PD$ to meet this parallel line at point $Q$. $BQ$ is the diameter of circle $\beta$. Now, observe that $K$ is the foot of the perpendicular from $Q$ on $BC$.

So we reframe the problem as follows :

Draw parallel lines to $AB$ and $AC$ through $P$ intersecting $BC$ at $M$ and $N$ respectively. 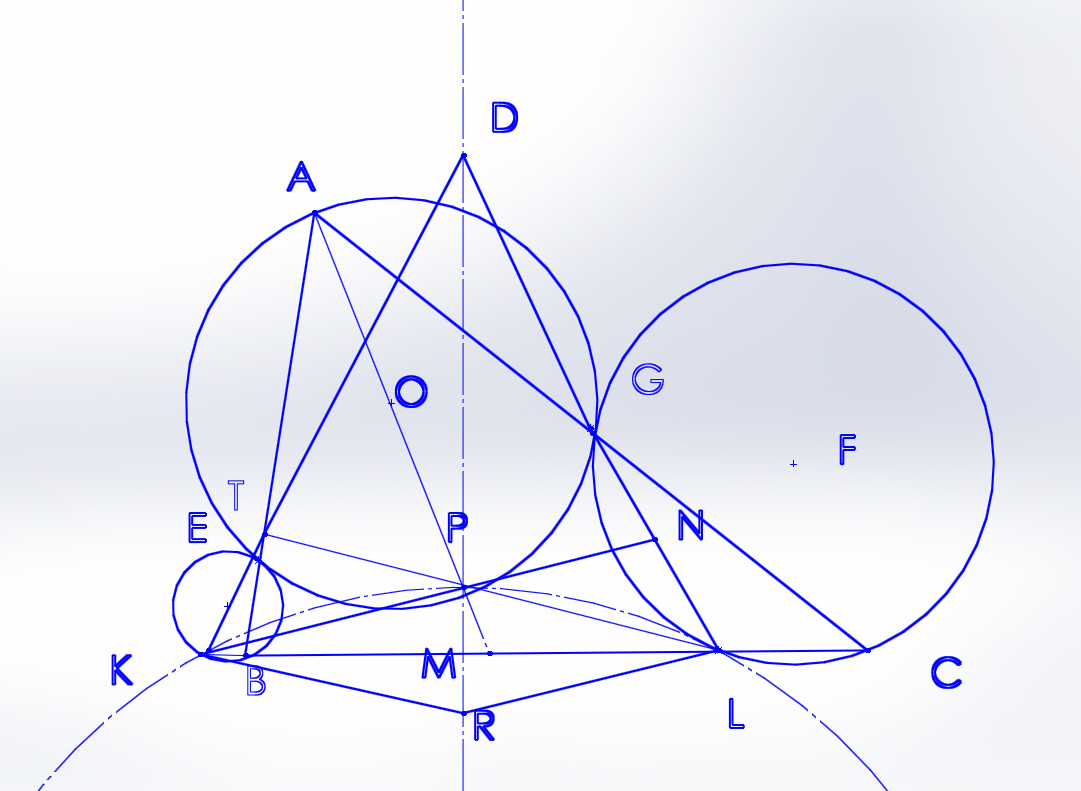 Hint: M is mid point of KL. You have to show trapezoids TPMK and MPNL are equal which results in PL=PK.

You may also use following figure: 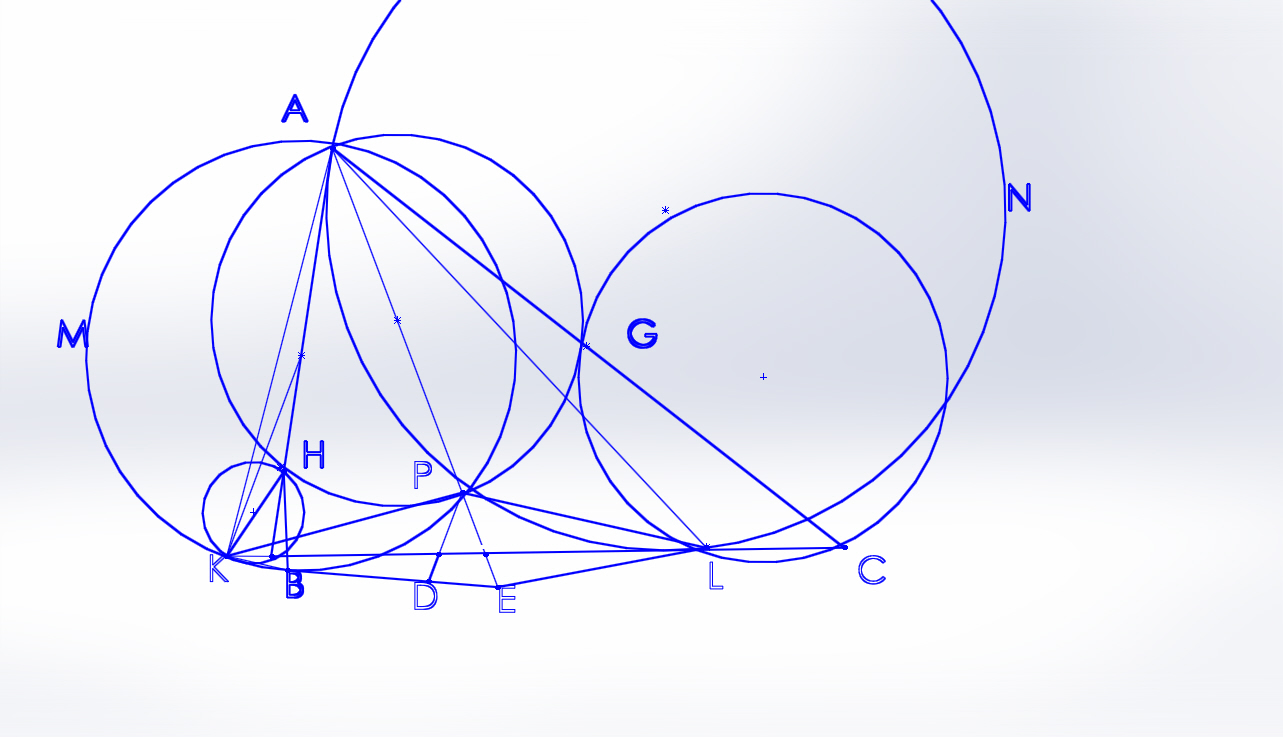 In this figure M and N are circomcircles of triangles APK and APL respectively. AE is radical axis of these circles and EL=EB. If DE=KB then DK=EL and triangles PKD and OLE are equal that means PL=PK. 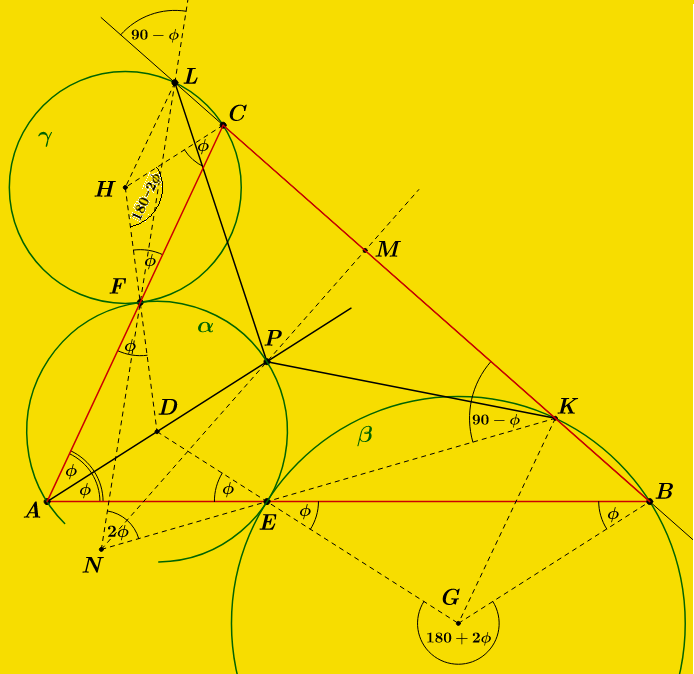 As the final step of this proof, consider the two right triangles $KMP$ and $PML$, where we have $\measuredangle KMP = \measuredangle PML = 90^o$. The side $MP$ is common to both triangles. Since $M$ is the midpoint of $KL$, we have $KM =ML$. According to SAS rule, the two triangles are congruent requiring $PK = PL$.

1
In this figure, prove that $H$ lies on the circle iff it lies on the perpendicular bisector of $\Delta ABC$
1
Prove In Equilateral Triangle $ABC$ $AM$ and $AN$ are equal
2
Prove that the center of a circle within a constructed triangles lies on the angle bisector
0
Finding side of a triangle, given two sides and angle bisector
1
In triangle $ABC$ find angle $\angle BAC$ given that...
4
$AB_1$, $AB_2$, $AB_3$ are the altitude, angle bisector, median from vertex $A$ of $\triangle ABC$; arrange lengths $BB_i$ in ascending order
1
Help with proving the following points are collinear
7
Suppose $\angle BAC = 60^\circ$ and $\angle ABC = 20^\circ$. A point $E$ inside $ABC$ satisfies $\angle EAB=20^\circ$ and $\angle ECB=30^\circ$.
3
Proving line is tangent to circle.
3
In triangle $ABC$, $AP$ is the angle bisector