I'm having trouble with a Calculus question where I am supposed to use the following formula to calculate the area of a surface:

Suppose that $f$ and its first-order partial derivatives are continuous in the closed region $R$ in the $xy$ plane. So, if $S$ is the measure of the area of the surface $z=f(x,y)$ above $R$,

The question asks me the following:

I made the following plot of the situation described in the question. To make things simpler, I plotted only the intersection of the sphere and the cone with the $xy$ plane: 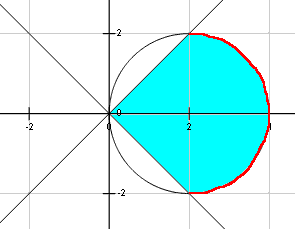 To apply the given formula, I have to find the region $R$ over which the double integral will be computed. From the image, the region of integration $R$ is the region between the line $x=2$ and the portion of the circumference marked in red. The desired portion of the surface of the sphere is above this region $R$.

So, the integration limits are the following:

The double integral is, then:

which, after some simplification, becomes:

I get stuck at this point, because I can't seem to find a way of solving this integral. I have tried to solve the inner integral

but without any success. Is the set up of the double integral correct? Or is there a way to solve the above integral and get a real result?

I will solve this problem again using the suggestion by Ted Shifrin in the comments to this question above. Doing the integral in polar coordinates, the solution becomes much simpler.

I will take the polar plane to be the $yz$ plane.

In $yz$ coordinates, the desired surface is the function $x=f(y,z)=\sqrt{4-y^2-z^2}+2$ (which corresponds to the right hemisphere of the sphere represented in the picture in the question).

Thus, the limits of integration in polar coordinates will be:

The square root inside the double integral is:

Converting the above expression to polar coordinates (substituting $y^2+z^2=r^2$):

Thus, the double integral in polar coordinates is: