You're completely right! In the interest of making this answer slightly less trivial, I'll say some more words about your idea, as well as some more advanced mathematics that it's pointing towards.

First, we should notice that a symmetry of an $m$-gon is completely determined by where the vertices get sent. After all, if we know where the endpoints of an edge go, then there's only one place to send the edge.

This shows that $D_{2m}$ is actually a subgroup of $S_n$ in multiple ways. After all, we have a choice of which $n-m$ points to be fixed, and we also have a choice of "initial configuration" of our $m$ points on the polygon (as a cute exercise, can you figure out exactly how many copies of $D_{2m}$ this gives us inside $S_n$ for $n \geq m$?).

Ok, now for some stuff not directly related to your question:

For a simple example, consider the following $3$ subgroups inside $D_8$: 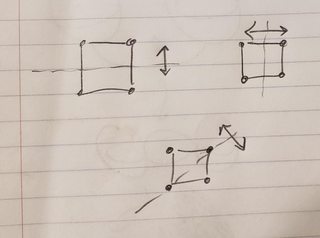 The two copies of $\mathbb{Z}/2$ given by the flips in the top row are conjugate. They're really "the same flip", up to a rotation of the square. Contrast this with the copy of $\mathbb{Z}/2$ given by the diagonal flip underneath. Even though this is the same subgroup up to isomorphism, it arises in an entirely different way from those in the top row.

The difference between "isomorphic" and "conjugate" is a subtle but important one, and quite a bit of more advanced group theory rests on this concept. I know this is a bit far removed from your original question, but it felt more interesting to chat about this then to just leave a comment saying "yes, you're right" :P

Not the answer you're looking for? Browse other questions tagged abstract-algebra group-theory symmetric-groups dihedral-groups or ask your own question.