In discussions about symmetries, I found this problem- 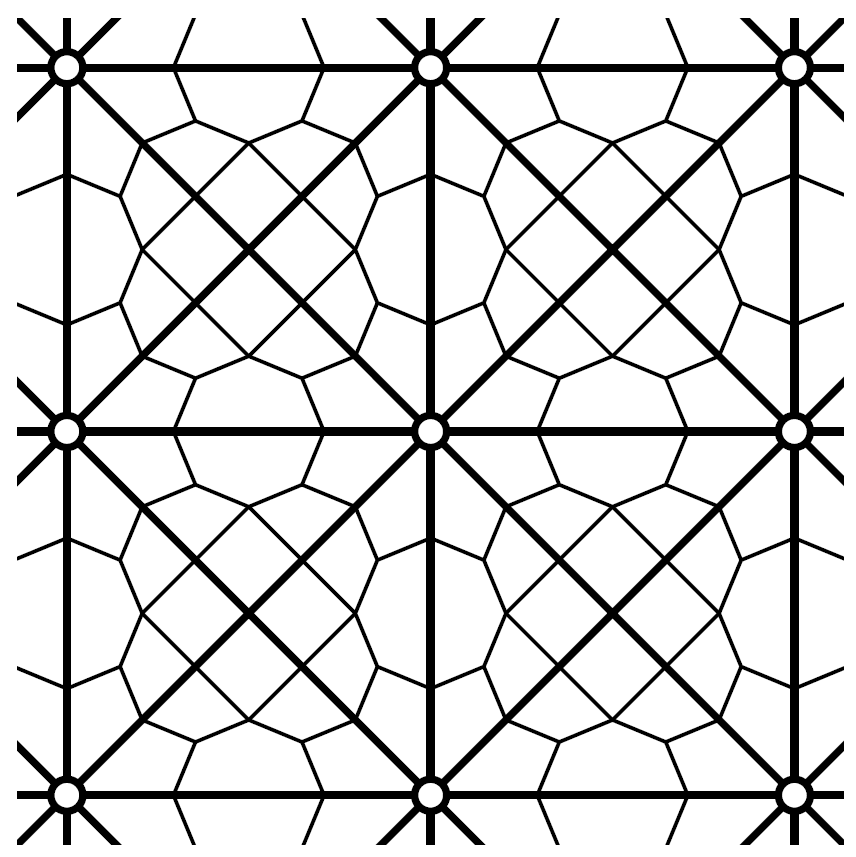 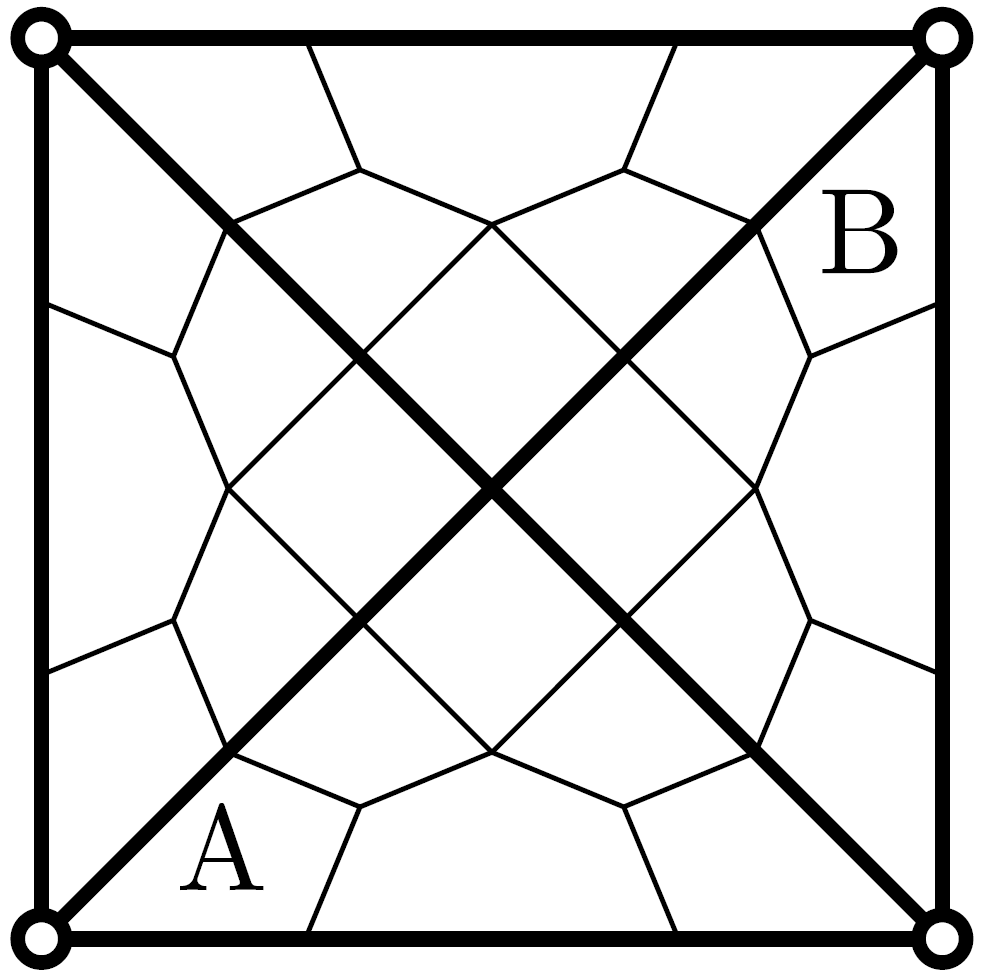 The second picture is of one single tile while the first one gives the tiling using those tiles.

Each vertex in the Persian tile is surrounded by eight quadrilaterals. Show that given any two such quadrilaterals $A$, $B$ (similar to what marked in the second image), there is a unique symmetry which carries $A$ to $B$. Find a formula for the symmetry with $A$, $B$ as shown. You may assume that the lower left vertex in the given figure is the origin and the upper right one is $(2,2)$.

Fun problem: What proportion of area in $\mathbb R^2$ is covered by the inner slanted squares? You can assume that the octagon formed at the middle due to two adjacent tiles is a regular octagon.

I noticed that the first problem looks trivial if $A$ and $B$ are connected to the same vertex. In that case, you only need to perform a suitable rotation combined with a suitable reflection. But, it doesn't look very easy to prove that this symmetry is unique. Also, if $A$ and $B$ are connected to two different vertices, I think, we will have to do some more rotation and translations. But again, how do I prove that the symmetry is unique? Also, how do I find an explicit formula?

For the fun exercise, how can one even make an idea of how big the tiles are? Looking at the picture, I guessed that maybe each small quadrilateral is of equal area, and the central square is four times it. But, in that case, the answer should be $\frac 1 7 \times 100\% \approx 14.2\%$, while the given answer is $\approx 17\%$. I have no idea how to arrive at that. Please help me proceed.

Edit: Please note that the fun problem has an extra assumption that the octagon formed at the middle due to two adjacent tiles is a regular octagon.

I think the best way to think about this type of problem is to find what is called a fundamental domain for the (group of) symmetries of the tiling. Intuitively, a fundamental domain is a smallest repeating unit from which the whole pattern is made. Of course the pattern can be built using the square tiles, but each square tile itself has symmetries, and can be built out of 8 smaller 45-45-90 triangles, each of which has no internal symmetries:

Therefor there is a unique symmetry taking the green fundamental domain to the blue one, and it's not too hard to see that this symmetry is the reflection in the red line. 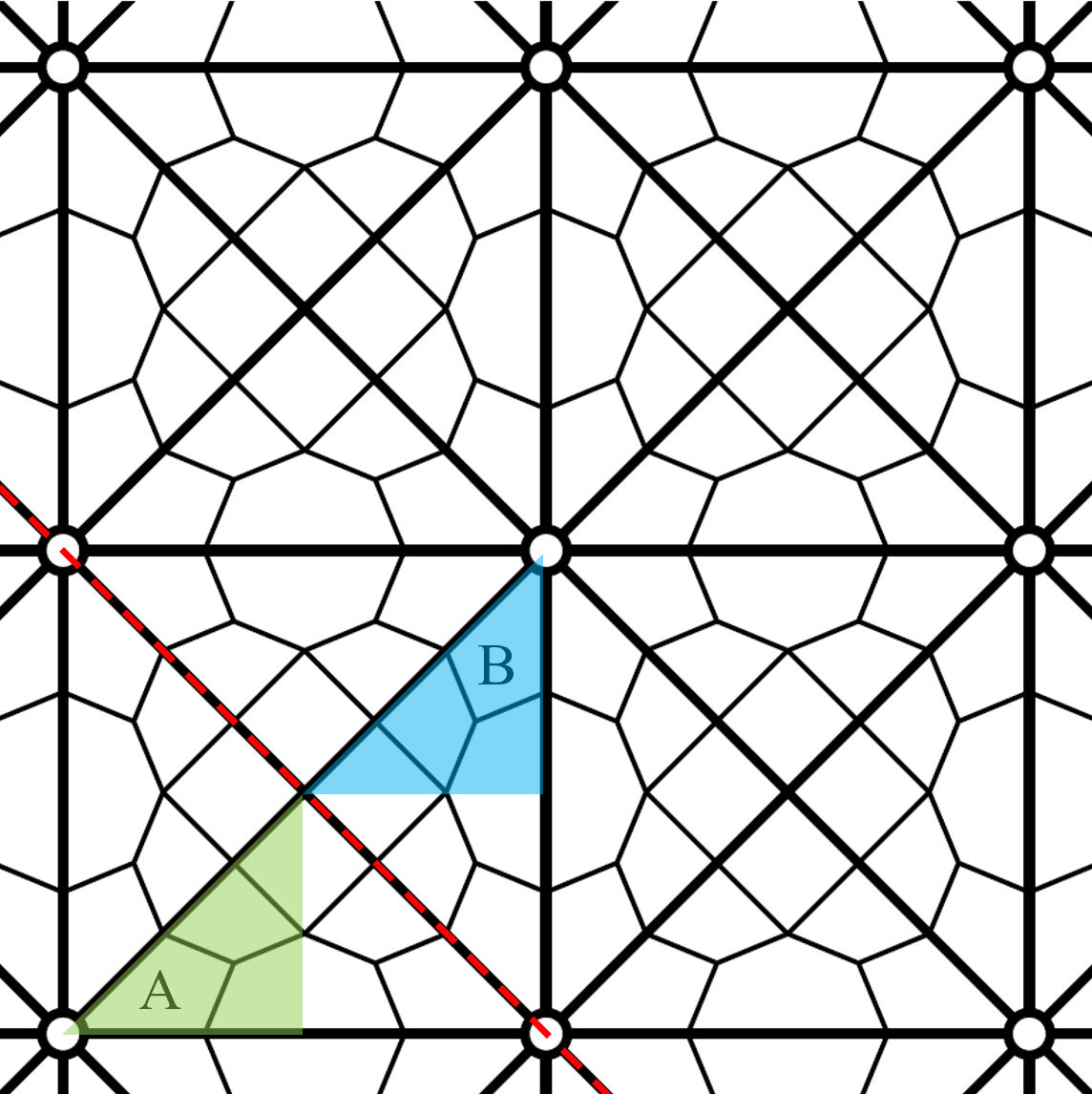 More generally, here is how you might try to find a symmetry sending one copy of a fundamental domain to another. Notice that every copy to the fundamental domain has exactly one corner at a circle. So we can choose vertical and horizontal translations so that these circles match up. Now using your observation, we have apply rotations centred at that circle, and reflections in lines through that circle to make the fundamental domains line up. Applying this approach to the case of A and B in your question, first we would translate left by 2 and up by 2 to make the circles line up, and then reflect in a diagonal line: 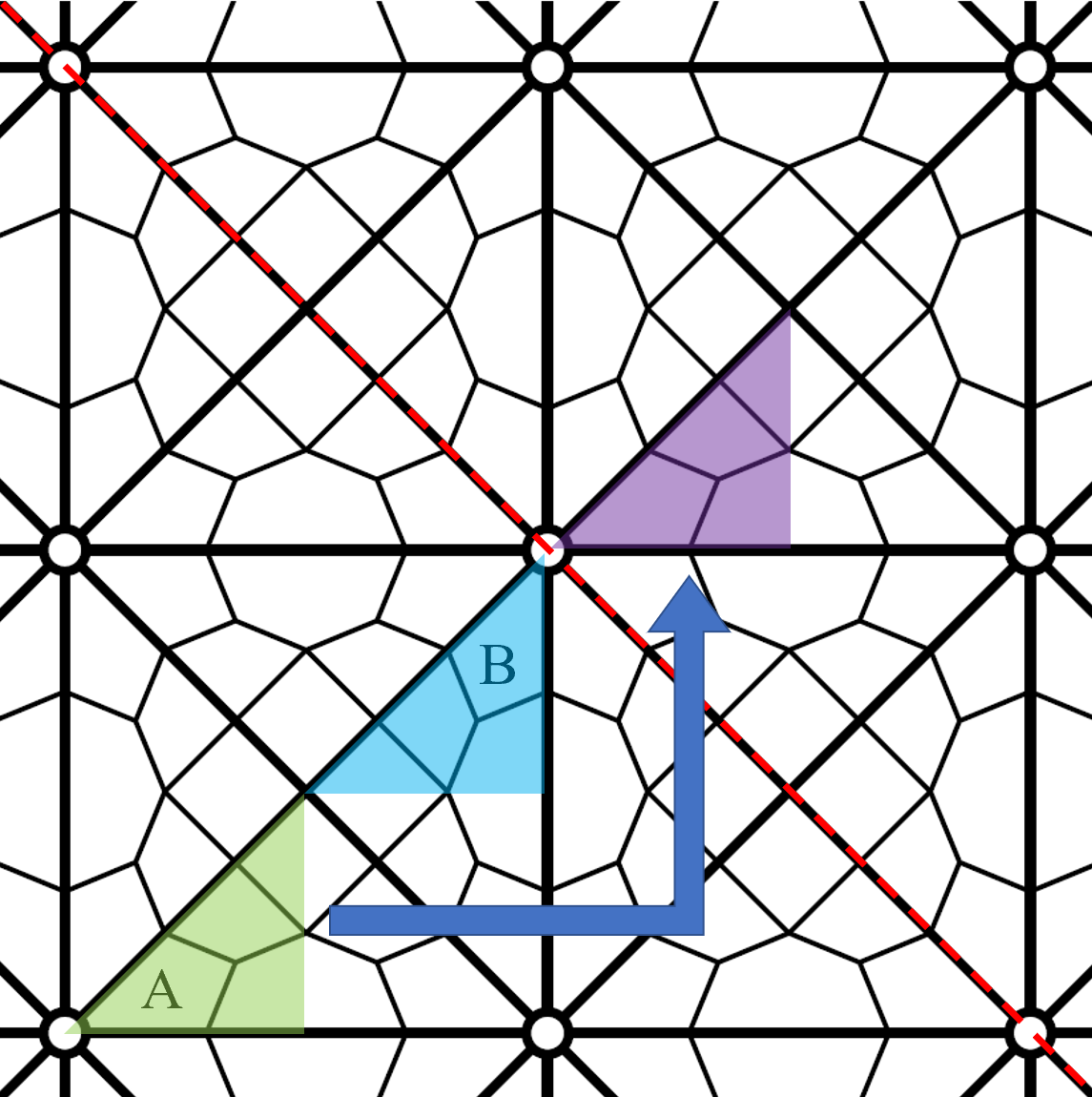 First we translate the green triangle to the purple one, and then reflect in the red line. I will leave it as an exercise to a) convince yourself that the two symmetries I have described are in fact the same symmetry in disguise, and b) use these descriptions to write down an explicit formula.

As for the final fun problem, it looks to me like there is insufficient information as you have stated the problem. Maybe it is possible if you assume that the pentagonal regions pair up to form regular octagons. Sorry I can't be of more help with this.

First on the question of uniqueness. Above I gave an intuitive explanation of uniqueness in terms of the property that a fundamental domain has no internal symmetries. In fact we have the following general theorem, which I will not prove in general, although that's a fun, if challenging exercise.

Remark: this argument still isn't water-tight rigorous, but it can be made so using ideas from group theory and metric spaces. I can add that detail in another edit, but as the question was phrased in a completely elementary fashion, I wanted to reply in as elementary a fashion as possible.

Again, simpler formulae can be given using some more complicated ideas from linear algebra, but I wanted to keep it as elementary as possible.

Edit 2: Some group theory and a more advanced viewpoint

A few brief remarks on a better way to think about all this if you have some background in linear algebra, group theory, and metric spaces. If we view the tiling as living in the Euclidean plane $\mathbb{E}^2$, then "symmetries" of the tiling are maps $\mathbb{E}^2\to \mathbb{E}^2$ which leave the Euclidean metric invariant, I'll call such maps isometries from now on. The set of all such isometries forms a group under composition $\textrm{Isom}(\mathbb{E}^2)$. This is quite easy to check, the hardest part is showing inverses, which follows from the observation that isometries must be bijections which takes a little work to prove.

It follows that the set of all isometries which fix the tiling pictured form a subgroup $G\le \textrm{Isom}(\mathbb{E}^2)$. Once this has been established, the proof of uniqueness I gave in the first edit can be made rigorous using the fact that inverses in a group are unique.

In my original answer I gave a way to find an isometry of the tiling taking an arbitrary quadrilateral labelled $A$ to another $B$ which involved first translating the tiling so that $A$ and $B$ share a vertex, and then applying an isometry fixing that vertex to make them line up exactly. This in fact follows from a general fact. Let $x_0\in\mathbb{E}^2$ be a fixed base point, then we can identify $\mathbb{E}^2$ with the vector space $\mathbb{R}^2$ by making $x_0$ the origin. Let $O(2)$ be the orthogonal group of $\mathbb{R}^2$, and let $T(2)\cong \mathbb{R}^2$ be the group of all translations of $\mathbb{E}^2$. Then the group of isometries of $\mathbb{E}^2$ can be written as a semi-direct product $$\textrm{Isom}(\mathbb{E}^2)=T(2)\rtimes O(2).$$ This is just a fancy way of saying that any isometry can be thought of as a translation followed by an isometry fixing a point. This decomposition descends to $G$, so we can write $$G=\mathbb{Z}^2\rtimes D_4,$$ where $\mathbb{Z}^2$ is the group of translations, and $D_4$ is the dihedral group of order 8 which is the group of symmetries fixing the origin $(0,0)$ as defined in the original question.

You can use the structure of $\mathbb{E}^2$ as an affine space two write any isometry as an affine transformation in terms of matrices (rather than the rather complicated formulae I give above). For details check out this page.

Finally, a small personal advertisement. I have actually taught an entire course (aimed at high school students) on isometry groups of the sphere, Euclidean plane, and hyperbolic plane, which explores these sorts of questions in more detail and generality. You can check it out for free online here: week 1, week 2, week 3, and week 4. 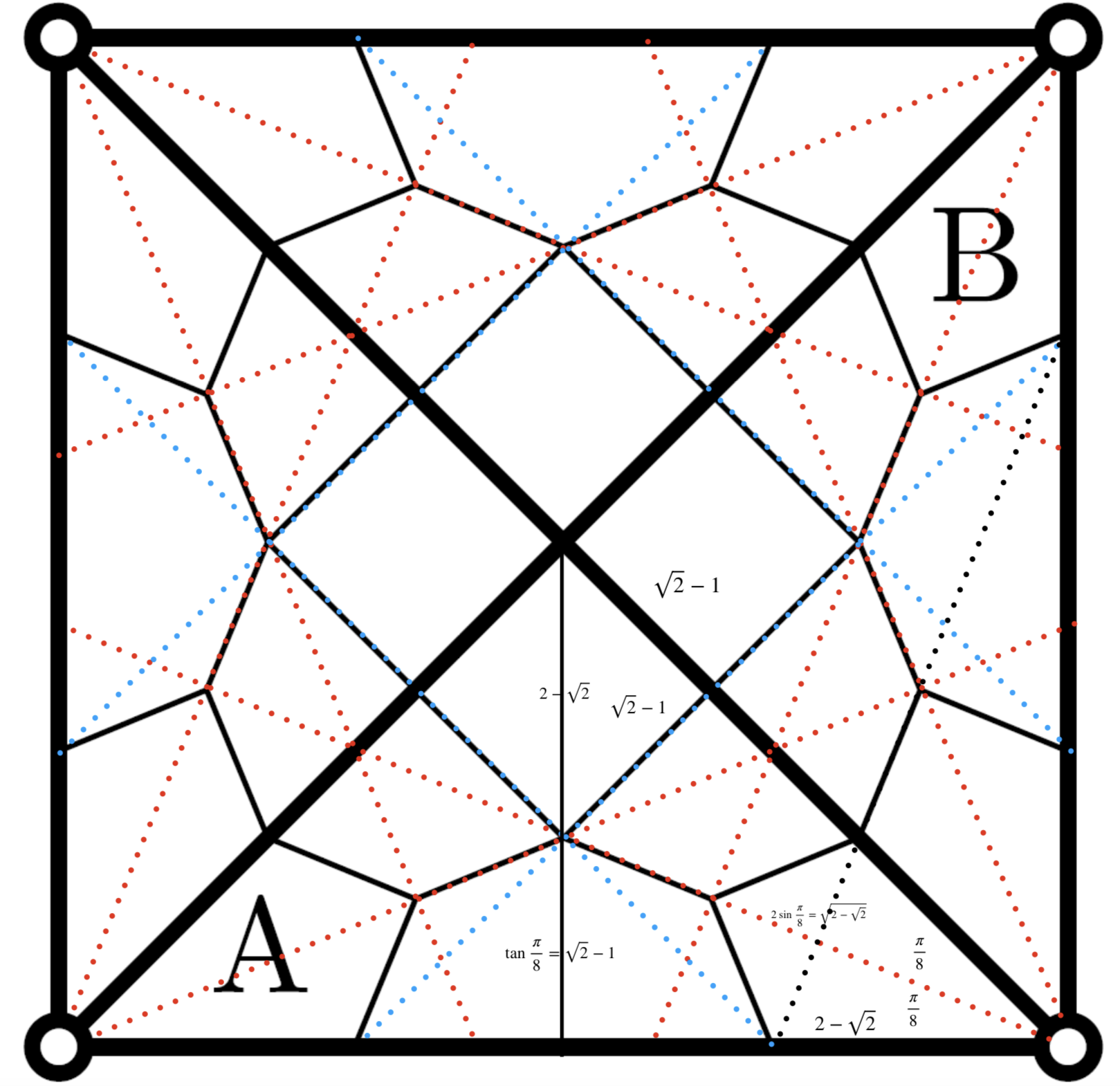 Not the answer you're looking for? Browse other questions tagged geometry area symmetry tiling or ask your own question.

8
Easy proofs of the undecidability of Wang's tiling problem?
1
What is it that determines the degree of a tile, and to what extent does the shape of a tile determine its degree?
2
How many lines of symmetry does a regular octagon have?
1
Area of Overlapping Quadrilateral Tiles
3
Why does this aperiodicity proof work?
2
Are tilings by completely symmetric polyominoes always unique?
0
Recursion: In how many ways we can tile a rectangle with size of $1\times 10$ without two adjacent red floor tiles?
0
Finding a recurrence relation for $2\times N$ tiles with red and blue tiles and utmost 2 similar colored neighbors
6
What is the maximum amount of "shore" tiles in a rectangular grid that has only "water" and "land" tiles?