Why do we assume that this quadratic has one solution?

I'm asking about a question about two lines which are tangents to a circle. Most of the question is quite elementary algebra, it's just one stage I can't get my head round. Picture here:

Both lines have equation $y = mx + 12$ where $m$ represents two gradients to be found (both negative).

At this point I was confused about what step to take to get $m$ or $x$. Looking at the worked solution, it says "There is one solution so using the discriminant $b^2 − 4ac = 0$..."

From here it's straightforward algebra again, producing another quadratic based on the $b^2 - 4ac$ of the previous quadratic:

My question is I don't understand how we can tell it's right to assume $b^2 - 4ac = 0$ and how we can see that's the right step to take in this question.

Obviously this feels intuitively wrong since we know there are two solutions for m. Is the logic that m is a gradient which intersects with the circle once? But if so, how do you see that this is the right equation to decide it only has one solution? (I had assumed before looking at the worked example if I needed to do something more complicated based on the equations of the radii or the knowledge that the two tangents would be equal length from the circle to where they meet or something.)

As you can tell, this question is based on fairly elementary algebra; I'm more concerned about knowing why this is the right step to take here.

Many thanks for any answers.

Notice that in $(\ref{1})$, if you take $x$ as a given constant and solve for $m$, you are answering the question: Given an $x$ intercept of the line through $(0,12)$ with the circle, determine the slope of this line. It might happen that there are two points, one or none on the circle with that given $x$ coordinate, hence the number of solutions for $m$. This isn't, however, what we are looking for.

Just to restate the essential point so that it doesn't get buried:

Conveniently, we also (should) know that a quadratic equation has only one solution if and only if its discriminant is zero. So we don't actually need to solve the original equation — it's enough to find the value(s) of $m$ for which the discriminant is zero. But that's just an algebraic shortcut. If we didn't know this fact already, we could've obtained the same result slightly more laboriously by first applying the quadratic formula to find the (up to) two solutions, and then finding the value(s) of $m$ for which they are equal (i.e. actually just one solution).

The intersection point(s) of two curves is given by the solution(s) of their simultaneous equations. 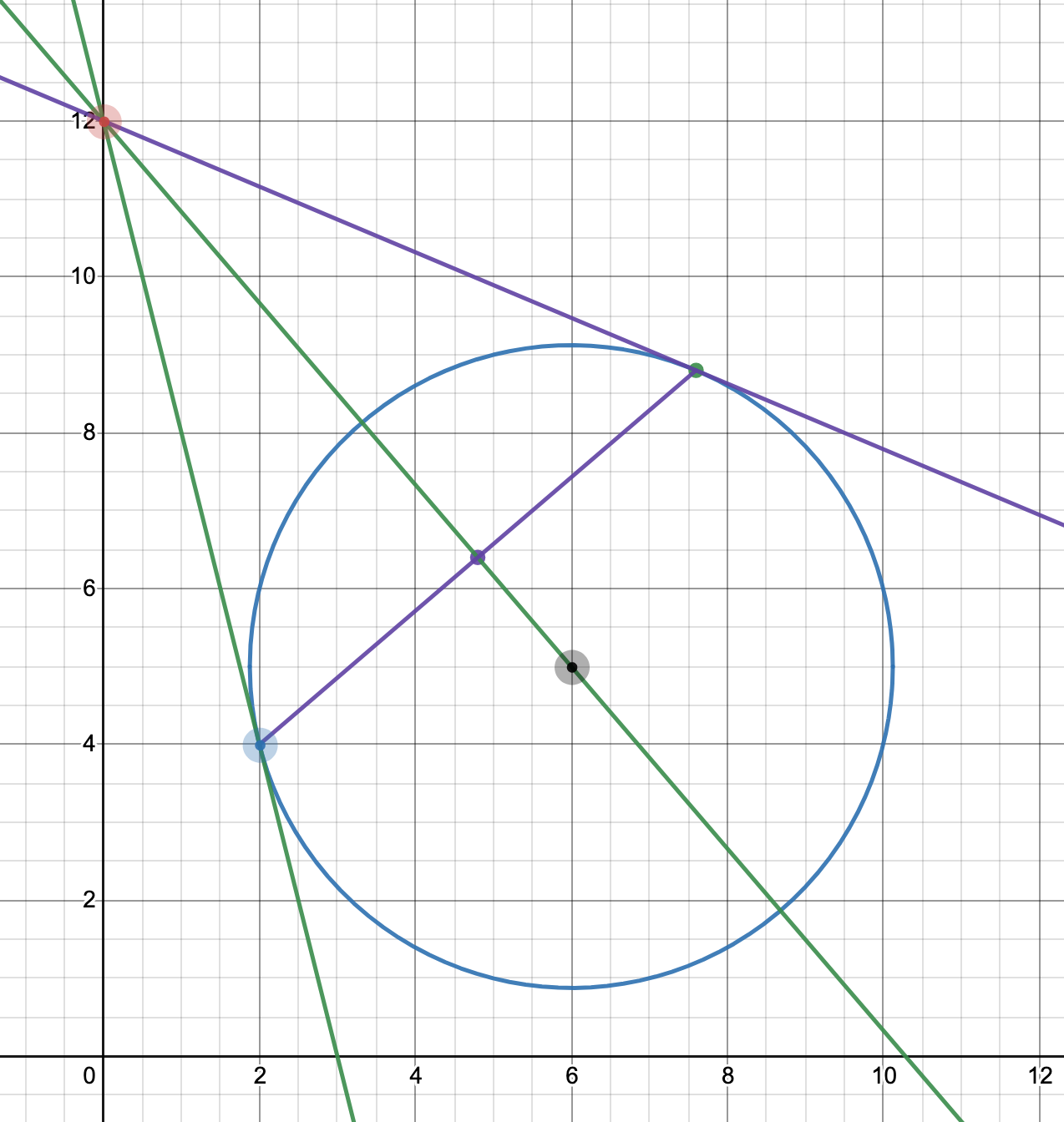 Other people have explained in depth your question about the determinant, and why it's zero. In summary:

When you substitute the line's equation into the circle's equation, the resulting equation says in effect "given a line with formula y=12-mx, for some arbitrary value "m", what values of x does the line intersect/touch the circle?"

The values of "m that we want are those making the line a tangent. But what defines a tangent?

For any given value of "m", that is a tangent to the circle, the line must touch the circle at exactly one point. Not zero points, not 2 points. Just one.

You then get an equation for "m", which gives you "gradients where the line will be a tangent to the circle". Its a quadratic because two values of m can do this.

Geometrically, there is a very intuitive solution however, using symmetry 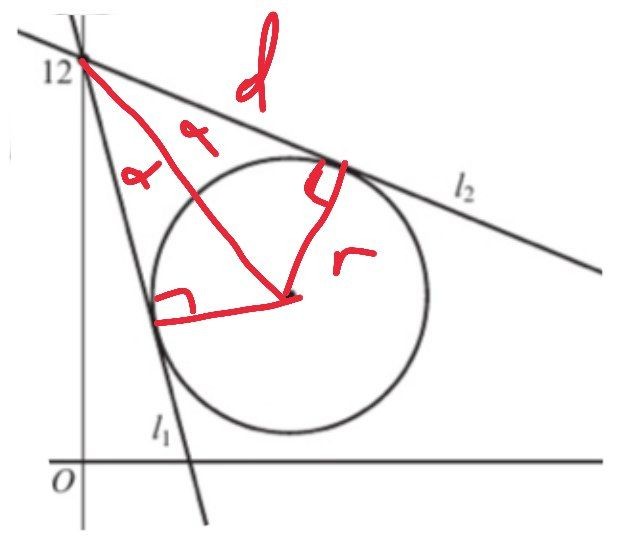 (Call the distance from the intercept to the centre of the circle, D, I forgot to mark that)

We can immediately see that

We know that both tangents have lines with formulae y = 12 - mx, because they are straight lines passing through (0,12). Note that ive used "-m" for clarity here, we expect two negative numbers, although mathematically its cleaner to use "+mx".

So the tangents have equations:

Not a quadratic in sight!

In general, converting questions about tricky tangents to circles, into questions about right angle triangles based on a radius and a tangent to a circle, is a trick that should be in any mathematician's toolbox.

graphically, one can confirm that only 2 such lines exist. and when solving for m, this fact should be reflected as well

Not the answer you're looking for? Browse other questions tagged geometry analytic-geometry circles tangent-line or ask your own question.

0
2 dimensional coordinate geometry
2
Find the equations to lines that are tangent to a circle
0
How to find equation of two tangents at 2 points on a circle?
1
Prove that the line which connects a point and a circle center and two tangent lines are perpendicular
1
Using the discriminant to find the equation of tangents to a circle
2
Geometry problem with parabola and two tangents which intersect
1
Direction cosine of three mutually perpendicular lines in 3D