What does it expression tells us when we write Shannon entropy in terms of continues distribution?

Shannon information is defines as, \begin{equation} H(p_1, p_2,...p_n) = - \sum_{i=1}^{N} p_i log p_i.\end{equation} For continues distribution, we can write shanon information as, \begin{equation}H(x) = \int^{\infty}_{-\infty} p(x) log p(x).\end{equation} For equation one, it is for discrete case. It is showing shanon entropy for set of N outcomes. I want to ask that for continues distribution, we are taking integration limit to infity. what does it means does it means that we are considering infinite number of events? can we take integration from 0 to 1 or 0 to 2?

For continuous probability distributions, we have what is called differential entropy. For a continuous random variable X with probability density function p(x) defined on the interval I, the entropy is given by the expression as you have given, $$H(X) = -\int_{I}p(x)log(p(x))dx$$ For example, Let's say we have a normal probability distribution given by, $$p(x) = \frac{1}{\sqrt{2\pi}}e^{-\frac{x^2}{2}}$$ This function has a non-zero value everywhere in the interval I = ($-\infty,\infty$) and tends to zero at infinity and hence the limits of integration. Looks something like this, 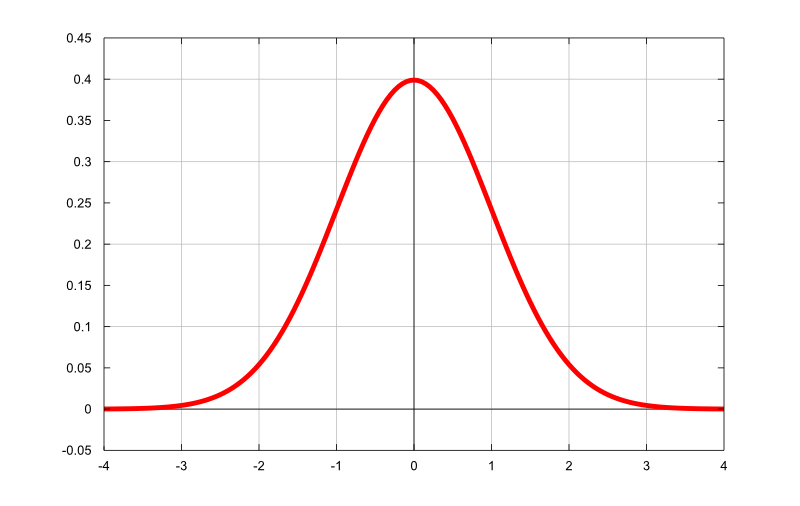 Continuous random variables are described by their probability density functions, and give distributions like the height of a population etc.

From an information theory point of view we can ask how much information we receive when we observe a specific value for a random variable $X$, if we are told a highly improbable event has just occurred we will receive more information than if we are told a very likely event has just occurred ( make sure you understand this sentance because it is at the heart of the description of entropy, this link will help : https://www.quora.com/Why-does-an-unlikely-event-give-us-more-information-than-a-likely-event#:~:text=The%20higher%20the%20probability%20of,previous%20beliefs%20will%20be%20disrupted. )

Using these two facts, one can show that $h$ must be given by the logarithm of $p$, so that

Your question : $"\textbf{can we take the integration from 0 to 1 ?}$" Answer - no you must integrate over the support of the distribution of your random variable, by the above construction it would not make sense to do otherwise.

There is a more in-depth discussion of entropy from a information theory and statistical mechanic point of views in the book "Pattern Recognition and Machine Learning" of Bishop - as well as a detailed description of going from the discrete to the continuum.

Not the answer you're looking for? Browse other questions tagged statistical-mechanics quantum-information entropy mathematical-physics probability or ask your own question.

3
Huffman codes: does less entropy imply less weighted average codeword length?
0
how to find the maximum of the cross-entropy of a discrete random variable?
0
prove $ \sum_{i=1}^{n}= I(p_i) \ge n \log n$ self entropy
2
What does entropy capture that variance does not?
4
What do the level sets of the Shannon entropy look like?
1
Does any probability distribution have an entropy defined?
1
How to interpret that a distribution does not have defined entropy (or has infinite entropy)?