From an arithmetic standpoint, it seems like it should be $0^\circ \mathrm{F}$, but that seems inconsistent because the result represents a delta ($0 \,\Delta^\circ \mathrm{F}$ perhaps) which is conceptually completely different. Doing math with units like $^\circ\mathrm{F}/s$ completely breaks down.

Is there a convention for doing arithmetic on Interval Scale measurements? That same page suggests there is a difference operation for them in its comparison table.

For context, I'm working on a Python library for doing dimensioned arithmetic (with an eye towards the natural sciences) and interval scales are making things complicated. For instance, $^\circ\mathrm{F}\cdot s$ doesn't seem to represent a meaningful physical dimension; it can't be converted to $\mathrm{K}\cdot s$. For example, trying to convert $6^\circ\mathrm{C}\cdot s$ by visualizing temperature and time as axes: 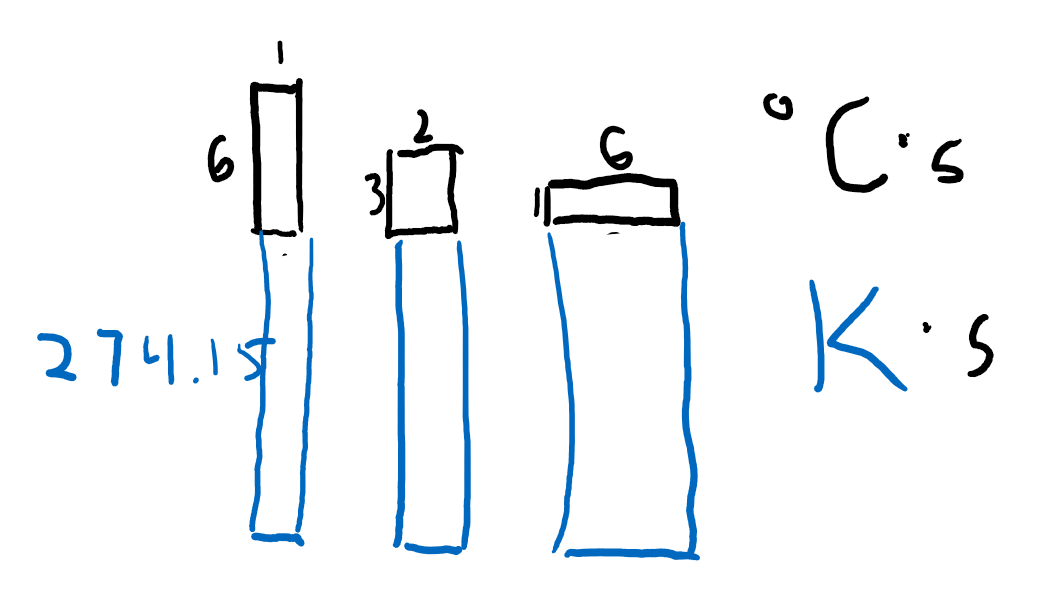 There have been great answers so far, but I'd like to focus on the practical implementation side of this. Which operations do you implement and how?

Temperature forms an affine line, no matter which unit you're using. It is much like with dates and time: you cannot add last Tuesday to 17 October of 2015, what would that even mean? And so Python does not let you add two instances of datetime. You can subtract them, though, giving you a timedelta object.

One of the following (well, both are true, but they're different statements):

If we treat these two things as basically different units, then we can make relatively sane mathematical statements. We can also distinguish, e.g.:

Your question is analogous to how we deal with time, and it is like asking "If you subtract 3 PM from 5 PM, do you get 2 PM or 2 AM?"

The answer is neither. The correct answer is 2 Hours.

This seems more like a physics question than a mathematics question. The way that I learned this (in physics class) was $$5^\circ \text{F} - 5^\circ \text{F} = 0 \text{F}^\circ$$Meaning that the difference between two temperatures measured in Fahrenheit such that both are 5 is zero degrees of Fahrenheit. Note that the degree symbol moves. That's how we know that the first two numbers are temperatures and the third number is a temperature difference.

It might be easier to write this library with strong types. I'm not sure how difficult that is in Python. You want it to treat adding two temperatures like it would adding a number and a string, as an error condition. Meanwhile, adding a temperature difference is fine. Or subtracting two temperatures, although weirdly that would change the type.

This part of the question is incorrect, that the answer is 0 K from a natural sciences context:

From a natural sciences standpoint, it's 0 K, because an amount of heat minus the same amount of heat is no heat, but that seems inconsistent because everyone knows that 5 - 5 = 0, and this would instead yield 5 ℉ - 5 ℉ = -459.67 5 ℉, which may be surprising.

The relationship between heat transfer and temperature change is $Q = mcΔT$ where Q = heat transfer, m is mass of whatever you're making colder or hotter, c = specific heat capacity, and ΔT is the change in temperature. It is a thermodynamic process, not an arithmetic one. That is where I think the confusion is. You mentioned delta, but you need to decide whether you want to calculate a delta (change) in temperature, or heat transfer.

Fahrenheit (degree F) is a scale, kelvin (K, without the word "degree") is a measurement unit (and may be used as a scale as well).

Kelvins are additive. They can be added and subtracted and the results have direct physical meaning as long as one doesn't get a negative temperatures (and in some cases, even then).

If you looks for a measurement unit that is sized to the Fahrenheit scale, but has this useful property of the kelvin unit, look at the Rankine scale.

0 degrees Rankine are 0K (the absolute zero temperature), but the scale unit is equal to degree Fahrenheit rather than degree Celsius.

For context, I'm working on a Python library for doing dimensioned arithmetic (with an eye towards the natural sciences) and interval scales are making things complicated.

I recommend refraining from giving the impression that subtracting temperatures is a correct thing to do.

Per @EllieKesselman's physics-based answer on can subtract temperatures in a meaningful way in basic physics or related science.

Before calculus is taught, we do use $\Delta T$.

The example given in that answer assumes heat capacity $c$ as a constant, which for a real system it isn't. So while we might do this as a short-cut on the back of an envelope, we really don't subtract temperatures for serious results. We integrate various thermodynamic expressions with various constraints.

Relevant to the addition addition of temperatures is the reaction of Richard Feynman.

While the current example asks about subtraction

which is ~okay when done on envelope backs, once you've allowed for that it will be hard to avoid the temptation to then allow addition of temperatures as well.

From What Can We Learn from Richard Feynman’s Approach to Education?:

Then comes the list of problems. It says, "John and his father go out to look at the stars. John sees two blue stars and a red star. His father sees a green star, a violet star, and two yellow stars. What is the total temperature of the stars seen by John and his father?" – and I would explode in horror.

My wife would talk about the volcano downstairs. That's only an example: it was perpetually like that. Perpetual absurdity! There's no purpose whatsoever in adding the temperature of two stars. Nobody ever does that except, maybe, to then take the average temperature of the stars, but not to find out the total temperature of all the stars! It was awful! All it was was a game to get you to add, and they didn't understand what they were talking about. It was like reading sentences with a few typographical errors, and then suddenly a whole sentence is written backwards. The mathematics was like that. Just hopeless!

While others touched the physics aspect, that's not that relevant for you actually. You are a developer, and what matters is what your users will expect.

If I was a user of that library you develop, I would expect 0℉. Simply because if anyone would deal with absolute temperatures, he should use kelvins automatically. when I write 5℉ - 5℉, what anyone would naturally mean is "what is the temperature that is 5℉ lower than 5℉?"

Not the answer you're looking for? Browse other questions tagged dimensional-analysis or ask your own question.