This is yet another question about the proof on page 340 of Tristan Needham's Visual Complex Analysis (this is the only thing I've read in the entire book as it's the only proof of the crossing rule for winding numbers I could find online). For reference, refer to this image: 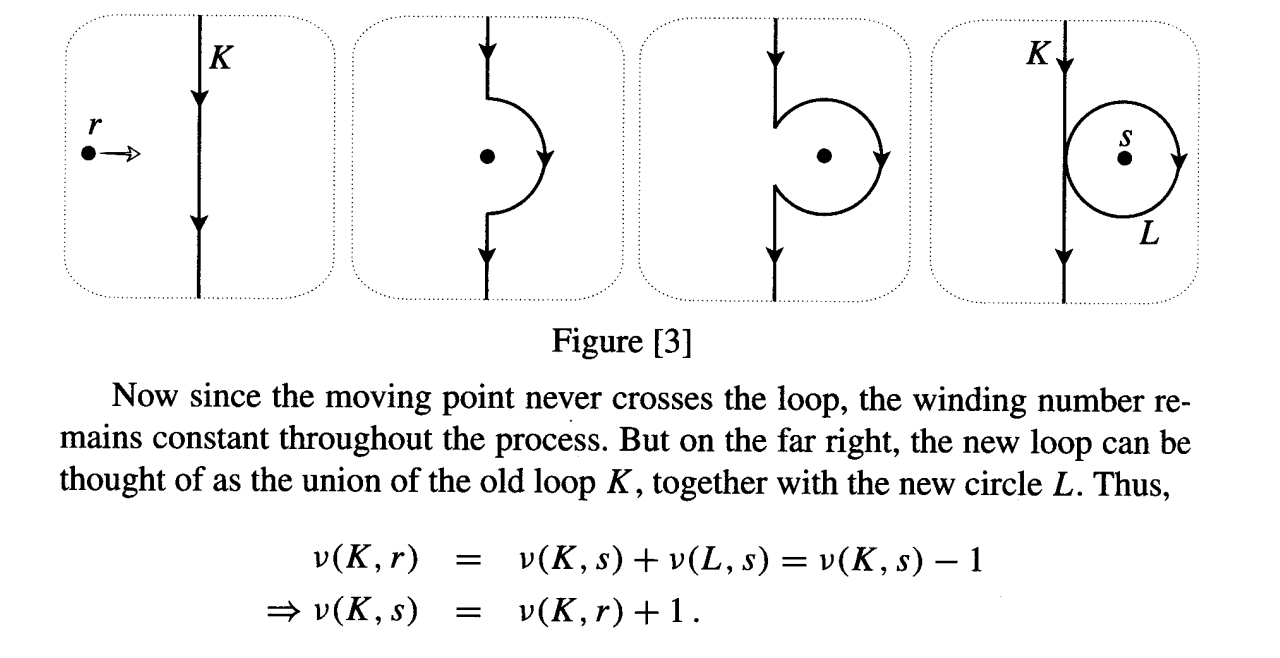 This proof is only intuitional imo. Sure, it's not very hard to write it rigurously if you have the right setting, but this is exactly my problem.

So, suppose we want to prove this statement of the theorem:

Now, in order for us to be able to use the proof in the book, we need the following setup: the curve $\gamma$ looks like a straight line near the two points $z_1$ and $z_2$. I know that we can "refine" the curve by an homotopy and preserve the winding numbers around the two points, but how can we make sure that they remain in adjacent connected components after this transformation of the curve? In other words, I want to find an explicit way of changing the curve such that after the transformation we can still explicitly find a path linking the two points that $\gamma$ passes through exactly once. Then we can bring the two points as close to the curve as we need along this new path in order to make sure that there is enough space for a circular loop around $z_2$ in its connected component (by using the fact that connected components of complements of paths are open).

I've been scratching my head at this for days and I couldn't find a way to make it work. Any help would be appreciated.

I think I finally made it work. It does use topology theory and I admit that I should have added the tag [topology] as well because my question falls a bit outside the area of interest of complex anaysis. (However, I don't have proper knowledge of topological spaces as per se, but topological results I will be using are valid and I have studied in the context of metric spaces, which are just a special case of topological spaces).

From this point onward we can use the method of proof presented in the refferenced book.

Sidenote: I've gone through the last part of the proof (the one adapted from the proof in Tristan Needham's book) in a faster pace because, even though it is fundamental to the proof as a whole, my question was about the setup I got before that part, and also because I've been writing on this proof for more than a week now and I really want to call it quits and not waste any more time on it. If anyone could help me complete the missing detail from the first part, I'd be thankful.

I will try to answer your question and I expect this to be useful for you. There is a theorem called Jordan curve theorem which states that any closed and simple curve determines uniquely two different regions of the complex plane (one is the interior of the curve, and the other is an unbounded component), then it seems that the theorem is relating the winding number of two different points given on the different regions determined by the curve. The first thing I'll try to justify is that you can put the points and the curve as in the figure (actually, the curve will not be modified), I will only give an intuitive reason why this is true: remember that $\nu (K,r)= \int_K \frac{1}{z-r} \,dz$, now in this expression take $r$ as a variable that moves only in the region where $r$ was given. It is a consequence of the general Cauchy theorem that as long as you remain on this region the winding number remains the same, I'm sure that if you look in any good complex analysis book you'll find a proof (seek for homology), but I expect it is not difficult just to believe it for now. So we can get $r$ closer to an arc of $K$ staying always in the same original region that it was given, and since $K$ is smooth (or piecewise), by getting $r$ close enough to $K$ eventually the arc will seem to be like a straight line. Now do the same with $s$, get $s$ closer to $r$, since I am assuming that $K$ is simple then this is in fact possible (but I will not prove it). Then we have now another two points $r,s$ with the same winding numbers than the original ones and which also look like in the figure. So we can assume the original points and the curve look as we want to. Now focus only on the third and fourth images of the figure. Take the curve of the third image and start to bring closer the two sharp points in order to get the fourth curve in the limit. Let's call $M_n$ a sequence of figures like in the third image which in the limit converges to the figure $K+L$ in the fourth image. Since the function $\frac{1}{z-s}$ is uniformly continuous in any compact set not containing $s$, then if take a compact set containing $K+L$ in it's interior, it is possible to say that the integrals $\int_{M_n} \frac{dz}{z-s}$ converge to $\int_{K+L} \frac{dz}{z-s}$. But all the first integrals are simply equal to $\nu (K,r)$ which is constant. And the limit is equal to $\nu (K,s)+\nu (L,s)$, so we get the equality between these values.

3
Crazy calculation for winding numbers
8
Determine the Winding Numbers of the Chinese Unicom Symbol
6
Showing that choice of point on a curve is irrelevant to finding $f(z_0)$ in the curve
2
Figuring out winding number of a curve using crossing rule of a point
2
Existence of rectifiable/piecewise $C^1$ curves between two points of an open connected domain in $\mathbb{C}$
2
Winding number is locally-constant for general curves (not $C^1$) using variation of argument definition
1
usage of Rouche's theorem for winding number in proof of Residue theorem
2
Prove or disprove that a Jordan curve exists that contains two points.
1
A region in $\mathbb C$ minus countably many points is path-connected
2
Evaluate complex integral $\int_{\gamma} (z^3 +z^2 -2) dz$ where $\gamma(t)=[-1,1,i,-1]$ is the closed triangular.