Where to draw circumscribed circle tangent to 2 circles

I'd like to figure out how and where to draw a circle which is tangent to two circles inside it. It looks kind of like this: 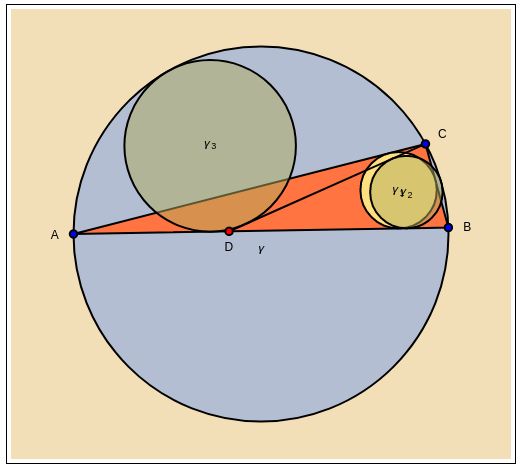 Basically in the diagram I'd like to make there are two circles (beige in the image) with known radii and a set distance between their centers. I'd like to draw a circle around them (blue in the image) which is tangent to both and whose center is on the line drawn between the centers of the smaller circles. What I need to know is, given those three parameters above, where the larger circle must be drawn on the axis between the centers of the other two circles, and what the radius of the larger circle is. I suppose the position might be a function of the radius but that's too big for my brain.

This is a link to the wolfram file I pulled that image from, if it helps at all.

Anyways, all help is appreciated! 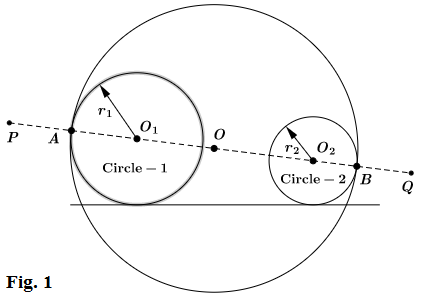 The answer to your question can be found by using either an analytical method or a geometrical construction. An analytical solution has been already posted by @GeometryLover. We give below a simple construction, which will help you to determine both the radius and the center of the sought circle.

The Circle-1 and the Circle-2 are given as shown in $\mathrm{Fig.\space 1}$. Their respective radii and centers are known. We start our construction by drawing the line $PQ$, which passes through the two centers $O_1$ and $O_2$. As shown in the figure, we denote the two of the four points of intersection between the two circles and the line $PQ$ as $A$ and $B$. Finally, we find and label the midpoint of $AB$ as $O$.

I found this construction while playing with Geogebra as @Blue has instructed in his comment. It is always worthwhile to heed advises from experts.

and the radius of the outer circle $r_3$ satisfies

What remains is to determin $t$, and for that, we can write,

Not the answer you're looking for? Browse other questions tagged geometry circles tangent-line or ask your own question.