One of my Fellows asked me whether total induction is applicable to real numbers, too ( or at least all real numbers ≥ 0) . We only used that for natural numbers so far. Of course you have to change some things in the inductive step, when you want to use it on real numbers.

I guess that using induction on real numbers isn't really possible, since $[r,r+\epsilon]$ with $\epsilon > 0$, $r \in \mathbb R$ is never empty.

Can you either give a good reason, why it isn't possible or provide an example where it is used?

Okay, I can't resist: here is a quick answer.

I am construing the question in the following way: "Is there some criterion for a subset of $[0,\infty)$ to be all of $[0,\infty)$ which is (a) analogous to the principle of mathematical induction on $\mathbb{N}$ and (b) useful for something?" The answer is yes, at least to (a).

Note that in case $(X,\leq)$ is a well-ordered set, this is equivalent to the usual statement of transfinite induction.

(Unfortunately in the proof I said "least upper bound", and I suppose the point of proofs by induction is to remove explicit appeals to LUBs. Perhaps someone can help me out here.)

Acknowledgement: My route to thinking about real induction was the paper by I. Kalantari "Induction over the Continuum".

His setup is slightly different from mine -- instead of (ii) and (iii), he has the single axiom that $[0,x) \subset S$ implies there exists $y > x$ such that $[0,y) \subset S$ -- and I am sorry to say that I was initially confused by it and didn't think it was correct. But I corresponded with Prof. Kalantari this morning and he kindly set me straight on the matter.

For that matter, several other papers exist in the literature doing real induction (mostly in the same setup as Kalantari's, but also with some other variants such as assuming (ii) and that the subset $S$ be closed). The result goes back at least to a 1922 paper of Khinchin, who in fact later used real induction as a basis for an axiomatic treatment of real analysis. It is remarkable to me that this appealing concept is not more widely known -- there seems to be a serious PR problem here.

Added Later: I wrote an expository article on real induction soon after giving this answer: it's very similar to what I wrote above, but longer and more polished. It is available here if you want to see it.

There's a phenomenal paper by Don Zagier which uses a sort of induction over the real numbers to give an explicit solution to some recurrence relations (which, it just so happens, calculate the Betti numbers of the moduli space of central Yang-Mills connections on bundles over Riemann surfaces). But you don't need to understand those words to appreciate Zagier's paper. The reference is:

Such results on continuous induction are folklore dating back over a century - much older than the references in the Kalantari paper referenced by Pete L. Clark. I once had a large file of papers on this topic but, alas, it's long lost. But I can still recall one old paper [1] because the author was the world-renowned multi-talented Chinese linguist Yuen Ren Chao. If memory serves correct he did his thesis under Sheffer at Harvard on aspects of the continuum, so his BAMS paper was probably an offshoot of his thesis. Since Project Euclid seems to be having intermittent problems I have appended the short paper below. For some biographical information on Chao see here1 and here2. 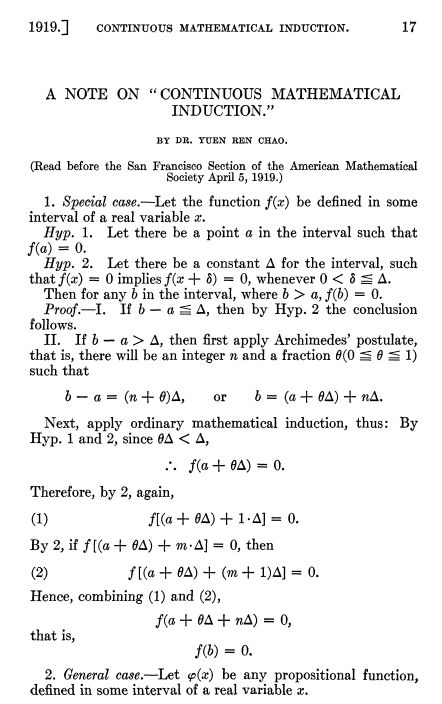 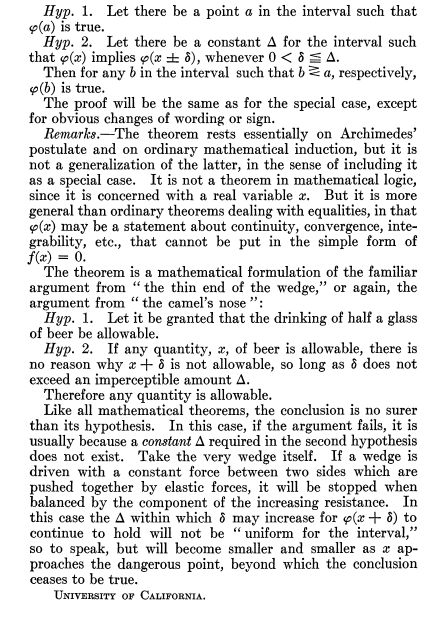 You can interpret mathematical induction on the natural numbers simply as "proof according to the method using which the world in question was constructed". The construction of $\mathbb{N}$ is inductive in nature, so it makes sense that induction should work. For a similar reason, you might want to accept the following as an induction method on $\mathbb{R}$:

Suppose that there is given a set $A \subset \mathbb{R}$ with the following properties:

If you assume a particular limit ordinal for the cardinality of the reals, you can prove new theorems about them using transfinite induction with a bounded limit case! But I doubt these theorems have any application.

The other answers are very interesting but it is hard for me to believe in a process truly analogous to induction on a set which cannot be well-ordered. The ability to well-order the reals depends on the Axiom of Choice, and the precise consequences of such an ordering depend on the Continuum Hypothesis.

In the case of $[0,\infty[$, perhaps this looks like induction:

After reading Pete Clark's excellent answer, I realized there is an interesting way to think about this real induction principle as an adaptation of a more general (and more trivial) notion of "topological induction" on connected spaces.

Then $S=X.$ [(1) and (2) are slightly different from Pete Clark's, but it is straightforward to check that they are equivalent.]

1
Higher order differentiation of logarithm function by induction
3
How to Handle Stronger Induction Hypothesis - Strong Induction
17
Why can mathematical induction only be used with natural numbers?
0
Trying to correctly write the proof using *strong* induction of the sum of the nth positive integer
1
Am I properly using induction (specifically the induction hypothesis)?
1
Induction on a double summation
2
Why is induction considered reliable and fool proof?
1
Can infinitesimals be used in induction to prove statements about all real numbers?