Are all real and imaginary numbers complex numbers? 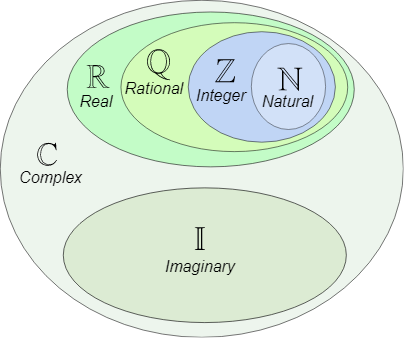 rschwieb: It would make me happy to just eliminate the blob with 𝕀 altogether. $\quad$ Yes that’s true, actually; the set of prime numbers is arguably more deserving of being singled out in this Venn diagram.

P.S. I’d never encountered the symbol $\mathbb I$ (which here denotes the set of imaginary numbers) prior to this, but apparently, in the days of yore, it sometimes denoted the set of integers...

Not the answer you're looking for? Browse other questions tagged complex-numbers definition real-numbers or ask your own question.

53
Set Theoretic Definition of Numbers
12
What is the symbol for primes?