I'm having some problems to understand the geometry involved in the section 3.1 of the paper Two Dimensional Yang-Mills, Black Holes and Topological Strings. 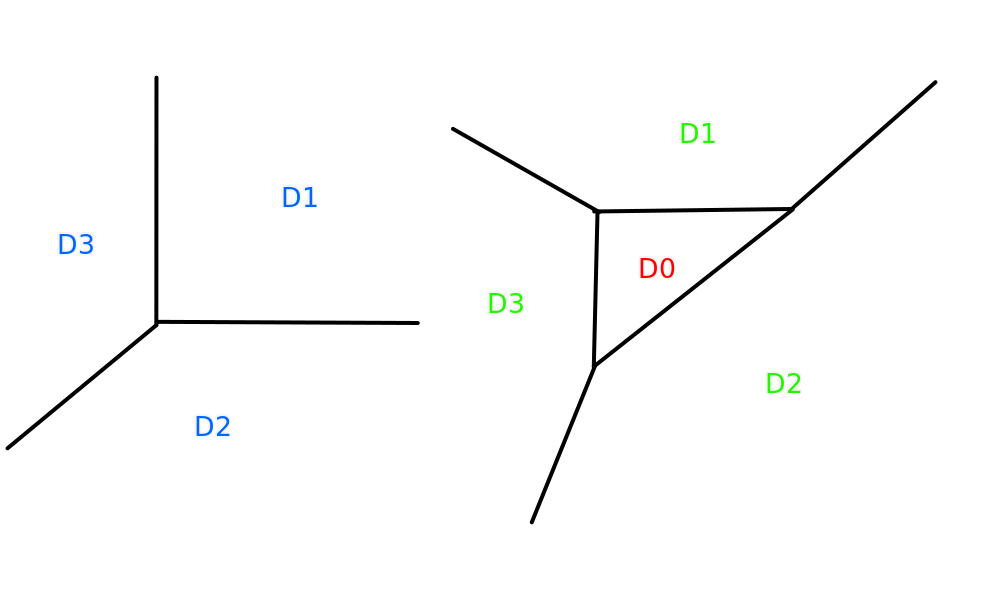 The good news is that there is still a nice Lagrangian torus fibration on your space, the base of which inherits an integral affine structure which encodes everything about the total space, just like in toric geometry.

First let's think about $T^2=S^1\times S^1$. This has a Lagrangian torus fibration over the circle: just projection to one of the $S^1$-factors. You can imagine the base of the fibration to be the interval $[0,1]$ with its ends identified. This is not toric because the base is a circle rather than a polytope, but it's a polytope with identifications, and that's what we'll get in your case too.

Now, as a warm up, what about a complex line bundle $L$ over $T^2$? Pick a Hermitian metric on the line bundle and take the squared radius function as a Hamiltonian $H_1$; for a suitable choice of symplectic form, this generates a circle action which just rotates the fibres of the bundle. If we take $H_2$ to be the function which projects the line bundle down to $T^2$ and then postcomposes with the projection to $S^1$, the combined function $(H_1,H_2):L\to[0,\infty)\times S^1$ is a Lagrangian torus fibration. Now the base inherits an integral affine structure because it's the base of a Lagrangian torus fibration, but it is not the obvious product affine structure unless the bundle is trivial. It turns out that the right way to think about the base is as follows.

Consider the matrix $M=\begin{pmatrix}1&n\\ 0&1\end{pmatrix}$ acting on $\mathbb{R}^2$. Let $V$ be a vertical ray emanating up from the origin, and let $P$ be the non-compact region bounded by $V$ and $MV$ on either side and by a horizontal line at height $h$ below. Identify $V$ with $MV$ via $M$. This is the integral affine base. In other words, the "moment image" is $P$, and whenever you walk out of $P$ across $V$ you re-emerge on $MV$; tangent vectors are also twisted by $M$ when you cross this branch cut. After making the identification, the horizontal line at the bottom of $P$ becomes a circle: this is where your zero-section $T^2$ projects. The integer $n$ is (minus) the Chern class of the line bundle: if $n$ is negative (positive Chern number) then $V$ and $MV$ intersect and you have to take $P$ to be a neighbourhood of the horizontal line instead of a non-compact wedge. If $n=0$ then you just take $M$ to be an affine translation instead of a shear matrix.

Now we come to your example. Something similar should work. Suppose your two bundles have Chern numbers $-m$ and $-n$. I think you want to take the matrix $M$ to be $\begin{pmatrix}1&m&n\\0&1&0\\0&0&1\end{pmatrix}$ and your polytope $P$ will be some kind of 3d wedge which intersects the $xy$- and $xz$-planes in the wedges I described for the 2d case (i.e. put these wedges into those planes and take the convex hull). Now identify the faces of $P$ using the matrix $M$. Again, because you want one of your Chern numbers to be negative and one positive, your wedge will look a bit odd (the rays will intersect): again, just take the "germ" of the polytope along its compact edge and you will get the "moment image" of a neighbourhood of the zero-section in your bundle.

(This phenomenon already happens in toric geometry: for example, a line $H$ in $\mathbb{CP}^2$ has normal bundle $\mathcal{O}(1)$. When you look at the moment polygon, a triangle, the two rays emanating from the vertices at the end of the edge corresponding to $H$ intersect. To get the normal bundle of $H$ instead of $\mathbb{CP}^2$ you just cut out the third corner of the triangle.)

Not the answer you're looking for? Browse other questions tagged string-theory mathematical-physics algebraic-geometry or ask your own question.

8
Definition and examples of Calabi-Yau varieties
2
CY 3-folds are $T^2 \times \mathbb{R}$ fibrations over the base $\mathbb{R}^3$. What does it mean?
3
Calabi-Yau manifold with fiber structure
1
Recovering data about the toric fan from minimal information
2
Constructing projective Calabi-Yau varieties