Guessing number of colors of beads in an urn

Every time when I order the cocktail “Latex and Prejudice” (“Латекс и предубеждение”) in the Tesla bar in Saint Petersburg (Russia) the barkeeper selects by random a small interesting photo$^1$ and attaches it with a clamp to the cocktail glass. At the beginning I got always different pictures and started to collect them. The more cocktails I ordered the more often the motifs repeated. Finally, I had drunken so much that almost every time I had to ask for a different photo. I was wondering how many different pictures there are but due to drunkenness couldn't solve the problem by myself.

Given is an urn with an unknown number of balls that have an unknown number of colors. It is assumed that every color has equal probability. From this urn in total $n$ balls with $m$ different colors were drawn, $k_i$ balls for color $i$ were sampled, i.e. $n=\sum_{i=1}^m k_i$. How many different colors $M$ are in the urn? Sampling with and without replacement is of interest.

Some answers were already given. Now I am looking for either alternative answers or/and answers to the following more specific questions:

In this SE post the number of colors in the urn is also unknown but in the problem given here it is assumed that the colors have equal probability. Another SE post deals with lending books from a library that were already lent at an earlier time.

$\small{^1 \text{Because the site is accessible to minors,$\\$ the content of the photos is not discussed here.}}$

Answer: The best guess for the number of colors in the urn is given by that value of $M$ that maximizes $p_1$ for an assumed $K$. 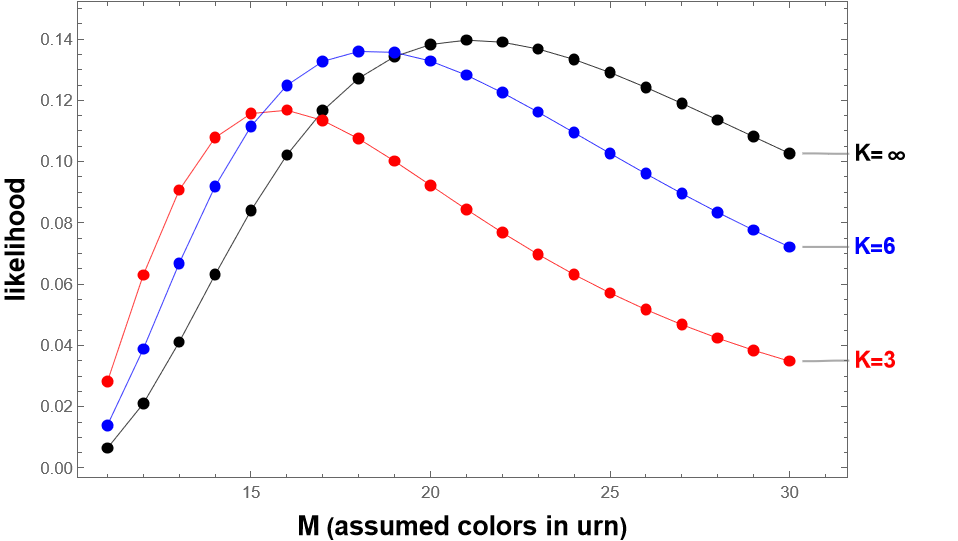 Let $n$ be the number of balls sampled, $m \leq n$ the distinct colors seen, and $k_c$ the frequency of color $c$.

When answering questions of this form (I drew from an unknown distribution, after seeing the observations, what's my guess of the distribution?), you can start by asking yourself: If there were $M \geq m$ colors, what would the likelihood be that you saw the draw that you did?

You could find some answer to that. It would have the shape you expect: if the $k_c$ are on average high, then your guess would be that it was pretty unlikely; if the $k_c$ are low then the opposite. Call this quantity $f(M;n, m, \{k_c\})$.

But how do you put this together? Where does this bring you? Can you answer a question such as "what's the expected number of distinct colors"?

It turns out we can't just yet. Why not? We have infinitely many $M \geq m$, and it's not so simple to just take an "average" over infinitely many terms. In terms of bayesian probability, you first need a prior -- before seeing the results of any draws, what was your guess on the (distribution of) the number of distinct colors in the bin?

Why do we need this? You might complain that, if there were finitely many possibilities, we could just happily take an average and move on. But this is the same as what we just discussed -- you just chose the prior that all of the finitely many outcomes were equally likely. You'll have to do the same here.

So, what are your priors? Well, I've never been to this bar, but as a silly upper bound I'd be pretty certain they have less than 1,000,000 different photos. It's probably likely to be less than 100, too. I'd guess it's more likely to be 15 than it is to be just 3 (and after you see your fourth independent picture, you update your prior such that the probability that there are only three pictures is now zero!).

Of course, the sum of $p'(M)$ over all $M$ is $1$ by construction, so the above summation is really just the expected value of a random variable.

Apologies for the somewhat nebulous answer here, but hopefully this gives you a place to start for how one might think about questions like these.

where $n_i$ tells how often a species was observed $i$ times and $N$ is the sample size.

The right term in eq.$(2)$ is only needed in case $n_1=0$. This estimator assumes that every color is often present in the urn (drawing with replacement) and is known as Good-Turing estimator in other areas.

This number is not a bad guess compared to $21$ colors one got by more effort in the other answer.

Not the answer you're looking for? Browse other questions tagged probability combinatorics statistics recreational-mathematics multinomial-distribution or ask your own question.

14
How many books are in a library?
13
How to estimate the number of articles on Wikipedia using the "random article" function?
4
Unknown number of colours Bernoulli Urn
2
Estimating the number of chips in a bag
0
Determine Population Size from sample.